The opening of Ira Levin’s Deathtrap this weekend marked the start of the 50th Season for Silver Spring Stage. The play, which opened on Broadway in the late 1970s, is a suspense thriller with lots of laughter. The play, directed by Roxanne Fournier Stone and produced by Alika Codispoti, is full of plot twists that will have you on the edge of your seat.

The plot revolves around an egotistical playwright, Sidney Bruhl (J. McAndrew Breen), who pens – no surprise – suspense thrillers. Bruhl has not had anything approaching success in years. He is now teaching in a local school. He has been primarily living off the money of his wife of over 10 years, Myra (Kryss Lacovaro), on a small estate in Westport, Connecticut. Bruhl gets a manuscript in the mail from one of his students, Clifford Anderson (Nicholas Temple). Anderson’s play appears to have the makings of a huge success. Bruhl invites Anderson for a visit to his home in hopes of being able to collaborate and get part of the money from the profits of the play. To tell you more would be giving things away.

Levin adds a European medium, Helga ten Dorp (Declan Cashman), who by chance, is visiting nearby. This lends some more mystery to the plot, and a great deal of comic relief. Cashman is very funny as ten Dorp. She is truly both eccentric and conniving, and her visionary scene in Act I is one of the delights of this comedic thriller.

Breen is a fine Sidney Bruhl: pompous, duplicitous and sometimes not as smart as he would like to be. His best scene is at the beginning of Act II, when he tries to open a locked drawer. It typifies the play – funny and suspenseful.

Lacovaro deftly plays the wife, who has long ago learned to cope with her egotistical husband and his vanity. Lacovaro’s highlights include her final scene in Act I. She helps heighten our suspense.

Temple captures the young writer perfectly and, again, without giving away plot twists, he more than capably strips away the layers of this aspiring writer’s personality.

Gary Sullivan is a nice surprise as the Bruhls’ lawyer. He brings a great deal of energy to the character, Porter Milgrim, even though he is only briefly on stage.

Stone keeps the pace moving and allows her actors to create interesting and memorable characters.

Maggie Modig designed the complex set that has several entrances, including French doors, and a staircase. I appreciate how they created the partner’s desk in Act II, as well as enjoy all the weapons on the wall and shelves of the house.

Joy Wyne, assisted by Nancy Davis, created the lights that help enhance the suspense of this play by creating moods, especially at the end of Act II.

Roger B. Stone did the sound and that also helps create some of the mood. However, I am not sure the background music before the thrilling scenes is necessary.

The play is still a thrill after almost 40 years, though some of the references that added to the original comedy are now dated. On the other hand, there is still enough humor to keep this melodrama lighter than most thrillers.

Deathtrap is a fine beginning to Silver Spring Stage’s 50th Season. It is one of the classic American thrillers. Shoot on down to the theater to catch this wonderful show.

Running Time: Two hours and 30 minutes, with an intermission. 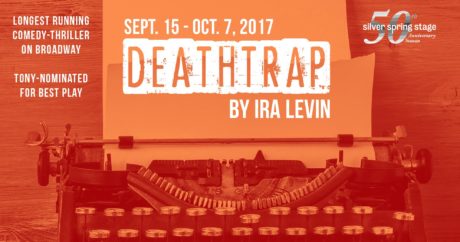 NOTE:
Silver Spring Stage will be holding an Anniversary Gala on Oct. 15th at 6 PM at the Silver Spring Civic Building. Check here for information or to purchase tickets online.