I heard Kris Kringle (played by Harley Venton) tell little Susan Walker (Leah Packer): “…Imagination is a place all by itself. Now, you’ve heard of the French nation? … And the British nation? … Well, this — is the Imagination!” And I believed it because he is the real Santa Claus!

Were it not for imagination, humanity would be a worrisome endeavor altogether. Fortunately, we are blessed in Montgomery County, Maryland with a rich community theater environment. Especially as the holiday season approaches, any opportunity to suspend reality and use our imagination is welcome relief. 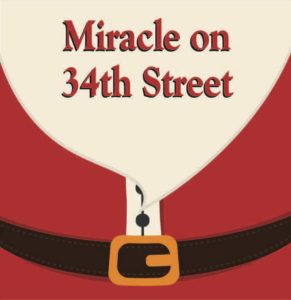 If you hurry, you can witness Miracle on 34th Street as it was performed almost 70 years ago. Sandy Spring Theatre Group presents a reenactment of the live 1940’s era radio broadcast by Lux Radio Theater. Live sound effects (created by Bob Schwartz) and laundry detergent commercials add to the nostalgia as the staff of Macy’s Department Store wrestle with the true identity of their store Santa Claus.

Susan Walker’s mom, Doris Walker (ML George) hired a last minute stand in to replace their inebriated regular Macy’s Santa. But when the replacement says he actually is Kris Kringle i.e., Santa Claus, the confusion begins. Fred Gailey (John D.Van Eck) is a lawyer and friend of the Walkers who comes to defend Mr. Kringle after he is fired and sent to the psychopathic ward in Bellevue Hospital. Gailey intends to prove to Judge Harper (Ed Silverstein/producer) that “Mr. Kringle really is the Santa Claus.” This infuriates Mr. Mara (Ronald Araujo) the Assistant District Attorney who is prosecuting the case against Mr. Kringle.

The rest of the cast – Mara Bayewitz, Jim Kitterman, Susan Aaron Ostrinsky, Evelyn Renshaw, and Rowan Titus weave their way in and out of supporting roles with dizzying speed and enthusiasm. Scene changes are signaled by the creative lighting talents of Joe Connor as the cast waltzes between 3 authentic standing studio microphones and other creative set pieces by Jerry Callistein. All this action and drama take place under the direction of Bill Spitz who continues to delight audiences during his 30+ year career in community theater.

This production is a unique opportunity to show kids and grandkids a glimpse into early entertainment! But hurry – the show closes after Saturday’s performance!

Running Time: 67 minutes with no intermission.