Last night, the Mason Players opened another excellent student-directed play at George Mason University. Following strong performances of Deadman’s Cell Phone and 1984 earlier this semester, The Pillowman by Martin McDonagh, currently at George Mason University, is terrifically performed, clearly communicated, well-directed, and intriguingly designed. Director Hollyann Bucci changes traditional casting to further the exploration of power issues in the play. It is an important directing choice which strengthens the play and the actors make it work. Bucci’s talents and strong choices are visible throughout the production. 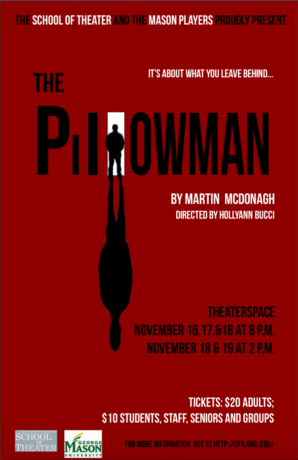 The material, like much of the playwright’s work, is challenging. The subject matter is dark, the characters’ actions are suspect, and the audience is forced to frequently reassess how they are defining right and wrong, and who is guilty or innocent. The police are interrogating a writer, whose short stories seem to have some connection to a murder investigation of three children. Police brutality, censorship, and other rights violations are surprisingly punctuated in the play through both humor and acts of compassion, and the audience is increasingly caught up in the chase for the underlying truths of the story.

The acting is led by Catherine Gilbert as the writer Katurian, who values her own art above all else. It is a standout, brave performance which helps the audience believe her character’s frightening journey. Katurian’s sister is delightfully portrayed by Em German, whose use of language, both spoken and signed, developed a character the audience can love and be startled by. Ryan Phillips, as Ariel, played the “bad cop” gloriously, as he is balanced by Ben Maderi playing detective Tupolski, the “good cop” in a performance from which you can’t look away. The imbalance of power between cops in an underground interrogation room, in a totalitarian state, is so palpable, the play feels almost farcical at times. Maderi and Phillips bring much of the needed humor, as well as pathos of the production.

Lauren Fraites, Kati Joyner, Brandon Lock, Sumona Banjeri, Tylor Gorshwin, and Jacquelyn Smith are excellent in supporting roles as the movement ensemble that plays out Katurian’s stories as they are being read. Michael Cherry designed an interesting, if non-specific set, which allows the ensemble to use the space dynamically, and costumes and make-up design by Alex Wiemeyer, are inspired and intriguing, especially for the ensemble.

In this production of The Pillowman, the story takes over and feels inevitable. For Katurian and the play, the art is the vital thing that must survive. Despite the challenging subject matter of the piece, this art is well worth seeing.

Running Time: Three hours and 15 minutes with one 15-minute intermission.