A Midnight Dreary is a promenade-style event that will have you on your feet, enjoying a drink, and experiencing Edgar Allan Poe’s stories like never before. The performance, directed by Bridget Grace Sheaff and starring Raven Bonniwell, Kerry McGee, and Jon Reynolds, explored the Capitol Hill Arts Workshop with inventive enthusiasm.

The actors play many roles and use Poe’s prose as their dialogue, except when they need to break from the script to do a bit of crowd wrangling and encouragement. But never fear – for those afraid of being put on the spot, there is only the merest hint of audience participation. The most delightful part of the audience involvement in the production is that everyone is treated to a thematic cocktail to go with their evening – a spicy, cranberry concoction that calls to mind a winter fireside tipple.

Your actors and guides for the evening are clad in Edgar-Allan-Poe-meets-Little-Tramp-style black and white waistcoat outfits and Poe mustaches (yes, even the women). The first story, “Masque of the Red Death,” was staged in the main gallery with what sounded like the adult basic tap class going on upstairs, unfortunately. We Happy Few injects the usually morose Poe with welcome wit, as the actors portray the shallow revelers, Prince Prospero, and the terrifying interloper. 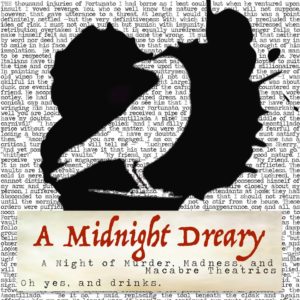 The audience heads downstairs for the second story where the basement of CHAW serves as the catacombs of “The Cask of Amontillado” where Fortunato, played with hilarious drunkenness by Raven Bonniwell, meets his end (accompanied by the unintended cheerful attempts of a promising beginning piano student in the adjacent studio). For the final story, “The Tell-Tale Heart,” the audience was back upstairs for a drink refill and a performance in a quieter location where Jon Reynolds’ amusing narrator switched from manic to quite mad on a dime.

There’s no music, per se, but the actors provide their own sound cues throughout using drums and some very skillful wineglass playing. They also occasionally provide an a cappella verse or two. It’s a fairly casual production, with the audience close to the action, so it was a little distracting that the props and production pieces were more suggestions rather than elaborately designed. I doubt Prince Prospero’s guests would have stood for actual red SOLO cups. The cast was flexible and spirited, moving fluidly between roles and stories, though they occasionally stumbled over Poe’s purple prose.

Though no current future dates for this production are in the offing, keep an eye out for it. We Happy Few has performed in bars and other locations that seem more atmospherically appropriate for the stories chosen. If you are looking for a fun, creative treatment of familiar stories with a bonus tasty cocktail, We Happy Few is here to oblige.

A Midnight Dreary played one night only at the Capital Hill Arts Workshop – 545 7th Street, SE, in Washington, DC. For information about upcoming We Happy Few productions, visit them online.