This report on New Records includes three Alan Menken shows that recently received fresh recordings, plus a Broadway show from this year that unfortunately closed after a modest run. 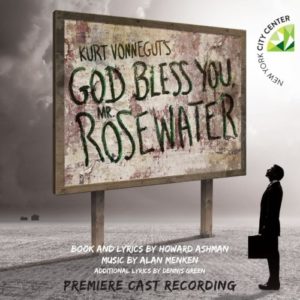 For years, I’ve wondered what the first Alan Menken-Howard Ashman show sounded like. In 1979, three years before their Little Shop of Horrors, the two young men produced God Bless You, Mr. Rosewater, based on a Kurt Vonnegut novel of the same name. It ran briefly off-Broadway and was not recorded. Vonnegut based his socio-political satire on Barry Goldwater and the rise of a new, belligerent hard-right movement. Their musical version came to the stage as Ronald Reagan was about to win the presidency and implement policies similar to Goldwater’s.

The tale tells of a millionaire from Indiana, Eliot Rosewater, who decides to give his money away to underprivileged citizens. New York City Center’s Off-Center company revived the show in 2015 and Sh-K-Boom/Ghostlight recorded the score. Composer Menken and lyricist Ashman went on to write some of the most successful movie musicals of all time — The Little Mermaid, Beauty and the Beast, Aladdin — before Ashman’s death from AIDS.

James Earl Jones lends his iconic basso to this recording, playing what’s billed as “Voice Not Unlike God’s.” Santino Fontana is the idealistic title character and Skylar Astin sounds gleeful as a young shyster lawyer who tries to prove that Eliot is bonkers.

The music is punchy and optimistic, slightly reminiscent of the Gershwins’ Of Thee I Sing and, at other times, Gilbert & Sullivan patter. Rosewater describes his home turf,

A town where the economy’s depressing
And the people are completely obsolete.
The railroad hasn’t run through here for ages
And the factories are automated too.
So the pretty people leave this town at twenty
As does anyone with much of an IQ.

Chris Fenwick leads a 17-piece orchestra on this CD, playing Danny Troub’s orchestrations. This is a fine introduction to the melodic contributions of Alan Menken. 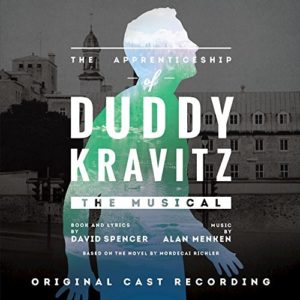 In 1987, Menken and lyricist David Spencer’s The Apprenticeship of Duddy Kravitz, based on a 1959 novel of the same name by Mordecai Richler, was produced in Philadelphia. It was restored, with revisions, in 2015 in Montreal, the city where its story is set.

Duddy Kravitz is a coarse, brash punk growing up poor and Jewish in Montreal in 1949. His cab driver father Max is proud of Duddy’s older brother Lenny, whom a rich uncle is putting through medical school. Only his grandfather shows Duddy any attention. He gets a summer job as a waiter at a kosher resort hotel and eventually makes connections with gangsters to get ahead. Using shady methods and betraying his friends, Duddy becomes a land developer. The ending reveals Duddy, broke, expressing some idealistic dreams and saying “it’s time to be a man” while his grandfather turns away with disgust.

I’d love to see this dark musical. I fear it lacks a big future because the title character is unappealing, although Rodgers & Hart’s Pal Joey proved that occasionally that obstacle can be overcome. This musical’s unflinching look at a crass achiever certainly is timely.

The recording is by the all-Canadian cast from the Montreal revival. The score contains catchy, circus-like numbers and also ballads which remind us of what was being written by Broadway giants in the time where Apprenticeship is set. One of the show’s best aspects is the fluency with which the songs tell the story. As in the golden days of LPs, the listener can easily follow the plot.

George Masswohl as Max has a tender ballad about his late wife, “I’m driving along/ I make like she’s there./ I’m talkin’ to her / I’m talkin’ to air.” The title of that superb song is “Unfinished Business.” Marie-Pierre de Brienne as Duddy’s girlfriend brings poignancy to “How Could I Not?” and “Welcome Home (Can you be at peace?)” Ken James Stewart is an adolescent-sounding Duddy. 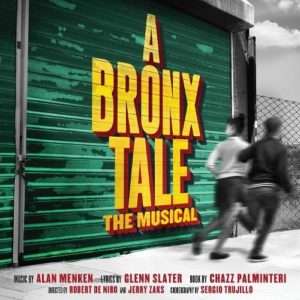 We’ve seen a common theme of musical fathers who drive vehicles for a living. In the Heights and The Apprenticeship of Duddy Kravitz showed them driving cabs, and in A Bronx Tale it’s a bus. These are hard-working, struggling people in a poor part of their city.

Menken’s music, with Glenn Slater’s lyrics, is street corner doo-wop. “Connolis on tray after tray/ Salamis strung up on display/ And Italians are all that you see.” The style is quite different from Menken’s Disney scores; more resembling his Little Shop of Horrors.

It reflects the neighborhood of Chaz Palminteri, who developed a one-man show into a Robert De Niro-directed movie, and now this musical. We’ve heard echoes of this world in Grease, but this score sounds grittier and more authentic.

Bobby Conte Thornton and Richard H. Blake are realistic, with great Bronx accents, in the lead male roles of Calogero (Palminteri’s original name) and his father. Nick Cordero is properly aggressive as Sonny, who teaches the ropes to the kid.

As in Duddy Kravitz, this story has an old-fashioned, clean-living father at odds with a rebellious son. Unique characters are trying to stay out of trouble while parents constantly worry. In “A World Like This” and “The Choices We Make” Menken provides uplifting ballads. Women’s roles are subservient, but Ariana DeBose belts strongly in “Webster Avenue.” Slater’s lyrics are true to the late 1950s-early 1960s, with references to “copping a feel” and to Frankie Valli.

A 19-person band, including violins and celli, is expertly led by Jonathan Smith. Listening to three Menken shows in proximity, I realize a unique aspect of his work. For better or worse, Menken does not have a quickly-recognizable signature sound. He adapts to the material at hand and uses separate styles for Disney, political satire, Montreal Jews, and Bronx Italian-Americans. 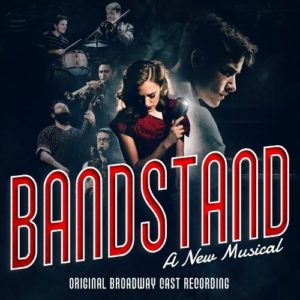 This musical is also set in an earlier time – the late 1940s, as veterans return from the war and try to resume their careers as musicians. It has current relevance because it shows a group of men coping with what we now know as post-traumatic stress. The leading character wonders why he came home alive while his best friend was killed before his eyes.

Six guys form a band and try to succeed in show business with what they describe as a “new, progressive sound.” They hire a girl singer named Julia, and that provides romance and additional tension because she happens to be the widow of that friend who died in battle.

Bandstand’s music & lyrics are written by Richard Oberacker and Robert Taylor. They capture the tone of the swing era in its mature years. My only regret is that their musical arrangements do not convey the notably progressive bands of that era, such as Dizzy Gillespie or Boyd Raeburn or Stan Kenton. Instead, they’re mainstream big band; catchy and accessible, but not as revolutionary as what the guys profess. The music does provide great impetus for dancing, which was choreographed by Andy Blankenbuehler (of Hamilton fame) who directed the entire production.

Corey Cott (Newsies, Gigi) is the charismatic band leader. His voice is terrific in “Welcome Home” and several other songs. (Sidelight: A different song with that same name is also in The Apprenticeship of Duddy Kravitz and another was in the old musical by Harold Rome, Fanny, where it was sung by Ezio Pinza.) Laura Osnes (Bonnie & Clyde, Cinderella) sings appealingly as Julia, especially in the ballad “Love Will Come and Find Me Again,” and Beth Leavel (The Drowsy Chaperone) is solid as her down-to-earth mother. Cott and Osnes blend together nicely on “This Is Life.”

An unusual aspect of Bandstand is the fact that all of the men portraying band members are convincing singers and exceptional instrumentalists: Cott plays the piano, Brandon J. Ellis the bass, James Nathan Hopkins the sax, Geoff Packard the trombone, Joe Carroll the drums and Joey Pero the trumpet. Greg Anthony Rassen is the music supervisor and arranger, while Fred Lassen conducts.