Reality TV shows have been described with many different words since they have pervaded the airwaves over the past two decades – crass, stereotypical, unreality. Maryland-based playwright Daniel Johnston, a fan of reality television, wrote and staged a play last year at Howard Community College (HCC), entitled House. that closely examines the exploitation of stereotypes on those shows. With outstanding direction by Susan Brall (a reviewer for this publication), Laurel Mill Playhouse’s premier of House. is an entertaining, cognitive challenge that commands audience attention from opening to closing curtain.

The challenge for audiences of House. is to keep up with the myriad machinations of ten contestants fighting over one million dollars and the title of “Leader of the House” on the show within a show. The show floods the audience with an abundance of information; the audience knows which TV show alliances are real and which are fake – the characters don’t. Throw in a clue hidden in an envelope, an Agatha Christie reference, and a dash of audience participation, and House. all comes down to who voted against whom.

Joelle Denise, as restaurant-owner Andrea, brought the energy of the streets to the show within the show. Denise showed elements of the stereotypical “Angry Black Woman” in her role. Denise, in her LMP debut, was resplendent in all her scenes.

I loved the Southern accent and charm of the adorable Shenochia Jordan, who played the annoying aspiring model, and boy-crazy, Lucy Gray. Jordan was seen last fall at LMP in To Kill A Mockingbird.

William Mekelburg brought a “why am I here?” innocence to his role as Liston. Mekelburg holds an Associate’s Degree in theater arts from HCC. Diego Esmolo, as Carlos, had an effective chemistry with Denise’s Andrea. Carlos and Andrea had a “showmance” throughout the show, with Andrea constantly going to bat for her man.

Dr. Reginald Garcon (who played Reverend Sykes in LMP’s recent To Kill a Mockingbird) and Melita Bell were humorous as Onyx and Pearl, the formal-wearing hosts of the reality show. Garson’s mocking facial expressions had a lot to say about the reality show’s shenanigans and moral ambiguity.

The excellent Kike Ayodeji brought a good ditzyness to her role as Christine. Caleb Uzcategui played the proper bewilderment of family-man-on-a-reality-show Michael. Chris Sisson made his character Peter an irritating nerd. Darwina Metayer was strong as the put-upon Fatima. Jen Sizer brought goofiness to her role as Mickey.

Brall kept up a good pace with her direction, and the play moved along briskly – the first five TV days were covered in 20 minutes. I liked the way replays of earlier scenes in the TV show were staged, i.e. an actor would say their lines from earlier in the show and another actor would mouth the lines and act out the physical movement and stage business.

As Costume Stylist for his show, playwright Johnston adorned his players with everyday-people costumes. Mickey’s yellow hat stood out. I liked Aron Brall’s set design, which included pictures of Kim Kardashian and Ryan Seacrest on the wall and basic, functional furniture.

House. was dedicated to the founder of this publication, the late Joel Markowitz. Brall wrote in her Director’s Note and Dedication: “I would not be directing this play if it were not for Joel, and you would not be sitting here watching it. Therefore, it is most fitting that we dedicate this production of House. not just to Joel but to his life’s work to encourage local theater and local artists. This is just one of the imprints he left on us all.”

House. is a substantive evening of engaging theater that satirizes reality TV. It’s far better than an evening spent at home watching the unreality of reality television. 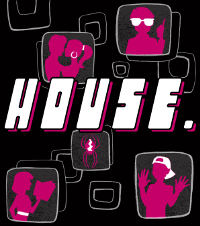