No Word In Guyanese For Me challenges our social conditioning around gender norms, identity, immigration, religion, and sexuality. Rainbow Theatre Project remounts this award-winning play by Wendy Graf in a sober and disarming way that leaves the audience wrestling with our own beliefs and experiences. The protagonist, Hanna, finds herself at odds with not merely one but all of them, and it is through her struggle to reconcile her relationship to these things that a truly human, universally relatable story of resilience unfolds.

Ashley K. Nicholas brings Hanna’s story to life in a riveting solo performance directed by Julia M. Hurley. The opening scene is quiet, dark and mysterious – a hint to the audience that this is a play that will gradually unfold. Hurley skillfully infuses several quiet moments throughout the story. They come at key turning points in Hanna’s life to either elevate the emotional stakes of a scene or give the audience time to process the trauma she endures.

Another fascinating element to the play is that Hanna’s journey spans the course of 18 years, through a non-linear timeline. We catch glimpses of Hanna’s life from ages 6 to 24 and the frequent use of flashback scenes puts Nicholas’ acting range on full display. These flashbacks are typically of Hanna’s childhood and serve to remind the audience of how much she’s changed, the innocence she’s lost and the extent to which her spirit has been smothered by the restraints placed upon her.

Nicolas draws from her own Caribbean roots to bring authenticity to the role. This is subtly captured through the evolution of Hanna’s accent, better yet her voice. As a child growing up in her native country of Guyana, a place she lovingly refers to as “my land of many waters” Hanna has a thick accent that is frequently punctuated with outbursts of giddy laughter and playful exuberance. While preparing for her family’s move to NYC we see the first set of constraints placed upon her by her family. Her aunt/surrogate mother forces her to practice Americanizing her accent and explains the importance of assimilating to U.S. culture. During her adolescent years in Queens, NY Hanna’s accent is milder but still noticeable, as she matures it continues to fade and with it her child-like innocence and freedom.  Kudos to Nicholas for making this choice and for infusing it with such strong symbolism.

The central conflict of the story is between Hanna’s sexuality and her religion, thus her hijab, a head covering worn in public by some Muslim women, is a key character in the story. There is a point in the play where she’s forced to make a choice about how to move forward in her life. In making that choice she removes her hijab and its one of the most painful, yet courageous scenes to watch. In that moment the sacrifice she makes is bigger than religion, it’s bigger than family, it’s a choice to be loyal to herself and accept herself despite the rejection of the people she loves.

The historical backdrop of Hanna’s story is of pre and post 9/11 NYC, which adds another layer to her struggle for acceptance and belonging. Through this lens we see her family grapple with the new reality of what it means to be Muslim in America. The intense scrutiny and hate towards Muslims during that time is made evident in the play through how her father is treated. The pride he once had for his job as a taxi driver shifts to one of fear, part of his dignity is stripped from him and it’s a crushing blow to Hanna’s family. Not long after this Hanna is forced into tumultuous arranged marriage. Rather than be allowed to attend college to study her passion of photography, a new life, that of wife, is thrust upon her. Her unwillingness to consummate the marriage forces her to confront her sexuality. She cannot run from it and she can’t pretend that she’s attracted to her husband, no matter the consequences. These moments are among the most riveting to watch because Nicholas makes us feel every bit of Hanna’s pain, longing and fear.

The set design (by Nola Werlinich), lighting (by E-hui Woo), sound (by Cresent Haynes) and visual projections (by Brian Douglas) blended together seamlessly to punctuate each stage in Hanna’s journey and create a distinct atmosphere that juxtaposed the bustling, concrete jungle of New York City with the warmth of Hanna’s beloved Guyana.

Overall, No Word in Guyanese For Me is a thought-provoking work of art, poetically written and beautifully performed.

Run Time: 90 minutes, with no intermission. 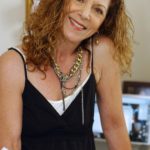 Recent award-winning short plays: SOPHIE/ALEXANDER/LISBOA; ASHES TO ASHES; A HOLLYWOOD FABLE; LESTER AND SCHLOSS; REPORTS OF MY DEATH HAVE BEEN GREATLY EXAGGERATED; A SHONDA; RED AND BLUE.