In turbulent times, escaping into a yarn that is as light and high-flying as a helium-filled balloon can be a welcome respite. So, the Great Performance Series at the Center for the Arts/George Mason University welcomed the touring company of Philadelphia’s Walnut Street Theatre for a single performance of DC area playwright Ken Ludwig’s affectionate comic take on master detective Sherlock Holmes.

Ludwig took a very broad leap from Arthur Conon Doyle’s 1902 The Hound of the Baskervilles. He turned it into a new-fangled, snappy comedy entitled Ken Ludwig’s Baskerville: A Sherlock Holmes Mystery. No worries. No need to recall all the “ins-and-outs” of the original Conon Doyle source material was needed to enjoy the Walnut Theatre production. All that was needed was a desire to be humored with a willingness to let go of inhibitions to laugh, chuckle or merely chortle or snicker. And, at times, roll one’s eyes as purposeful groaners of humor make their way from the stage into the audience.

As Holmes begins his search for clues, he and Watson meet with dozens of randy folk in locations such as crowded railway stations, foggy London streets, forbidding English moors and one gloomy mansion. There are clues galore, plenty of dead ends and a sizable puzzle to solve to ferret out the truth. But know it is all in good fun – no scare-fest at all.

There are five winning performers who made this particular Sherlock Holmes’ production likable. Holmes himself is portrayed by Ian Merrill Peakes as a sly, authoritative, clean-cut, no-nonsense type. The quirks I remembered about Holmes from previous plays, movies, and books are no-where in sight. By the way, Ian Merrill Peakes is a regular in DC acting circles. In fact, he is a Helen Hayes Award recipient for his work as Outstanding Supporting Actor for playing The Player in the Folger Theatre’s 2015 production of Rosencrantz and Guildenstern Are Dead.

Bill Van Horn plays Sherlock’s intrepid side-kick, Dr. Watson. Van Horns portrays Watson as a refined, straight-arrow; a civilized character who wants to be part of the action even if sometimes he becomes the butt of a Holmes prank. Van Horn also directed the production.

What gives the production its comic lift and bouncy pizzazz is a gaggle of three actors who play about three dozen roles between them. They are full of energy and stamina with no fear of strange accents, pratfalls, silly walks, acting “strange,” abundant facial hair, and purposeful bad timing. They are delectably in synch with each of the many different characters they portray. The three are Dan Hodge (who plays a rich array of unstable characters including one named Stapleton who collects butterflies), Jered McLenigan (as straight-shooter Henry Baskerville) and the splendid Sarah Glicko (a totally Mel Brooks type character as an heavily accented Mrs. Barrymore, as well Stapleton’s sister, or so she claims).

Doing a touring road show and packing up after a single performance to drive to the next town has to be stressful. For this Walnut Street Theatre spring tour, from February to every early March, the roadshow visited eight states and had 14 performances including one in Bermuda. To make each stop doable, there is a spare simple box set designed by Scott Groh. For the many costume changes required the value of Velcro is evident for quick changes with the creative work of costume designer Kayla Speedy. Her costume designs give each of the many characters a real self to show the audience. There is silly aural spookiness for the production fitting life on the English moors created by sound designer John Kolbinski. And general kudos to Ryan George, tour technical manager, and Kelly J. Schwartz, the tour stage manager. Their job to get things up-and-running for each performance in a new town and a new stage must be exhausting.

Ken Ludwig’s Baskerville, A Sherlock Holmes Mystery is a bright, shiny, comic entertainment with talented actors out to give the audience a nearly good time. At the Center for the Arts performance I attended, its 2,000 seats were nearly full. The audience was having a good time as Ludwig’s spoof laden script raced before them until the mystery was solved. The outside world, with all its stresses, had been held at bay, at least for a few hours. 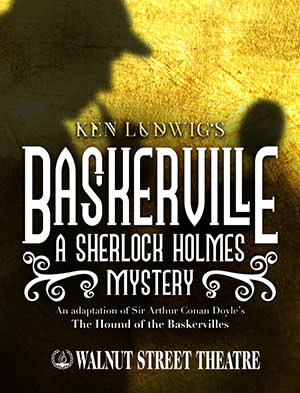 Note: There was a Center for the Arts pre-performance discussion led by George Mason University English professor and mystery writer Art Taylor and Peter E. Blau of the DC area’s Red Circle along with three cast members of Baskerville; Ian Merrill Peakes, Bill Van Horn, and Dan Hodge. I was most taken with the discussion that Sherlock can be reinvented while staying connected to the Conon Doyle original. How any of us see Holmes depends on the times, and our own cultural values was a big takeaway from that discussion. More specifically, we each have our own Sherlock touch-stones, whether Basil Rathbone or Jeremy Brent or Robert Downey Jr. or Benedict Cumberbatch or whomever as “the” embodiment of Sherlock Holmes. 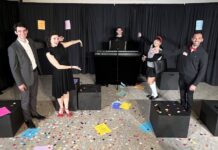 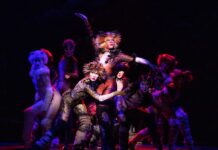