A new twist on the old adage attributed to former Philadelphia Police Chief and Mayor Frank Rizzo, “A liberal is a conservative who hasn’t been mugged yet,” Lincoln Center Theater’s production of Joshua Harmon’s new play Admissions, at the Mitzi E. Newhouse Theater, presents a provocative exposé on the hypocrisy of believing in progressive ideals and political correctness when it comes at no personal cost. Directed by Daniel Aukin, the play combines humor, heated debate, and insight, while offering a range of shifting white perspectives on the hot-button issues of affirmative action, white privilege, and reverse discrimination, equality versus equity, and individual self-sacrifice in the quest for the greater good, in the context of affecting change in the ivory tower of our elitist educational system.

In the midst of her successful initiative to increase minority enrollment at the exclusive prep school for which she serves as Head of Admissions, Sherri Rosen-Mason, her husband Bill (the Headmaster), and their son Charlie (a senior at the school and a Yale University applicant) face ethical dilemmas and uncomfortable truths about themselves, when they are impacted by the liberal principles and demographic percentages they’ve promoted, and the stakes have shifted from statistical to personal. Harmony among family, friends, classmates, and colleagues is threatened, as they erupt with unexpected admissions of their own suppressed feelings, perceptions, and attitudes.

The scenes, facilitated by Riccardo Hernandez’s smart stationary set design, cleverly move back and forth from Sherri’s office to her home, to show the growing contrast between the public policy she enforces and the private expectations and ambition she holds for Charlie, between her idealistic beliefs and the painful reality of his thwarted dreams of acceptance at Yale. Played by Jessica Hecht with soft-spoken (sometimes a bit girlish) authority, we feel the increasing conflict in her own mind, after having shown little consideration or concern for those she rejected in her institution’s drive for diversity or those who were bypassed when she and her husband were chosen over others for their own high-ranking positions. Though she espouses opportunity for under-represented minorities, she is the self-serving model of everything she decries, celebrating her professional success and taking advantage of the connections she has to correct the perceived wrongs to her son. Andrew Garman’s smugly smiling Bill is, like his wife, a paradigm of white liberalism, but a thoroughly unsympathetic father, ferociously critical of Charlie, insensitive to his disappointment, and seemingly unaware that he, too, epitomizes the entitlement and privilege of which he accuses his son.

Ben Edelman as Charlie provokes both laughter and thought with his impassioned harangues of racially-charged questions and opinions of the type that are usually left unsaid. His flawless rapid-fire delivery successfully conveys his character’s adolescent devastation, anger, embarrassment, and confusion at being denied the goals for which he has worked so diligently, in favor of the mixed-race and female classmates he perceives as less deserving. His transition from entitlement to self-reflection and his misguided attempts to do the right thing by jeopardizing his own future are convincingly filled with the ardor and rebellion of youth.

Rounding out the cast are Sally Murphy as Ginnie Peters, whose unsophisticated demeanor becomes more serious as she addresses the reasons for the faltering friendship between her son and Charlie, herself and Sherri; and the terrific Ann McDonough as Roberta, who is at first frustrated by Sherri’s criticism of her work on the school catalogue and perplexed by her fixation with race, before she, too, experiences a change in attitude.

Harmon’s script requires some suspension of disbelief, especially in the initial reactions and inaction of the high-achieving academic parents to their son’s distressing news. And a heavy-handed scene of Charlie’s slow-paced trudge up the staircase and his mother’s frozen position in the spotlight is unnecessary and obvious in its symbolism, after such eloquent verbal expressions of their shifting attitudes and states of illumination. But there are also adroit references to recent events ripped from the headlines, which underscore the current relevance of the theme. It is no coincidence that the playwright chose the highly-selective Middlebury College as the Masons’ top alternative to Yale. Last March, when the fictional protagonist would have been a freshman (the story is set in the 2015-16 academic year), student protests turned violent and prevented conservative political scientist Charles Murray from presenting his scheduled campus lecture on The Bell Curve – the contentious 1994 book he co-authored with the late psychologist Richard Herrnstein, which posits a controversial connection between race and intelligence.

Admissions offers no easy answers, but it does open up the conversation, raising important questions about what is fair, who decides, and what kind of person you want to be in our society’s pursuit of equal opportunity in education, professional development, and life. By giving voice to all sides of the all-white discussion, as laughable or disturbing as they might be, Harmon makes it clear that it’s not all black and white; there are a lot of grey areas. 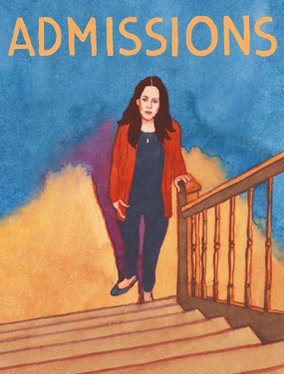