Nanna Ingvarsson is so phenomenal in these three harrowing short plays by Samuel Beckett that one can easily imagine the Nobel Prize-winning minimalist—notoriously persnickety about his stage directions—rising from the grave (center stage, a six-by-two rectangular hole, in nearly no light) and exclaiming (in a hoarse whisper): “Yes, yes, that’s precisely what I meant.” And then (brushing dust from his cadaverous face): “If only I were still alive, I could write another playlet for her.” (Whereupon, woebegone, he slowly disappears into the hole. Ten-second pause. Fade to black.)

Two-time Helen Hayes Award winner Ingvarsson has secured a reputation as one of the best actors in town, but were she still casting about for a calling in life, deciphering the distilled texts of Beckett would be a mission with her name on it.

Robert McNamara is the Artistic Director of Scena, a company that for thirty years has been acting locally the intriguing literature he has sought out globally. Beckett’s Endgame was Scena’s first production, and now McNamara directs an enthralling hour’s worth of three spare plays, all of which touch on Beckett’s fascination/obsession with end-of-life stasis in the face of mortality.  Beckett may be the poet laureate of our inevitable decrepitude, and to some, this cryptic triptych might seem a grim night out, but do not underestimate Becket’s prosody, which has influenced more subsequent playwrights than you can shake a spear at. Not to mention: Ingvarsson’s musical mastery of Becket’s language is sublime.

The first playlet is Footfalls, in which a woman named May (Ingvarsson) paces back and forth on a walkway of planks clip-clop-clip-clop and has a fractured conversation with the Voice of her mother (a marvelous prerecorded Nancy Robinette). May is said to be fortyish but Costume Designer Sigrid Johannesdottir has followed Beckett’s instruction to the letter, as one must (“disheveled gray hair, gray wrap hiding feet”), making May seem like the ninety her offstage mother is said to be.

Next up is Not I, in which Ingvarsson plays Mouth, who is just that: a brightly lit red-lipped mouth appearing in darkness through a hole eight feet above the stage, per Beckett. And Mouth runs off at the mouth with a torrent of phrases and ellipses and little syntactical connection. It begins:

Mouth’s monologue goes on like that for nearly eight pages, and I could not help wondering during this epic logorrhea, How in the world did Ingvarsson learn it? And how in the world did she then make it so piteous and hilarious at the same time?

The closer is Rockaby. Ingvarsson as Woman sits in a rocking chair mechanically operated from offstage so it rocks and stops, rocks and stops. Again it’s a monologue in a female voice, this time in blank verse, an end-of-life reverie with this poignant refrain

And again Beckett’s stage directions have been executed exactly:

For a gripping take on a master of modern drama, wait not. Go do’t. (That’s a stage direction.) 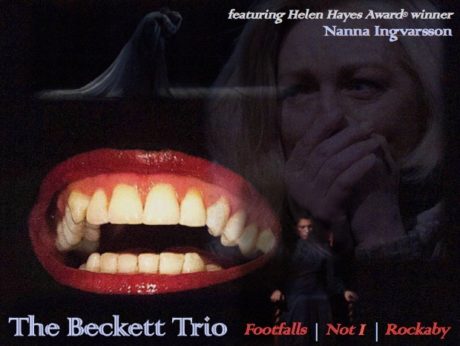