When the ceremony ends and the last guest makes his or her way out of the Anthem on Monday night, many members of DC’s theater community will go home happy, clutching the trophy that proves they are a Helen Hayes Award recipient. Based on numbers alone, chances are that some of those people will be affiliated with the two productions of In the Heights, Lin-Manuel Miranda’s heartwarming musical of self-discovery, staged in DC in 2017.

GALA Hispanic Theatre, the first theater in the United States to stage a Spanish-language version of In the Heights, earned 18 nominations for their production. The joint Olney Theatre Centre & Round House Theatre production earned nine.

And both are now nominated for the same Helen Hayes Awards for choreographing and directing the same show… in the same city… in the same year.

Intrigued by these parallels, I wanted to learn more about the men behind two of DC’s most successful 2017 productions. The three of us shared a fun-filled phone conversation earlier this week and it turns out that these hermanos, as they fondly refer to each other, share many professional experiences as well as a deep sense of pride in their heritage and their ability to represent Latino culture on the national stage.

Even as young artists in Puerto Rico, their stories overlapped. “Puerto Rico is a small island with an even smaller performing arts community,” Santana told me, “so we all kind of know each other.

Santana, a native of Bayamón, who describes himself as “about a generation older than” Salgado, left the island first. He made his way first to LA as a dancer (an impressive feat on its own because Santana did not start studying dance until he was 18.) and then to New York.

He made regular trips back home to share what he was learning. Salgado, who grew up in the town of Vega Alta, remembers attending seminars that Santana would offer. “Artists like Marcos who would travel and come back home to share their artistic experiences had a huge effect on the rest of us. This was really influential in leading me and many others to come here.”

But it wasn’t until years later, after Salgado had moved to New York City in 2002, that the men first worked together professionally. “I was running the New York auditions for Sergio Trujillo’s Mambo Kings. I looked down at the audition list and there was his name, Marcos Santana! It was a surreal experience because I had fallen into this position and some of the biggest names in Latin American performing arts were coming in to audition.”

Both men have remained close to their roots despite leaving the island. When Hurricane Maria hit Puerto Rico in September 2017, Santana and Salgado were once again working together, this time in Holland on the Dutch production of On Your Feet! (Santana was associate choreographer, Salgado associate director). “It was devastating. We were on our phones looking at these pictures of home with no idea what to do” Salgado said.

But each man found a way to be proactive in the face of tragedy.

Salgado’s R.Evolución Latina organization, which he founded in 2008 to empower the Latino community through the arts, raised money and partnered with Luis Miranda (father to a certain Lin-Manuel), to collect and deliver supplies to the island. Salgado and his team visited Puerto Rico in November “literally going door to door with bottles of water and other supplies,” and returned in December with a shipment of toys collected by Lin-Manuel Miranda in partnership with Toys-R-Us.

Santana, who had a job scheduled in Orlando shortly after the hurricane, sent supplies and flew his parents to Florida to escape the worst period of rebuilding. While directing In the Heights at Olney Theatre Center, he was part of the production that raised  $113,619.55 for the Hispanic Federation, the American Red Cross, and the Caribbean Disaster Emergency Management Agency (CDEMA).

It is partly because of their roots that both men were so eager to be involved with new productions of In the Heights.

“Even though it was written in 2005, In the Heights is so relevant to the political climate right now,” Santana said. “It’s a show that allows Latinos to tell our own stories about our own struggles. We are very blessed and lucky that a show like that exists for us.”

Luis agrees. “I left the show I was doing on Broadway [On Your Feet!] because I felt so strongly about doing In the Heights in Washington, DC at this point in time. We all left things behind to be able to be on that stage and celebrate our language and heritage and I think that is what you see in the results.”

Santana became involved with Olney/Round House’s In the Heights after working as associate choreographer on Olney’s 2016 production of Carmen. Associate Artistic Director Christopher Youstra approached him. “What do you think of In the Heights?” he asked. The worry was how receptive Olney’s audience would be to the show.

“I mean, that was the worry when they took it to Broadway,” Santana recalls telling him, “and look what happened there. But if you’re gonna do it, just make sure that you assemble an A-team that can do justice to the material.”

A few months later, he got the offer.

Salgado had a similar experience with GALA. “GALA and I had been flirting with each other for years, looking for the right time to work together. Then Hugo [Hugo Medrano, GALA Artistic Director] came to me and said ‘What if we do the first US production of In the Heights in Spanish? And I said ‘Hell Yes!’”

But mounting a Spanish language version of the show came with its own set of challenges. After much research, the team found in the Dominican Republic what they think is the only Spanish-language version of the show authorized by Lin-Manuel Miranda. Unsure if that version would work for a Washington, DC audience, they got to work on modifications.

“The result was a hybrid of English and Spanish but inverted from how we did it on Broadway,” Salgado explained. “On Broadway, we had 80% English and 20% Spanish. Here we flipped it around. This formula worked really well because then that 20% of English was coming from Benny [the show’s only non-Latino character, played by Vaughn Ryan Midder]. It gave Benny a huge source of conflict because he was the only actor and the only character who spoke only English.”

I asked Santana and Salgado whether having been involved with the original production was a blessing or a curse when it came to staging their own version. Both agreed: It brought its share of complications.

“When I sat down with my assistant in pre-production, I was like, how do I detach this from what is already in my mind and body….? You have all these ideas and your body remembers things in certain ways. You have to forget that.” Marcos said.

“It took me a few days to break through that and then I realized, ok, I know this show. Someone else wrote it and I’ve performed it before, but in the end, this is my story. It’s the story of my people and my heritage and the story of me being an artist in New York City and leaving everything behind to try to make this my new home. Once I started thinking that way, I found the vocabulary and style to tell the story as my story.”

Luis felt the same initial conflict. “I called Andy Blankenbuehler [choreographer on Broadway’s In the Heights] for advice every day when I started In the Heights at Gala!” he laughed.

But he concluded that being a part of that initial Broadway experience of In the Heights was “a curse in the most beautiful way. Once you experience that level of accomplishment and celebration of community, you want every experience to be just as powerful. In the Heights is a sort of North Star and Marcos and I were both inspired by it to take that experience of unity and pride and family and share it with these casts.” 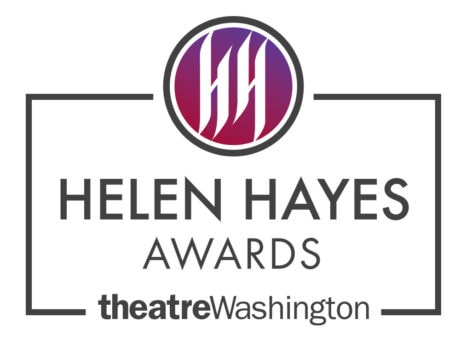 The 2018 Helen Hayes Awards, presented by theatreWashington, will take place on Monday, May 14th, 2018 at The Anthem – 901 Wharf Street, SW, in Washington, DC. Doors open at 5:30 for mingling and fun. The ceremony will run from 7:30 to 10:30 followed by a rollicking party open to all ticket-holders. For tickets, go online.

LINKS:
Hosting the 2018 Helen Hayes Awards: Michael J. Bobbitt and Alyssa Wilmoth Keegan Talk About their Lives On and Off the Stage as They Prepare for DC Theater’s Big Night Out by Ravelle Brickman

Review: ‘In the Heights’ at Olney Theatre Center (in a co-production with Round House Theatre) by Lisa Traiger

Review: ‘In the Heights’ at GALA Hispanic Theatre by Nicole Hertvik

Who’s in Town? Luis Salgado: Director and Choreographer of GALA Hispanic Theatre’s ‘In the Heights’ by Nicole Hertvik