For a long Labor Day Weekend, September Song is presenting Cole Porter’s Anything Goes at the Carroll Arts Center in Westminster, Maryland. Produced by Allen Cross and Joan Eichhorn and directed by Laura-Beth Wonsala. Anything Goes is Cole Porter at his best. The musical has many of his show-stopping numbers. The plot itself is silly, very typical of the 1930’s when it was first produced. However, the book was originated by Guy Bolton and P. G. Wodehouse and heavily revised by famous comedy playwrights, Howard Lindsay and Russell Crouse. It was later revived in the 1980’s and again revised by Timothy Crouse-Lindsay’s son- and John Weidman. 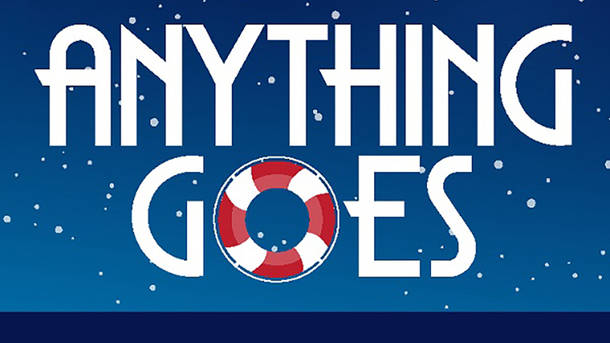 This esteemed group helps the plot flow and there is a great deal of humor to keep you from noticing the plot contrivances. Most of the action takes place aboard a luxury cruise liner, and the cast and crew of this ship are First Class.

Abigail Weinel as Reno Sweeney gives a knock out performance. This role has given actresses many awards and Weinel is definitely up to the task. It is her voice that belts out most the standards, like “I Get a Kick Out of You” and her dancing to “Anything Goes” at the end of Act I is top notch.

Nick Cloutier is Billy Crocker. Crocker is not the typical lovestruck fool. He is resourceful and unrelenting in trying to win over his love Hope Harcourt, beautifully played by Alyson Marks. I enjoyed their duet of the ballad. “All Through the Night” and of course.” Easy to Love.”

Adam Yastrzemsky and Casey Golden play the mobster Moonface Martin and the moll, Erma, respectively. Yastrzemsky is hilarious as the gangster disguised as a priest and Golden’s Erma is a hoot. Yastrzemsky gives special prison cell advise in the funny “Be Like a Bluebird” and Golden shines in “Buddie, Beware.”

Ethan Brown adds to the mayhem as the British Lord Evelyn Oakleigh with another excellent performance. Evangeline Harcourt is portrayed by Claire Green who keeps this character from being too ridiculous and still keeps us laughing. Michael Livingston is another highlight as the businessman and drunk, Elisha Whitney.

This is a very large cast. They are all very talented performers including two very cute dogs. I am impressed that there are these many fine singers and dancers who can fill out an amateur production with powerful voices and more than capable dancing. These fine supporting cast members include Cade MacFee as Luke, Jimmy Case as John, Dennis Skinner as Captain, Will Brown as Purser and Fred, Allen Cross as Henry T. Dobson, Patty Brunker as Lady in a Wheelchair, Jennifer Kellogg as Purity, Jessica Long as Chastity, Amanda Polanowski as Charity, and Justin Patterson as Virtue. The Dancers include Katy Cooper, Abigail Culkin, Joan Firestein, Danielle Rizzo, Anika Rudolph and Sophia Smithson. Jacob Dawson and Payton Stoneberger join MacFee, Case and Cross as the Sailors. The Ensemble is filled by Carolyn (Abby) Upshaw, Laura Danko, Rachel Jancarek, Magnolia Flynn-Lebischak, Carly Victor, Alicia Poling, Lilian Stoneberger, Madison Sadler and Heather Skinner.

Wonsala’s direction if fresh and interesting, keeping the large cast afloat. The choreography by Amy Appleby with assistance from Jessica Long uses the varying degrees of experience within the cast to make some great dance moments, especially the tap dance to “Anything Goes” and the on-board church revival “Blow Gabriel Blow.” Diane Jones musical direction uses the wonderful voices to blend into memorable moments, and you never lose a word of the wonderful but complicated Porter lyrics.

The Set Design and Construction is credited to Jim Stoneberger. The set is imaginary and beautifully constructed as flats move out to create staterooms, a prison cell, the large ornate dining room and even a gangplank. The costumes by Barb Szaro are outstanding. They are bright, in a period and actually fit the actors. Many of the performers, including the ensemble, have several changes. They are on a par with any professional production. The Lighting Design by Lindsay Sier complements the set, actors, and costumes seamlessly.

If the production has a flaw, it was a small one. During the solo by Alyson Marks as Hope, the crew was moving set. I realize they were trying to keep up the pace as this a long musical, but it upstaged Marks’ performance. I also would have liked the lights to remain at least at half during the overtures before the acts since the music is recorded. However, that is my own personal preference.

Get up to Westminster this weekend to the Carroll Arts Center to see Anything Goes. To quote the song, “It’s delightful, it’s delicious, it’s de-lovely.” It will be “Easy to Love” this production.

The saddest part is Anything Goes plays only through September 3rd at the Carroll Arts Center, 91 W. Main Street, Westminster, MD. For tickets go online.