For those of us who are fans of the Baroque period, it’s no secret that the Counter Reformation served as one of the most fertile periods in European art history. With the advent of opera and the virtuoso style, woven throughout the era’s most brilliant musical compositions, Baroque music represent some of the most creative- and ostentatious- compositions found in Western Civilization. The National Chamber Ensemble delivered a magnificent program showcasing some of the highlights in Masters of the Italian Baroque. 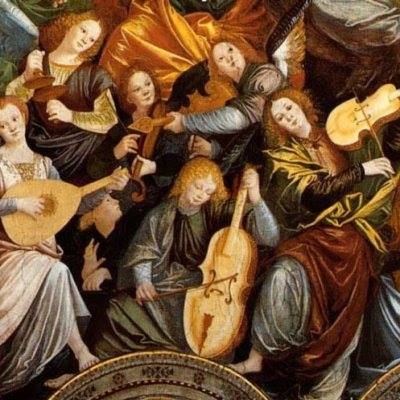 The concert began with Antonio Vivaldi’s “Concerto for Two Violins.” Vivaldi, an asthmatic priest who was unable to fulfill his liturgical duties due to his poor health, is a staple of the baroque era for good reason. Violinist Jorge Orozco mentioned that this particular concerto was more popular in its day than “The Four Seasons.” (Another fun fact: Vivaldi was known as “The Red Priest” due to his hair color- proving that redheads can’t catch a break at any point in history.)

It was an absolute joy to see Orozco, joined by guest violinist Dietrich Paredes, follow the twists and turns of Vivaldi’s work. Orozco plays with a perfected surety that hits the ears with each triumphant note. Likewise, Paredes leans into the music, utilizing his entire upper body to tease out the perfect song.

Accompanied by Chris Shieh (viola), Christopher Chlumsky (double bass), Susanna Mendlow (cello), and Natasha Dukan (harpsichord); the Ensemble advanced to Albinoni’s “Sonata a Cinque in G Minor.” This is an interesting piece of music, which the Ensemble executed with aplomb, of course.

The third composition brought Vivaldi back into the program. “Concerto No.4 in F Minor,” popularly known as “Winter” from The Four Seasons, was accompanied by a multimedia presentation which- to my surprise- featured a sonnet written by Vivaldi to accompany the piece. An excerpt: “We feel the chill north winds coarse through the home despite the locked and bolted doors…this is winter, which nonetheless brings its own delights.” Vivaldi is no John Milton, but this trivia, introduced to the audience by Artistic Director Leo Sushansky and Guest Host (and Georgetown Professor) Gianni Cicali- who read the sonnet in his native Italian- was a welcome addition to the history of this rich composition.

Sushansky joined to conduct the last piece, Pergolesi’s “Stabat Mater,” despite his broken hand (which he claimed was the result of an unfortunate run-in with a harpsichord). The “Stabat Mater” is a 13th century Latin hymn, sometimes known as “Stabat mater dolorosa” or “The Mother Stands Sorrowful”, written about the experience of Mary at the foot of the cross during the crucifixion of Jesus. Pergolesi, whom the audience was told died at age 26, composed this version of the hymn while convalescing at a Franciscan Monastery while he suffered from tuberculosis during the last weeks of his life.

Pergolesi’s “Stabat Mater” is a resplendent composition and a treasure for those of us who enjoy religious music. Mezzo-soprano Anamer Castrello and soprano Sharon Christman provided the vocals for the piece. Castrello has a powerful voice that is sonorous and sensual, yet she shows restraint in portraying the sadness of a grieving mother. Christman’s soprano is crystal clear, rising above the sorrow to deliver notes of hope, and complements Castrello’s well.

Masters of the Italian Baroque by the National Chamber Ensemble played October 20, 2018, at Gunston Arts Center – 2700 S Lang Street, in Arlington, VA. Tickets to their upcoming shows can be purchased online.