Luminaries from a new generation of the Great White Way revisit classic songs from the hit shows (and a few notable flops!) of years gone by, in impresario Scott Siegel’s popular series Broadway by the Year at The Town Hall. This month’s one-night-only performance of Broadway by the Year: Broadway Musicals of 1965 & 1978, written, directed, and hosted by Siegel, featured a range of upbeat numbers, seductive flirtations, and heartfelt ballads that showcased the unique talents of its acclaimed cast, under the distinguished musical direction of Ross Patterson (who has been with the series, now in its 19th season, since its inception).

Siegel introduced Acts I and II in his signature style, with a recap of some of the most memorable events of the featured years, to set the stage for his riveting selection of shows and songs (when the older audience audibly responded and nodded to his list of highlights, Siegel amiably joked that they were showing their age). 1965, he recounted, was a tumultuous time that saw the first Selma March for civil rights, the first commitment of US ground troops to Vietnam, and the Great Northeast Blackout that plunged New York City and the entire east coast into darkness, as well as the Beatles’ phenomenal concert appearance at Shea Stadium and the blockbuster Broadway premiere of Man of La Mancha. He began Act II by recalling that 1978, along with the compassionate presidency of Jimmy Carter and the peace initiative of the Camp David Accords, was also a horrific time of serial killers and the Jonestown Massacre, and, ironically, the year in which the legendary Jacques Brel “was no longer alive and well” (he died that October 9th).

The ‘65 segment (in which several of the chosen songs shared a connection to Barbra Streisand, as noted by the informative host) opened with Spongebob Squarepants’ award winner Ethan Slater leading the company in an exuberant rendition of “A Wonderful Day Like Today” from The Roar of the Greasepaint – The Smell of the Crowd. Though the show only played 231 performances, Siegel explained, its score introduced such beloved standards as “Who Can I Turn To” (expressively crooned by Rick Faugno of the current Broadway revival of Kiss Me, Kate), “Feeling Good” (presented in a distinctive version by jazz stylist Nicole Henry), and “Nothing Can Stop Me Now” (with which resident choreographer Danny Gardner and the Broadway by the Year Dance Troupe closed the first act, ebulliently singing and dancing to the joyful beat).

In between, Slater returned with a rich and engaging delivery of the title song “On a Clear Day You Can See Forever” (the lyrics, according to Siegel, took Alan Jay Lerner a full eight months to write); Betsy Wolfe (known for her Broadway appearances in Waitress, The Mystery of Edwin Drood, and Falsettos, among others) brought her beautiful mellifluous voice to “A Quiet Thing” (from Flora, The Red Menace) and “Someone Woke Up” (from Do I Hear a Waltz?); and, in her BBTY debut, Lianne Marie Dobbs captured the Spanish flavor and turned up the heat with “It’s All the Same” (from Man of La Mancha, Broadway’s biggest hit of the year), backed by guitarist Jake Owen and the BBTY Dance Troupe. Other highlights of that year included stand-alone hits from the lesser-known musicals Drat! The Cat! (with Dobbs turning in an amusing performance and powerhouse vocal on “He Touched Me”); Pickwick (the irresistible Slater again charming the crowd with “If I Ruled the World”); The Yearling (which played only three performances on Broadway, but was represented by Henry’s down-tempo lament on “Why Did I Chose You?”); and Skyscraper (with Kiss Me, Kate triple threat Corbin Bleu playfully acting, dancing, and singing to “Everybody Has the Right To Be Wrong”).

Act 2 focused on the musicals of 1978, with a set list from Ain’t Misbehavin’ (featuring a provocative “Honeysuckle Rose” and “Mean To Me” by Henry and a glammed-up coquettish version of “Keepin’ Out of Mischief” by Dobbs); Best Little Whorehouse in Texas (Douglas Ladnier, of Jekyll & Hyde and Sweeney Todd fame, lending his deep resonant voice to “Hard Candy Christmas” and Wolfe giving an empathetic nod to “Doatsy Mae”); and Working (based on a book by Studs Turkel, and represented by Faugno’s smooth delivery of “The Mason”) – all accompanied, as in Act 1, in fine period style by Patterson on piano, Don Falzone on bass, and Eric Halvorson on drums.

Never winding down, the second act “brought it home” with a series of three showstoppers from Dancin’ and Timbuktu! (an extensively reworked revival of Kismet, which Siegel found to be so greatly reinvented as to include it among the shows that made their debuts in ’78). Ladnier’s powerful rendition of “Stranger in Paradise” from the latter was followed by two crowd-pleasers from the former: a high-energy dance routine to “Sing Sing Sing” by the sensational Bleu and Faugno (who provided the choreography of lively tap, slides, and splits) and “I Wanna Be a Dancin’ Man” by Gardner and the dance troupe (Lamont Brown, Bailey Callahan, Bryan Hunt, Brooke Lacy, Lily Lewis, Danny McHugh, Kelly Sheehan, and Michael J. Verre). All three numbers left the house effusively cheering and applauding. To close the show, Ladnier brought us back to 1965, with his impassioned performance of Man of La Mancha’s iconic “The Impossible Dream” – an inspirational note on which to end.

The 19th season of Broadway by the Year concludes on Monday, June 17, with a selection of numbers from, and anecdotes about, 1987 and 2015, so get your tickets now for the final leg of this entertaining and illuminating musical journey. 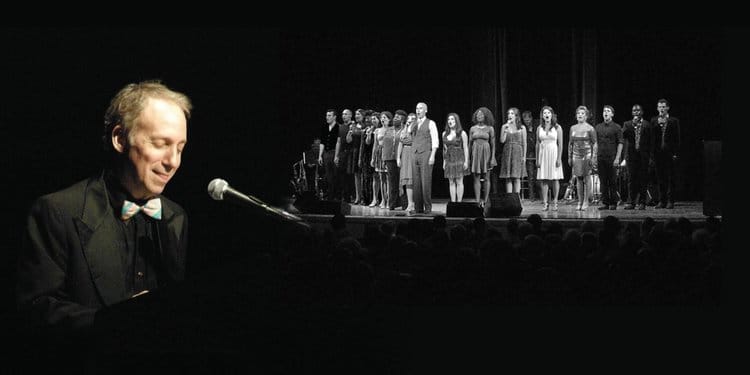