How does an actor prepare to embody of of the United States’ most famous first ladies? We spoke to Mara Bayewitz about her upcoming solo turn as Dolley Madison playing at Best Medicine Rep one weekend only June 12 through 14.

Nicole Hertvik: What is your favorite thing about Dolley Madison?

Mara Bayewitz: I love Dolley’s unapologetic adoration of her husband and her complete and total belief in his leadership and heart. She used her vivacious personality and love of throwing parties to help him get elected knowing that he was shy and uncomfortable in crowds. So many people try to change their partners into who they want them to be, and Dolley did the exact opposite. She loved and embraced him for who he was and mined those strengths to help make him president.

How much did you know about her before taking on this role?

I knew that she made good desserts! That was literally it. I am not a historian and said from the beginning that when the script was written it had to be written so that I could play her as a character and not re-create her life as if I was a curator at a museum. Thank goodness for the brilliant writing, because this character in this script is a tour de force role.

Is this the first time you are playing the role or were you involved in the 2014 production?

I created this role using an original script that was written with me in mind to play her. That is a very humbling statement, and I am grateful every single day that one of the writers, Stan Levin, cast me in the role three weeks before he asked me if I would do it. I overcame a lot of fear and threw myself into the project. I helped edit some parts as we went along and even added some of my own text at the end of the show. It was a living, breathing script from moment one and I cannot believe my good fortune in being asked to be involved.

The play is entitled “Presidentress.” That implies that she was one powerful lady. How did she manifest her power in her relationship with her husband and as the first lady?

She was actually named “the presidentress” by a newspaper right after the inauguration. She found that somewhat amusing. Her greatest power was her gift of gab and her ability to make connections with people in service of peace and harmony. There are scenes in the show in which I play Dolley and another character and those scenes clearly show how her charm and ability to connect could prevent a small problem from becoming a huge one. She could get blood from a stone.

What is your favorite Dolley Madison story?

I would say that it was the ending of her friendship with Aaron Burr. She was so greatly disappointed in him for killing Alexander Hamilton. We show that scene during the show. It’s poignant and heartbreaking. It’s actually one of the heavier moments in the show, which is mostly written lightly and with comic flair.

What all goes into turning you into Dolley Madison? The hair, the costume, the accent, what made the character click for you? 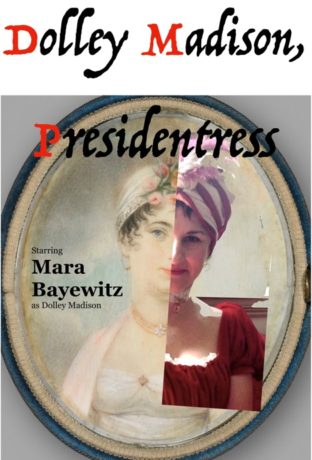 Other than putting on a corset which squeezes my organs in every direction but the middle, the turban with the signature feather in it is the most challenging piece because I can’t see what I’m doing, so I have to have someone else do it and there’s a very specific way that it has to be wrapped. The dress was handmade by costumer Jennifer Georgia, who made it to my specifications: I wanted a red velvet dress because I envisioned Dolley using the red velvet drapes from the White House to make this beautiful dress because she needed clothes that didn’t cost her much money. The accent was shockingly easy. I just imagined a sultry southern woman who loved to use language to flirt mercilessly. The accent really adds a lot to the character’s flavor and instantly gets my juices flowing.

Tell us about some of the other people involved in the show. Since it’s just you onstage, you must work very closely with director Karen Dugard?

Karen Dugard and I work very closely together and it is a very intimate project actually, because she serves as the de facto audience when I rehearse. I use the audience a lot in the show so she becomes the subject of every reference. Her reactions and notes can spark great ideas and new revelations. She’s a dream to work with. She also co-wrote the show from the historical perspective with Charity Goodman, and then Stan Levin turned that into a script with at least 7 characters and 11 scenes.

If Dolley Madison were alive today, what would be her ideal job?

She would be the diplomat who bridges the right and left wings of politics. She is probably the only person who could do it.