Men On Boats is American history as it needs to be retold: Without a white man in sight. Despite writing a historical play focused on the cisgender white men who comprised the Powell Geographic Expedition, playwright Jaclyn Backhaus cleverly requires that “the cast should be made up entirely of people who are not. I’m talking about racially diverse actors who are female-identifying, trans-identifying, genderfluid, and/or non-gender conforming.” Backhaus’s Men On Boats cleverly fuses unconventional casting with contemporary dialogue and slapstick comedy to discuss the dark, uncomfortable and often painful aspects of U.S. history. 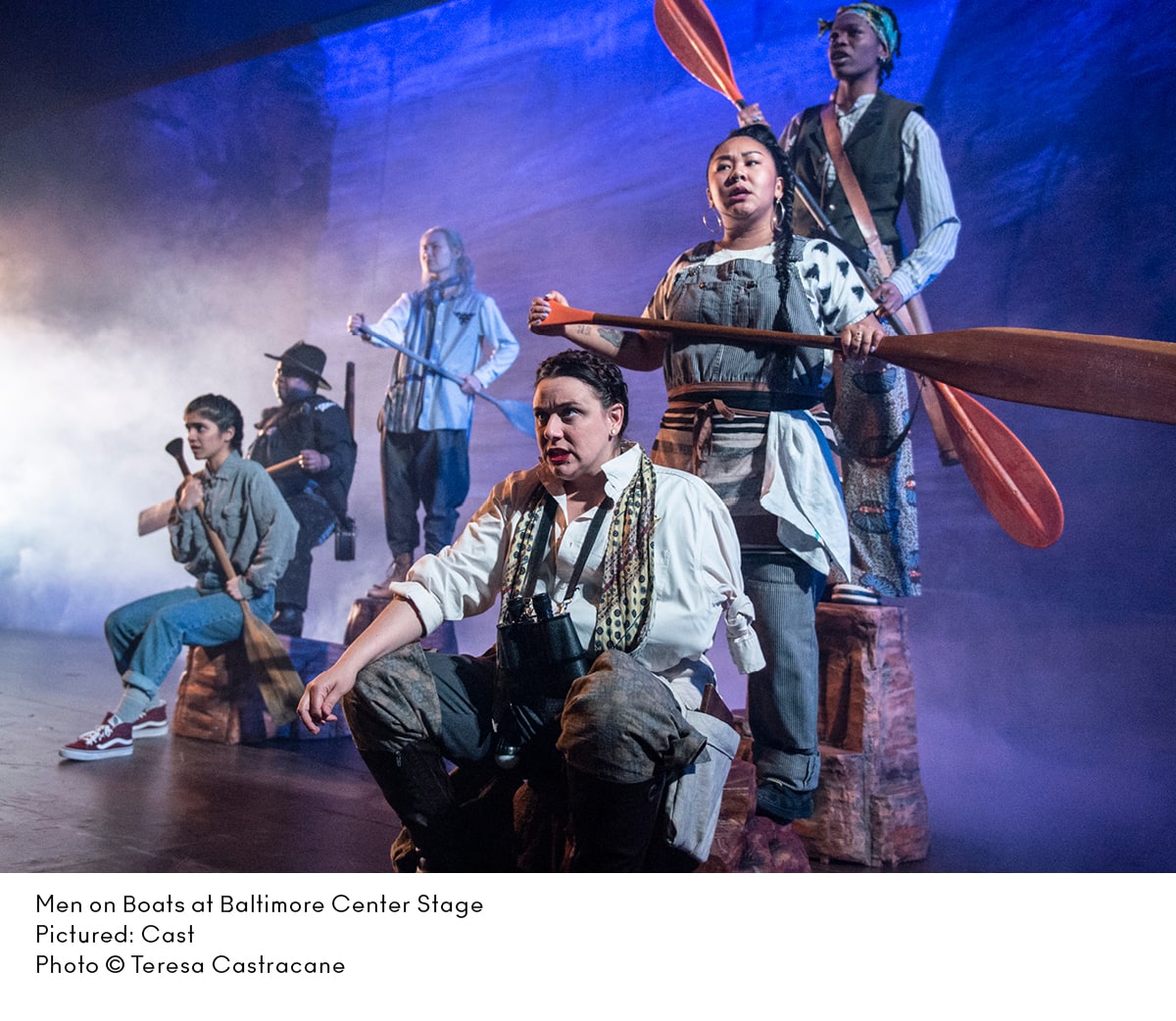 It’s a powerful choice to retell a tale focused on the crusades of white men with an all-female and non-binary cast of color. In the hands of such a cast, the portrayal of masculinity becomes less of a requirement in this historic account and more of a comedic strategy that points out the ludicrous arrogance with which Western colonizers conquered lands.

Set in 1869, Men On Boats sees Powell (Ceci Fernandez) aboard a boat named after his adored wife, the “Emma Dean”. Accompanying him are William Dunn (Jessica Ranville), a seasoned hunter and trapper determined to challenge every choice Powell makes throughout their journey together, and the more level-headed outdoorsman, John Colton Sumner (Patrena Murray).

There are three other boats as well. There’s the “Party Boat”… I mean the “Maid of the Canyon”, boarded by Hall, the team’s “map guy”, and Hawkins who’s in charge of provisions. Next, there’s the “No Name”, which is occupied by the incredibly British Frank Goodman (Natalie Woolams-Torres), and the occasionally unsettling Howland Brothers – Seneca and O.G. Howland (played by Eileen Rivera and Karen Lugo) – who go out of their way to make their privileged and slightly out-of-shape boat mate feel as uncomfortable and out-of-place as possible. Lastly, there’s the “Kitty Clyde’s Sister”, whose team consists of Powell’s stoic and strange brother “Old Shady” (Haruna Lee) and the young, eager eighteen-year-old Bradley (Elena Urdaneta), who will stop at nothing to forge a friendship with her sing-song partner.

Not a single moment is lost onstage thanks to the ingenious direction of Jenny Koons. It’s clear from the beginning that every laugh you experience during this one-act show is intentional. As I watched, I couldn’t help but think back on my childhood and the times I would excitedly play make-believe with my friends, donning hand-me-down costumes and turning household items into powerful tools as we pretended to be our favorite heroes, historic or otherwise. This production of Men On Boats emulates that childlike energy through its use of everyday props, such as spray bottles of water and very obviously rubber fish, that help the actors comically reenact the harrowing adventures of these boat “men”. It’s quite brilliant, actually, and it is this playful spirit that allows the audience to reflect more solemnly when the characters’ journeys inevitably come to an end and they are forced to reconcile with the fact that they are not the ones who ultimately get to tell their stories.

Natalie Woolams-Torres’s cartoonish portrayal of the British adventurer Frank Goodman is comedic gold. The character itself comments on sentiments we privileged folx often have when traveling to foreign nations, acting surprised when the natives can speak English well and leaving the expedition once the journey becomes too hard. Haruna Lee provides a more subtle performance with their take on the scratchy throated Old Shady. Their quiet energy and awkward one-liners make it difficult not to watch their every move onstage.

Fernandez as Powell gives us a dorkishly hopeless, yet fearless, leader who is hell-bent on proving to everyone that she is more than capable of guiding the crew to the finish line in one piece, despite being at a physical disadvantage. The cast as a whole works incredibly well together as an ensemble. 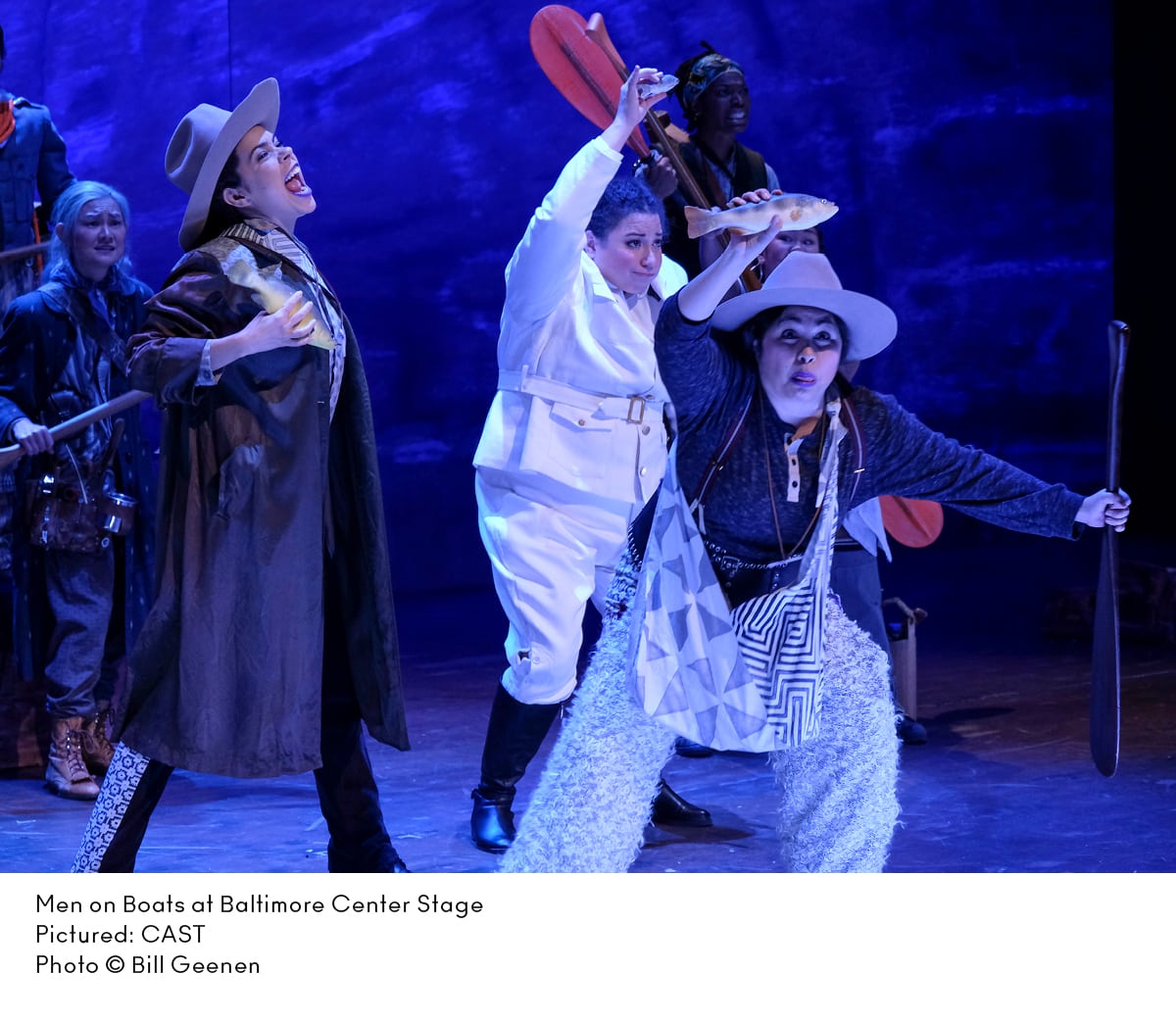 One would expect that a story centered on the dangers of exploring the wild unknown requires a set design that is equally as vast and complex. Instead, set designer Steph Cohen gives us a simply dressed stage, the most impressive and important element being the hand-painted backdrop of the Grand Canyon featured throughout. The simplicity of the set and minimal lighting cues leave room for the audience to focus more intently on the actors and the relationships their characters build, the conflicts that arise and the hilarity that ensues as they travel for weeks on end with low provisions, little sleep and in unforgiving natural elements.

Despite its raucous comedy, Men On Boats offers a sincere commentary on the hard truths that shape history. As is the case with most historic accounts, Powell’s well-documented expedition honors only one side – his side. It conveniently leaves out the experiences of natives who had already visited many of the landmarks Powell’s crew “discovered” and fought to keep their lands from the white men who claimed them, a fact that Men On Boats continuously notes. Throughout the script, Jaclyn Backhaus hints to the true nature of Powell’s expedition and what it meant for those who had lived along the river centuries before these men set foot in the canyon.

Baltimore Center Stage also gently reminds its audience through its program notes that, even as we enjoy our time spent in the theatre, their space is built on Native land, specifically that of the Piscataway Nation.

Baltimore Center Stage’s Men On Boats is a definite must-see this season. It’s a different take on history to be sure, but one that is desperately needed during a time of heated and not-so-civil political discourse. Oh, and if you choose to sit in the first few rows near the stage, you should prepare to get a little wet.

Running Time: 105 minutes with no intermission.