Now playing a limited engagement at Theatre Row, Fellowship for Performing Arts’ production of Paradise Lost – Tom Dulack’s stage adaptation of John Milton’s epic poem of the 17th century – is a condensed modernized version of the classic, aimed at young audiences (ages twelve and up) and their families, and at promoting the New York-based not-for-profit company’s mission of producing works “that articulate the Christian worldview.”

To make the age-old story, based on the Biblical narratives of the Fall of Man and the Fall of the Rebel Angels, more accessible for our current times, Dulack has largely forsaken Milton’s (and the Bible’s) archaic language in favor of a contemporary style, employing current expressions, imagery, and bits of humor. He also cuts (and combines) the number of characters to six and streamlines the more than 10,000 lines of Milton’s original ten-book poem into a retelling that runs just over an hour and a half. The new version, as directed by Michael Parva, gives a post-modern look and sound to the traditional religious theme – though one that is still archaically androcentric and misogynist in placing the blame on women, despite some politically-correct concessions to exploring Eve’s motivations and noting that Adam, too, had the free will to choose his own course of action.

In the lead, David Andrew Macdonald is an eloquent, commanding, seductive, and appropriately diabolical Lucifer. His charismatic speech retains something of the poetic quality of Milton, his good looks and persuasive charm captivate both Eve and the audience, and his rage against “the Tyrant” who displaced him and his expressed belief that it’s “better to reign in Hell than to serve in Heaven” render the basis of his vindictive behavior clear – though still deplorable.

Lou Liberatore turns in a hilarious performance as a whining, complaining, and equivocal Beelzebub, who questions Lucifer’s decisions and orders, but nonetheless remains his minion – especially steadfast and jubilant when things seem to be going well for the devils! And Alison Fraser kills it as the comical personification of Sin, Lucifer’s tawdry daughter/wife who is the stereotype of the woman behind the man, pushing him to get on with the temptation of Eve so the now pock-marked old “hag” (as her demonic husband calls her), whom he no longer finds attractive, can recover her youthful beauty in a deal to champion Death, their incestuous son.

In contrast with the three infernal figures, Robbie Simpson and Marina Shay as Adam and Eve are youthful and innocent, smitten with the beauty of the Garden of Eden and each other, as they explore, learn, and discover the joys of love and Paradise. But her passionate quest for knowledge from the very beginning of her existence (along with her vanity) allows her to be tempted by Lucifer to eat the forbidden fruit from the Tree of the Knowledge of Good and Evil, disobeying the rule of God and condemning humankind to pay the ultimate price for her misdeed. The enamored Adam, portrayed as something of a milquetoast here, willingly risks everything to stand by his woman, taking a bite of the apple and then accompanying her in the Expulsion from the Garden – even though, after enticing him, she tearfully apologizes and tells him not to leave with her. Rounding out the cast is Mel Johnson Jr. as the magisterial Archangel Gabriel (conflated by Dulack with Milton’s passages citing fellow archangels Raphael and Michael), who appears to warn them about Lucifer, to explicate the backstory, and to give them a glimpse into the future. All deliver the personalities of the iconic characters and morals of the didactic narrative, but in sometimes long-winded and preachy segments that could use some editing to maintain the fluid pacing of the rest of the show.

The well-cast actors are supported by a dazzling artistic design that brings the familiar story to life and adds unexpected updates and laughs (including the motor scooter on which Sin enters and exits the stage, and the vintage phones on which Lucifer and Beelzebub converse). Harry Feiner’s stunning set, enhanced by Jahn Narum’s transporting scrim projections and Phil Monat’s spectacular lighting, easily shifts from the glowing smoky Lake of Fire in Hell to the lush vegetation of the Garden of Eden, and through masterpieces of art depicting the Creation of Adam and the Fall of the Rebel Angels. Costumes by Sydney Maresca define the timeless characters, with an array of clothing from different centuries, shocking lengths of human intestines wrapped around Sin’s gown, and flesh-colored undergarments that suggest the nakedness of Adam and Eve in Paradise. Original music and sound by John Gromada add immeasurably to the dramatic effects of the scenes.

With its production of Tom Dulack’s Paradise Lost, Fellowship for Performing Arts offers an eye-catching and interesting take on Milton’s legendary work, with performances that impress, even when the updated retelling isn’t fully satisfying in terms of the position of women in today’s world. 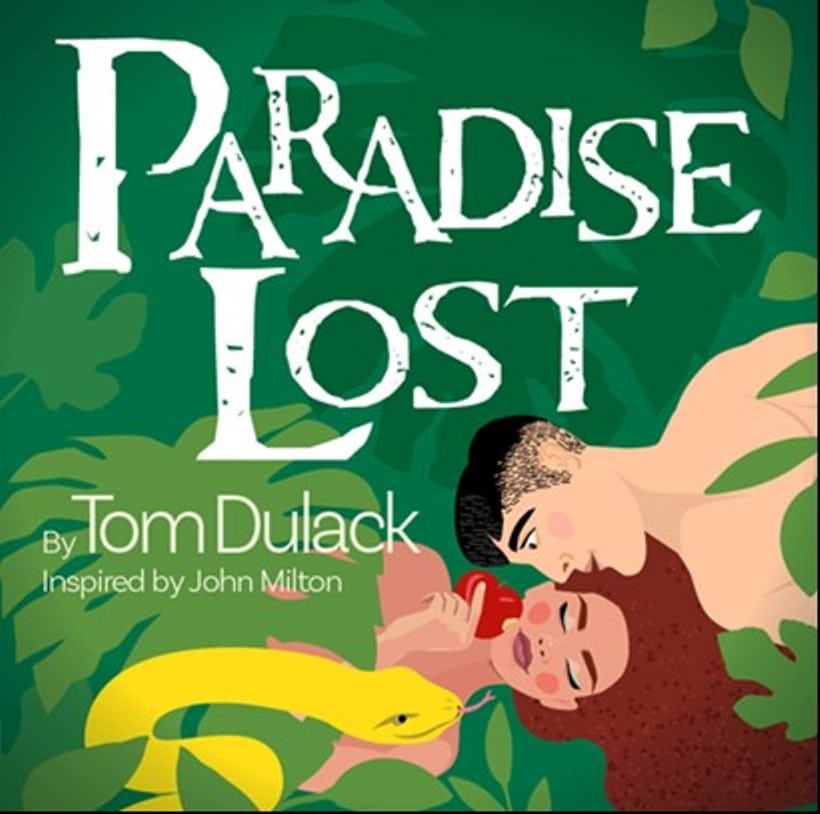