Russian author Ivan Turgenev’s autobiographical short story “First Love,” first published in 1860, is the subject of a new retelling in Culture Project’s About Love, now playing a limited engagement at The Sheen Center. Written and directed by Will Pomerantz, the re-envisioned memory play, with an original score by jazz artist Nancy Harrow, presents the personal coming-of-age account of a young man’s romantic awakening, resultant heartbreak, and hard-learned life lessons during a family vacation in the Russian countryside in the summer of 1833.

Pomerantz’s entertaining direction is marked by engaging storytelling, fluid pacing, and clever theatrical staging that seamlessly combine narration and re-enactment, miming and movement, with segments of song and music and bits of humor interspersed amidst the sentiment. Employing a minimalist set with a platform stage, pieces of old wooden furniture, and a side wall hung with simple clothing hooks (scenic design by Brian C. Staton), he makes full use of The Sheen’s black box space, energetically moving the cast on, off, and around the stage, up the venue’s stairs to the balcony, and through a dark upstage opening. The actors actively enter and exit (with dramatic lighting by Allen Hahn), rearrange the dilapidated antique chairs and table, and change articles of their costumes in full view, without missing a beat or delaying the narrative. Every moment is well spent and well executed by the ensemble.

Jeffrey Kringer, in an impressive Off-Broadway debut, takes the lead as the central narrator and protagonist Peter, looking back 20 years later on the three momentous months that pushed the then-naïve sixteen-year-old boy to the cusp of adulthood. His portrayal, filled with recollections of passionate longing, shocking revelations, and surprising reactions, is fully three-dimensional and his voice is expressive, encompassing the character’s innocence, disappointments, illumination, and acceptance, as he navigates the unexpected twists and turns of intimate relationships and family dynamics with humor, emotion, and growing maturity.

Also making her Off-Broadway debut, Silvia Bond plays the fickle and flirtatious Zina, the object of Peter’s infatuation and “the source of all joy and torment,” who harbors a dark secret, along with some decidedly sadomasochistic inclinations. The 21-year-old daughter of an impoverished princess, summering with her mother in the nearby cottage, invites then taunts her coterie of sundry suitors with games and enticements, insults, humiliation, and rejection, all the while affecting an old-fashioned style of grace, elegance, and capricious femininity that captivates not just the young Peter, but others who are experienced enough to know better, yet still succumb to her wiles.

Each member of the versatile supporting cast – Helen Coxe, Dan Domingues, Tom Patterson, and Jean Tafler – plays three different roles, and all effectively deliver their characters’ distinctive personalities and demeanors. They also alternate in speaking occasional lines of Peter’s narration, when he refers to them or describes events at which they were present, contributing unexpectedly to the inventive structure of the story and the creative vitality of the production.

Among the most notable characterizations are Patterson and Tafler as Peter’s parents, respectively conveying the detachment and pain of a failing marriage, which the indifferent and inconstant husband and father entered not for love, but for the money and position of his long-suffering and unhappy older wife. Coxe is appropriately dour and imperious as the complaining princess, and the outstanding Domingues turns in a hilarious Russian prisyadka (the famous squat-and-kick Cossack dance) while seated on a chair (Tafler provides another humorous highlight in her cross-gender appearance as the gruff-voiced cigar-smoking man with a horse).

While Turgenev’s outdated gender-based archetypes can seem lamentably archaic in our current era (the scene of a man beating his lover, then being embraced, and later respected for it, is especially disturbing), Harrow’s jazz-infused music and lyrics interject a decidedly modern tone into the otherwise historicizing piece. Though intended to underscore the emotions and the universality of first love, they instead add an incongruous note that conflicts with what we’re seeing in the period-style furnishings and costumes (by Whitney Locher – which, at times, also conflict with the spoken memories of the narrator, as when Zina, in a white dress, is said to be wearing pink stripes or black). The most effective musical interludes (performed live by music director Misha Josephs on guitar, Ryan Berg on bass, Steve Picataggio on drums, and Ben Sutin on violin) are those that evoke the 19th-century Russian tradition (musical arrangements by Alphonso Horne and Owen Broder), without the glaring 20th-century anachronisms of Zina’s unsatisfying jazzy solos.

Despite some troubling archaisms and noticeable inconsistencies, Culture Project’s production of About Love offers a unique approach to storytelling, with an absorbing format, direction, and performances, and an imaginative design that bring Turgenev’s experiential novella to life. 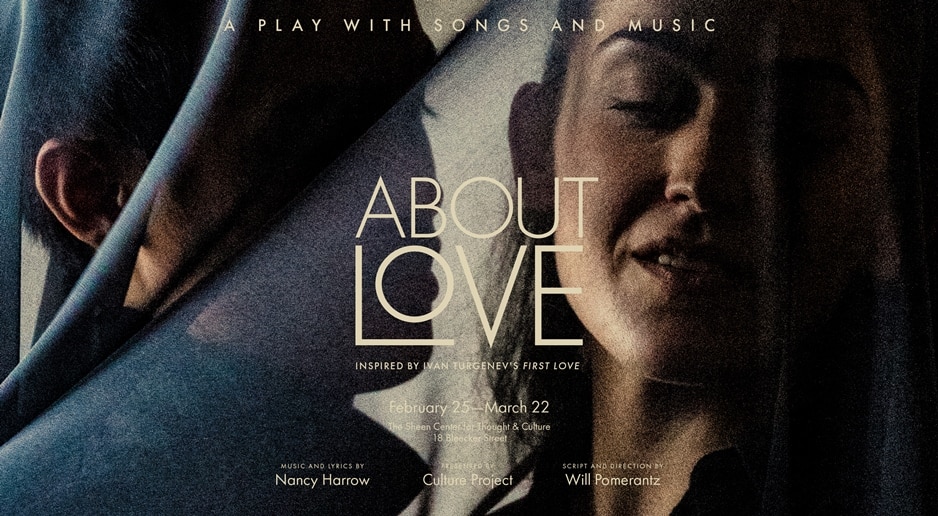