After the sold-out run of the Irish Repertory Theatre’s world-premiere Off-Broadway production of Love, Noël in the summer of 2019, the show has returned in a re-imagined digital reprise for the final performance of the company’s virtual 2020 summer season. Written and devised by Barry Day (who serves as both Literary Advisor to the Noël Coward Estate and Vice President of the Coward Archive Trust, and has written more than a dozen books on the legendary English playwright, composer, actor, singer, and director), the bio-musical tribute recounts the life, works, and times of “The Master” (1899-1973) through a selection of songs, letters, and anecdotes.

Under the remote direction of Charlotte Moore, New York cabaret favorites Steve Ross and KT Sullivan capture the spirit of Coward and his bygone era of high society, with its old-style sophistication, flair, and wit, while singing the songs he wrote and recounting what he said and what others said about him (including the spot-on description of “a Renaissance man, who just happened to live in the 20th century”). Ross, in classic black tie and tux and providing grand piano accompaniment, embodies the upper-crust panache and composure of the man, with an occasional outburst of humor or passion amidst his predominantly understated emotion and introspection. Sullivan shifts her vocal stylings and demeanor, at times to the point of parody, to conjure such noted friends and colleagues as Gertrude Lawrence, Marlene Dietrich, Greta Garbo, and Elaine Stritch. Together and individually, the two move around the refined interior setting and reminisce about Noël’s beloved songs, the letters he sent and received, and the people and experiences that inspired them.

And oh, what a setting! Filmed on location at The Players, the quintessentially rich, historic, and tasteful interior, filled with art, antiques, and impeccably preserved architectural detail, is as much a star as the performers. Founded by Edwin Booth in 1888, the private social club for members of the dramatic profession, the kindred arts, and their patrons is housed in a Gothic Revival mansion on Gramercy Park, which was modified by architect Stanford White for the organization. But, while it exudes an apropos ambiance, it is something of an anachronism for the female contemporaries represented in the show, since it was a men-only establishment until 1989 (when Helen Hayes became the first woman member), more than fifteen years after Coward’s death in 1973. That aside, it succeeds beautifully in evoking timeless memories of his period, class, and aesthetic.

For fans of Coward and his oeuvre, Love, Noël offers an intimate and authentic view of his charming and creative persona and a revue of 20 of his amusing and moving songs (“Mad about the Boy,” “Don’t Put your Daughter on the Stage, Mrs. Worthington,” and “World Weary” among them), in solos and duets by two of today’s most established cabaret artists (with a clear sound design by M. Florian Staab). For those who are not familiar with his life and work, it provides an introduction to one of the most prolific and iconic masters of theater’s past. 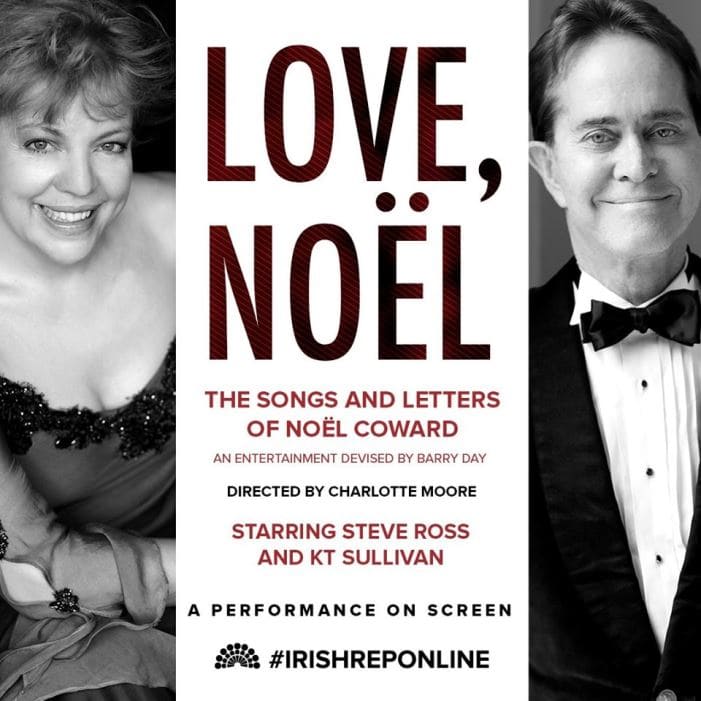 Love, Noël screens online at Irish Repertory Theatre, through Saturday, August 15, 2020. Advance reservations are free, but required, and voluntary donations  are welcome ($25 per person is suggested). Reserve now at www.irishrep.org/noelonscreen; your event link will be emailed two hours before your selected performance begins.