In mid-March DC-area theaters went dark and theatergoers’ calendars emptied of live shows to take in—but light and sound and performances are coming into view by way of Zoom and YouTube.

When we learned that Washington Stage Guild is producing a limited streaming engagement of George Bernard Shaw’s Don Juan in Hell over the coming Thanksgiving holiday weekend—giving audiences the opportunity to savor Shaw’s witty wordplay from the comfort of their homes—we were thrilled.  And we jumped at the chance to learn more.

Artistic Director Bill Largess explained: “As anxious as we are to get back on stage, that’s not possible at this time.” Streaming Don Juan in Hell over the Thanksgiving weekend struck the Stage Guild “as ideal — offering an intellectual ‘treat’ during a time when many of us will likely be more isolated than normal, unable to be with extended family because of the pandemic and looking for something to do over an unusual holiday weekend.”

Don Juan in Hell draws its characters from Shaw’s Man and Superman. In Don Juan in Hell, they dream that they are figures from Mozart’s Don Giovanni, the opera about a very randy man who may or may not meet his comeuppance. The characters fully debate love, life, marriage, and the very unexpected. After all, what do those who flout convention talk about?

Largess indicated that “the actors will perform from their own homes and come together online to give this brilliant play a long-overdue DC hearing.” The four-member cast includes Nathan Whitmer as Don Juan, Emelie Faith Thompson as love interest Dona Ana, with Morgan Duncan as The Devil, and Bill Largess. Directing is Steven Carpenter.

Board President Laura Giannarelli added this personal invitation: “I hope you’ll be able to tune in and enjoy some Shaw to go along with your holiday celebrations!”

Washington Stage Guild has been producing live theater since 1986. The company has focused on neglected classics, unfamiliar works by familiar playwrights, and stimulating new plays.

In telephone conversations and emails, Carpenter, Largess, and Giannarelli, together described how Shaw’s verbal and intellectual bent as a playwright lends itself to an online format: Don Juan in Hell has no physical interactions; no kissing scene, no fistfight, little or nothing that asks the actors to do anything more than engage one another verbally in a philosophical debate about everything under the sun.

Offering more details, Carpenter said, “When we started batting around ideas for a virtual performance, one of the first titles that occurred to me was Don Juan in Hell. Shaw is our signature playwright, so it only seemed fitting that we’d consider one of his pieces. Even though they were written nearly a century ago, there is often contemporary relevance to be found in his scripts, and Don Juan is no exception. Shaw’s condemnation of the baser sides of humanity rings particularly true in our current politicized climate, and his views on male/female relationships, from both sides of the issue, are always thought-provoking.”

Carpenter noted that “the small cast size helped with our technical worries — we’d only need to get four people up and running. And as with much of Shaw, Don Juan consists primarily of people (or spirits, or what-have-you) sitting around talking — nothing much is asked for in the way of staging, properties, set, etc. This would fit nicely within the confines of the Zoom windows of an online presentation.”

Carpenter then added, “While our presentation doesn’t try to draw a specific parallel between Shaw’s words and the Zoom-iverse, I think it embraces the norm in which we now find ourselves, looking for connections and investigating deep, important human questions, even through a screen.”

Broadening the conversation with WSG leadership, we learned that the company has made upgrades to its lighting system in its performance space at the Undercroft Theater, with a generous matching grant from the DC Commission on the Arts and the Humanities (DCCAH). Grant-matching funds came from WSG’s loyal patrons who donated $35,000 and the many subscribers who donated the unused tickets on their 2019–20 season passes.

As for what the post-COVID world holds, Largess, Giannarelli, and Carpenter shared this collaborative thought: “The future is definitely a bit uncertain! We don’t know when audiences will feel comfortable returning to live performance, what cleaning and safety protocols we’ll need to have in place, what role a vaccine will play in reassuring people that it’s safe to begin to resume ‘normal’ life again — including going to see plays. Lots of question marks. But live theater won’t disappear just because of COVID-19. While theaters may incorporate online components into their programming longterm — even after the pandemic is in the rear view mirror — we have no doubt that a live in-person experience is unbeatable and we plan to be ready to roll up our sleeves and get to work again with gusto. In the meantime, we’re contemplating more online offerings for our patrons in the coming months.”

The conversations ended with these joint words from Carpenter, Largess, and Giannarelli: “We’re proud and excited to share those words with our supporters, fans, and newcomers looking for a stimulating evening of thought and ideas.” 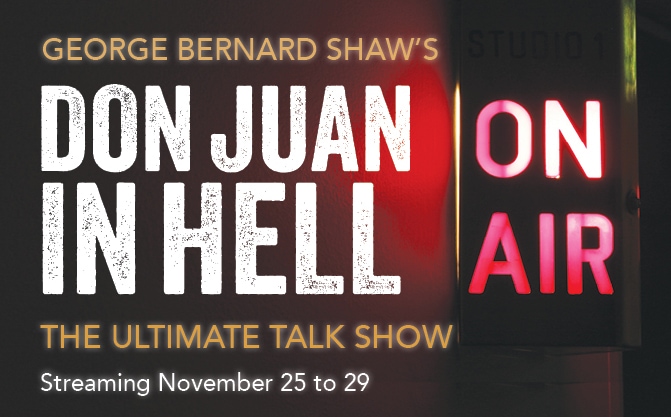 Washington Stage Guild’s limited engagement of Don Juan in Hell will stream on WSG’s YouTube channel, premiering at 8:00 pm ET Wednesday, November 25, and continuing available through Sunday, November 29, 2020, at 8:00 pm. No ticket purchase is required, but donations will be accepted. Viewers may subscribe to the channel in advance of the premiere date, but it is not necessary to do so in order to click on the link and enjoy. Subscribers will get notification when the Don Juan in Hell Premiere page is created and will be able to comment and ask questions prior to the unveiling of this online theatrical production. Subscribers will also get a reminder 30 minutes before the premiere starts and another at the designated time.