Ready for some fun? You’ve earned it.

Escape from the messy troubled real world is just a click away with the engaging audio farce from the intrepid folk at Edge of the Universe Players 2. The company is not letting the COVID pandemic and the darkness of area venues take away from some much needed, and healthy, levity and pleasure.

It’s a joy for the ears and the imagination. A sweet morsel topped with fresh meringue and sweet custard, like an old-fashioned but new-again remembered dessert; perhaps a Meringue Snowballs in Custard or Pavlova. It’s a podcast of Chekhov’s comical concoction The Marriage Proposal.

Now dark like most DMV theater companies, the Edge of the Universe Players 2 still found a way to meet its theatrical mission with happy audio play experience. “We decided on the audio format because of the tremendous power of the theater of the mind,” says Co-Producer and founding board member Bill Goodman. “We believe that the visual imagination often exceeds actual visual images.”

Chekhov’s set-up is this: a young man of some means, clearly unsure of himself, a hypocritical type named Ivan Vassilevitch Lomov (a stammering, whimpering Jamie Smithson) comes to court and propose to his neighbor, Natalya Stepanovna (a hilarious Kimberly Gilbert, steely-eyed at one moment, shedding tears the next). She is a young woman who lives with eyes wide open who can throw words at her suitor like a stiletto. As the podcast listener comes to know Ivan and Natalya they are a bickering pair, who can pick a verbal spat on topics from centuries-old property boundary lines (“These Meadows aren’t valuable. They only come to about 12 acres, but that’s not the point. It’s the unfairness!”) to whose hunting dog is superior in looks and hunting capabilities (“Papa only paid 85 for his hound Messer, and Messer is much better than Guesser!”).

Add to the volatile mix Natalya’s suspicious-at-first landowning father Sepan (a solidly brash Cody Mickell) and a delicious imaginative half hour is afoot … for free.

Written by Chekhov over a century ago, the script of The Marriage Proposal remains fresh and cute. It is shiny-surface Chekhov full of over-the-top bickering and playfullness (“Why don’t I put a bullet into my brain? I deserve to die! Give me a knife … a pistol!”) with the desire for love to overcome misinterpretations.

The successful relish of this Edge of the Universe Players 2 podcast owes much to its superior sound quality and effects. The audio is utterly crisp. That allows the pleasure of the imagination to take hold whether one listens through speakers or headsets (I did both). Applause from this reviewer to David Bryan Jackson, who is credited with the sound design and audio production and who made sure a character’s trembles are “seen” and nuanced verbal annoyances “felt.” The sound work was accomplished at a distance with the actors, given health and safety restrictions. Kudos to DC area’s Naomi Robin who did the casting

Know that The Marriage Proposal is farce. It is broad. It is not deep drama about the nature of the world. Know that going in. But how refreshing to be taken away from conspiracies, lawsuits, transition matters, and MSNBC for 30 minutes. Cleared my brain for a return to that world along with some dessert, in my case chocolate babka.

Will the three characters in The Marriage Proposal live happily ever after? Listen in and you decide. 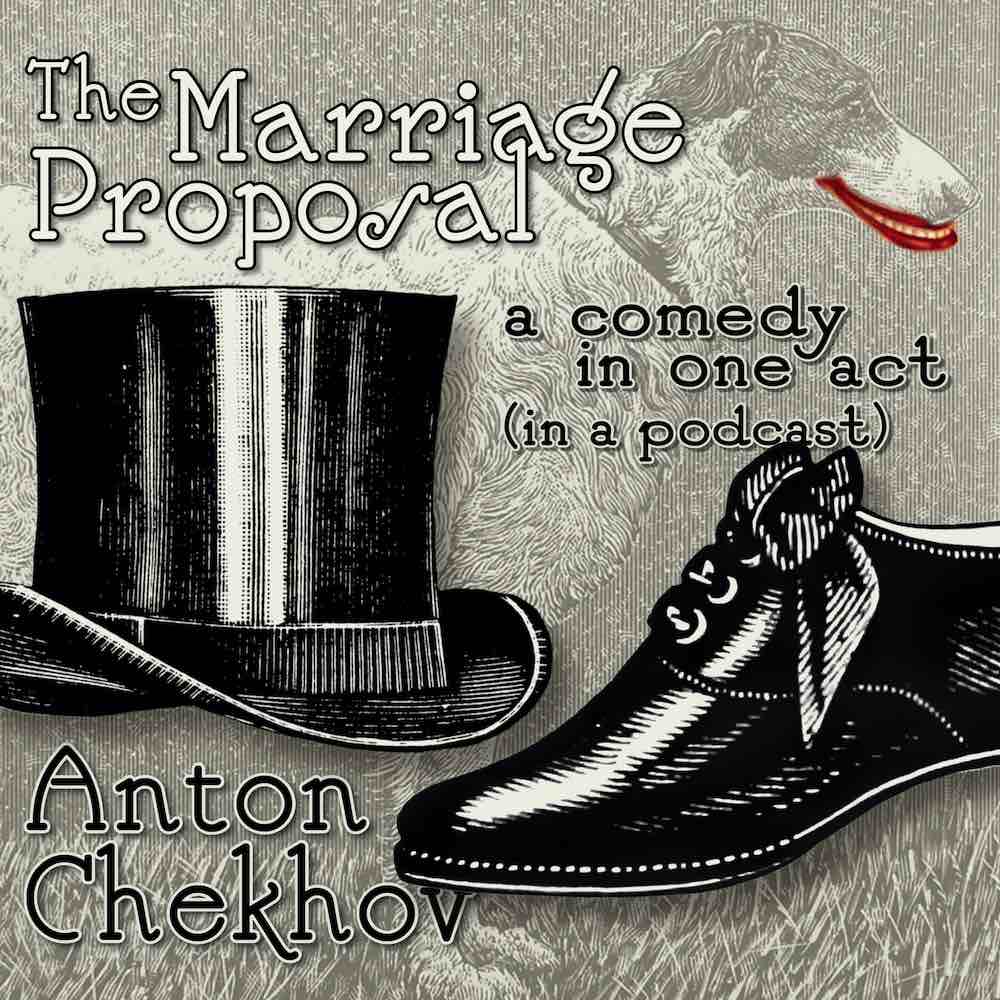 So, thanks to Edge of the Universe Players 2 for its pivot into the world of audio plays. Since this is free, one might take a stroll with it. Or bring it into your home to share with others along with your own ears.

Running time: About 25 minutes with no intermission

For more information about the organization and to experience The Marriage Proposal, which is available for free through December 2, 2020, visit The Edge of the Universe Players 2 website.