For the first time in its nearly 100-year history, the Macy’s Thanksgiving Day Parade, which launched in 1924, will be reimagined for our pandemic times by going virtual on both TV and online. Although the traditional 2.5 mile parade route through Manhattan has been cut to one block of 34th Street, and the usual crowd of more than 3.5 million people in attendance won’t be possible this year to ensure the public’s safety from COVID-19, the three-hour digital livestream will be available to viewers worldwide on the Verizon YouTube channel, and to another 50 million or more watching the nationwide television broadcast on NBC and Telemundo.

Executive Producer Susan Tercero assures everyone that, “While it may look different in execution . . . our incredible celebration on television featuring our signature character balloons, dazzling animated floats, whimsical clowns, world-class performances, and of course the arrival of Santa Claus . . . will once again herald the start of the holiday season.”

As part of Macy’s comprehensive health and wellness plan, developed in communication with government agency partners, the overall number of participants in the event has been reduced by approximately 88%; all participants, staff, and performers will be tested for COVID-19, undergo wellness checks prior to the Parade, will be socially distanced during staging and performances, and are required to wear face coverings. The majority of them hail from the New York tri-state area, and no one in the Parade is below the age of eighteen (previously selected regional High School and College Marching Band performances were deferred to the 2021 Macy’s Parade, with locally-based cultural and professional marching and musical ensembles taking over performance duties in the line-up).

The iconic balloons, which made their debut in 1927, will not be held by the typical 80-100 handlers. Instead, they will be attached to specially-designed vehicles (approved by the NYC Department of Transportation and the NYPD) and manned by a smaller vehicle team, thereby reducing the overall number of people needed beneath each one. And the balloon inflation event on the evening before Thanksgiving, generally open to the public, will not take place in 2020. But joining the spectacle this year will be new balloons of The Boss Baby (from DreamWorks Animation’s The Boss Baby: Family Business) and Red Titan (from Ryan’s World by Sunlight Entertainment and pocket.watch).

Parade organizers have also noted that the impact of this year’s pandemic-related cancellations on some of NYC’s most popular performing arts, entertainment, and cultural events was a significant loss felt by New Yorkers and visitors alike. So to keep audiences connected, theater-lovers can look forward to the best of Broadway being featured once again in this 94th edition of the parade, with pre-recorded performances from the casts of Ain’t Too Proud, Hamilton, Jagged Little Pill, and Mean Girls.

There will still be floats, with Dolly Parton (Nine to Five) scheduled to ride on “Home Sweet Home” from Cracker Barrel Old Country Store, along with appearances by Leslie Odom Jr. (Hamilton), The Big Apple Circus, the New York City Ballet, the giant balloon of Sponge Bob Square Pants and his pet snail Gary (from the Tony-winning musical), and other favorites. In addition, the Radio City Rockettes will bring their signature show-stopping high-energy spirit and precision to the staging area in front of Macy’s landmark Herald Square store. 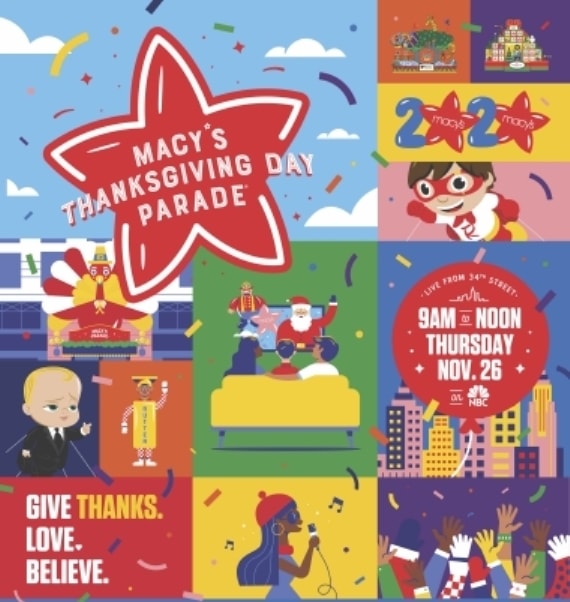