Ike Holter is a trickster playwright so right for our quicksand-ridden times. In his new audio play commissioned by Studio Theatre (he also directed), Holter creates a grand hall of mirrors full of disorienting situations and truth-seeking characters. It is entitled I Hate It Here: Stories from the End of the Old World.

Think of I Hate It Here as an exceptional audio short story collection. In its 80 minutes, it is full of off-center wit while remaining focused on those who have scars—small and large, emotional and physical—living with demoralizing situations. The podcast is packed with incisive observations about the human condition. Since the overall production is like a short-story collection or music album, there is an ever changing POV for each scene.

I Hate It Here is composed of self-contained pieces about 10 minutes in length on average. They vary in tone from quietly acerbic to keenly barbed and jaggedly witty. The time is now. The place anywhere. The playlets are populated with everyday folk inhabiting worlds upended by bewildering change. Holter has fabricated characters who seethe with hurt and ache that like emotional guerilla war can unhurriedly boil over into prickly interactions with others.

The peerless ensemble members each deftly portray a number of characters. How do they do so? While unseen, since this is an audio podcast, their voices and emotions vary across the aural spectrum in distinct characterizations. The cast includes actors from the DC area, Chicago, and beyond: Sydney Charles, Behzad Dabu, Kirsten Fitzgerald, Jennifer Mendenhall, Gabriel Ruiz, Tony Santiago, and Jaysen Wright.

The self-contained vignettes in I Hate It Here travel about as if teleported. There is a distraught mother who needs money to survive, a wedding reception as two people meet cute for what one thinks is the first time, a high school full of students’ sharp chatter, a phone call in which alleged workplace sexual misconduct is contemplated by two male friends, a male who describes a unique work setting as he, a person of color, serves a totally white privileged gathering, a woman slowly becoming hysterical as she considers what COVID has unloaded on her, an increasingly agitated debate among three friends about the definition and actions for activism.

Connecting the vignettes are original music and sounds. There is audiophile high quality to the production’s audio. There is nothing grainny or tinny, unless it was purposeful. I had to remind myself that the audio was accomplished by actors and crew who were distant from one another.

So let me thoroughly praise Studio’s exceptional technical production team. Kudos for the flawless work of Assistant Director Sivan Battat; Stage Manager Luisa Sánchez Colón; Sound Designer, Music Producer, and Mixer Mikhail Fiksel; and Music Director Gabriel Ruiz. This team through its post-production talents made I Hate It Here not a lean production. There is background sound that adds to the pop of audio; the ambience becomes the “visuals,” which can be subtle or vivid focusing a listener’s ears and mind. Who knew that listening for a vehicle to stop at a newly placed stop sign could carry such weight? The original music is no afterthought; its hip-hop or rock nature underpins scenes.

Kudos as well to Studio for this audio production, which is part of the theater’s newish Studio in Your Ears series of free audio dramas. To do it, Studio had to allocate funds specifically to support the creation of audio plays as part of its ongoing exploration of alternate modes of theatrical storytelling. 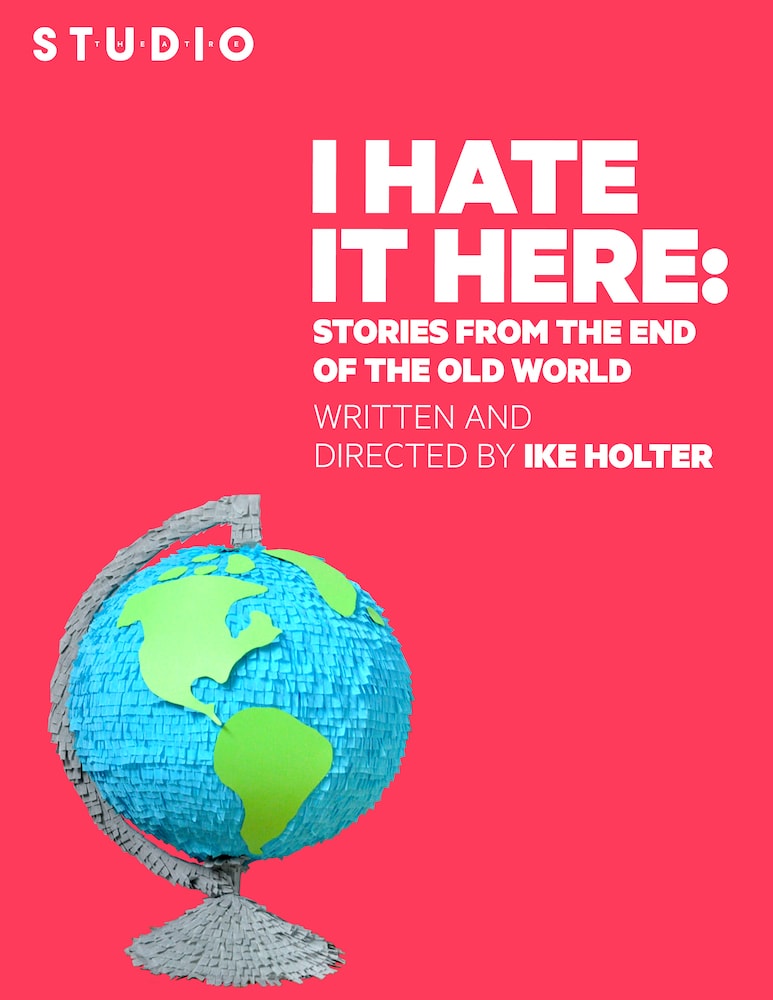 Holter, the cast, and crew created a most striking audio play capturing such rich details about the messy mood of America at war with itself. It is an America full of un-telegraphed gut punches. The play is bold and smart. It may not be for everyone, for some may not want not to take in such a seismic theatrical experience that does not hold back.

Then again, who among us has not stated under our breath or out loud, in response to challenging world events and tough personal situations, “Fuck it, or “Fuck this place,” as many of Holter’s characters verbalize. Those words are not so different from the catch phrase in the acclaimed movie Network from decades ago: “I’m mad as hell, and I’m not going to take this anymore!” Yet there is this, as one of Holter’s characters states: “I didn’t come to protest. I came for a take-out hamburger and just got caught up.”

Running time: About 80 minutes, with no intermission includes introductory remarks and end credits by David Muse.

Listen for free to I Hate It Here: Stories from the End of the Old World through March 11, 2021 on Studio Theatre’s website.

Note: Playwright Holter may be a new name to you, but remember his name. He is a 2017 winner of the Windham-Campbell Prize, one of the highest awards for playwriting in the world. Holter is a resident playwright at Victory Gardens Theater, and has been commissioned by The Kennedy Center, South Coast Rep, and The Playwrights’ Center. His work has been produced across the country from Goodman and Steppenwolf in Chicago to the Lily Tomlin Center in LA to Primary Stages off-Broadway.

RELATED: Studio’s new audio play is an anthem for a world on the brink (about I Hate It Here)

SEE ALSO: In time for the election, an audio play about political scheming from Studio (about the previous Studio in Your Ears production, Kings)