On the eve of the 20th anniversary of 9/11, the Kennedy Center presented the Concert of Remembrance, an elegant evening of music and spoken remembrances to honor the common man, those ordinary first responders and healthcare professionals who have served us throughout the pandemic.

The program was a free Concert Hall performance and part of the kickoff weekend to celebrate the 50th anniversary of the Kennedy Center.

David Rubinstein, Kennedy Center chairman, remarked that he hadn’t had the opportunity to welcome an audience to the Kennedy Center for the past 18 months, asking, “Is there anyone here who is not grateful [to be together again]?” A rousing response from the audience confirmed his excitement to be in-person again, thanks to the availability of vaccination, a security requirement to attend.

In fitting tribute, the concert opened with Aaron Copland’s “Fanfare for the Common Man” performed by the “The President’s Own” U.S. Marine Band right after the fanfare of John Stafford and John Williams’s stirring interpretation of the “Star Spangled Banner” performed by the National Symphony Orchestra under the direction of Gianandrea Noseda.

The Concert of Remembrance, through the healing power of music, spoke of what is best about the United States—our ideals and our democratic values. Patriotism and love of country were in the air as a unifying force to heal the past and lend hope to a future of inclusion and equality for all. In song and word, the Concert of Remembrance continually reminded us that our democratic values must be preserved.

Program selections were consciously deliberate in highlighting themes that remind us of the nation’s strengths: our melting pot of cultures, the diverse communities and peoples that are central to the USA, family life and the simple love of a mother for her children, our love of community, and our quest to overcome social divisions.

In an appearance by retired General Colin Powell, he recounted that he was in Lima, Peru, when he was told about the 9/11 terrorist attack. Working on an international treaty to support democracy, he urgently completed that treaty before making an emergency return home. General Powell told the audience that terrorism cannot destroy our belief in the democratic way, and he honored those front-line workers who keep us safe, saying, “They will never be forgotten.”

Dr. Francis Collins, the director of the National Institutes of Health, who led the team that developed the COVID-19 vaccination in record-breaking speed, spoke in hopeful terms about the future despite our nation’s current need for healing. In the face of tragedy and loss, Dr. Collins said the NIH was the National Institute of Hope to fight the ongoing pandemic and he also honored the first responders and healthcare workers who “face danger but do not flinch.”

Musical performances by the wonderful National Symphony Orchestra were a panoply of compositions filled with lush, sweeping harmonies that raised the emotional timbre through melodies both painful, perilous, and turbulent yet reassuring and comforting: the world premiere of “An Engraved American Mourning” by James Lee III (who made a personal appearance), “Mother and Child” by William Grant Still, “This Land” by Carlos Simon, and “God of Our Fathers” by George W. Warren and Thomas Knox.

Isabel Leonard, Grammy-winning mezzo soprano, sang the operatic version of four popular Broadway selections all composed by Leonard Bernstein, thematically honoring the rich cultural landscape of America and the common man: “Greeting” (from Arias and Barcarolle), “Take Care of This House” (from 1600 Pennsylvania Avenue), “Lonely Town” (from On the Town), and “Somewhere” (from West Side Story). Her clear, sonorous voice was full of beauty and emotional resonance. The audience gave her a standing ovation in appreciation.

Poetry was an addition to the program with Shirley Riggsbee, a nurse, who read a poem by Angela Trudell Vasquez reflecting on the emotional impact of losses from COVID-19 titled “Dispatches from Radar Hill”:

For the bus driver on his shift who left and never came back. For the nurse who beat breast cancer but not Covid.

For her colleagues who remember that every time a Billy Joel song came on she’d pump her fist in the air and scream “Billy” with joy and pure fan fury, for the receptionist who carries on with the fist pumping and shouts in her name. For her co-worker who told the story to us at her virtual funeral.

For our elders in nursing homes who gave and gave to their friends and family, their community buying all the Girl Scout cookies on the block, saving money for their grandkids’ birthdays  —who will miss their own in 2021.

For the teachers who taught until they could not, for their students who struggled to learn with them online.

For the parents who remain after, after so hard without your best friend, ally, accomplice there with you by your side an island snoring each night.

For those who lost their best friend and never got to say goodbye, or goodbye was a 2×4 inch screen, this the last time you saw them alive. For the widows who take poetry workshops three days after their love dies.

For those who remain carry the name, the people who remember their words, wit, wisdom, how they were scratch cooks, made chicken curry and rice, fry bread and pinto beans, sweet potato pie, peach cobbler, took turns driving the kids to practice, stomped puddles in rain…

Remember, remember, light a candle, say a prayer, a blessing some funny thing they said when alive when you laughed so hard you cried, but you didn’t, that was a road trip a family vacation when the back seat smelled less than fresh after a drive through the desert without air conditioning.

These are the days of our lives and to those who loved and lost. This poem is for you, for me.

Let us mourn all those we loved who no longer breathe this spring air or get to see their first Robin this season. The world is a lovely place when you care and have skin in the game and harbor a secret love in your heart for all things full of color, sound and feathers, soft sheets, chocolate ice cream, puppy breath, baby chuckles, your face in the morning, in the mirror smiling back so alive. 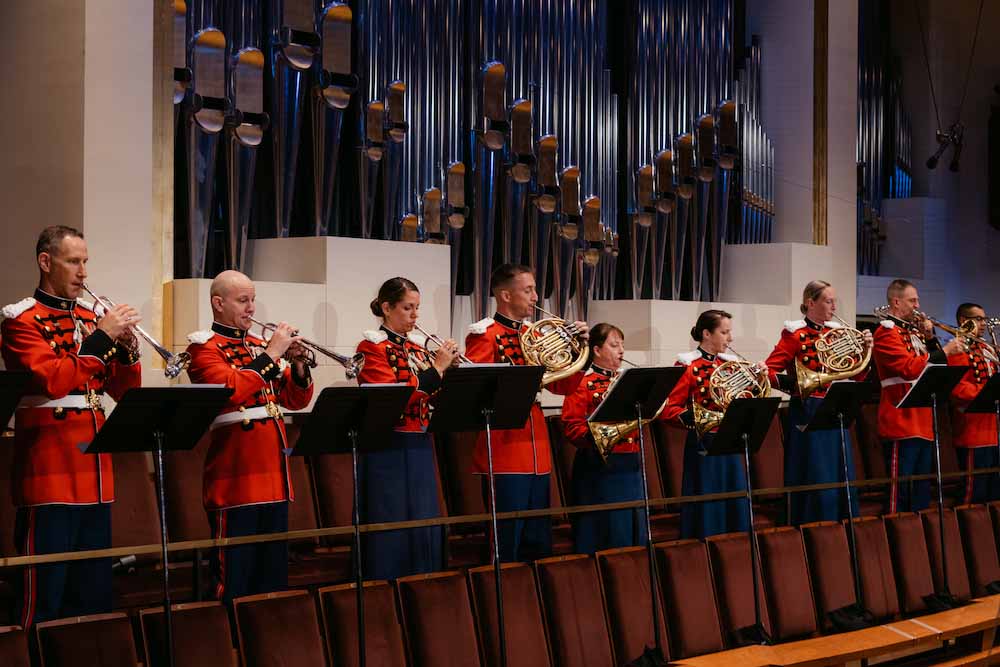 “America the Beautiful” performed by the U.S. Marine Band with the National Symphony Orchestra closed out a patriotically moving evening of remembrance and appreciation.

Running Time: 90 minutes with no intermission

The Concert of Remembrance played for one night only, September 10, 2021, in the Concert Hall of the Kennedy Center, 2700 F Street, NW, Washington, DC.