By now, Athol Fugard’s 1989 drama My Children! My Africa! should be considered a period piece. That it still speaks urgently is evidence of both our enduring racial divides and the South African playwright’s skill in exploring ageless themes of hope, despair, and intergenerational strife. Gerrad Alex Taylor directs Washington Stage Guild’s revival of Fugard’s play, which was written just before the end of apartheid as South Africa lurched toward the brink of monumental change.

The three-character drama plays out in the simple classroom of an all-Black high school in a segregated township. Thami, a highly promising Black student, has a spirited debate over women’s rights with a visiting white student, Isabel. Thami’s teacher, Mr. M, an old-school pedagogue who believes passionately in the power of words to uplift members of his race, encourages the pair to team up and enter a competitive quiz on English literature. Not only would it serve as a sterling example of interracial cooperation, if they win; the prize money may enable Thami to attend college.

The classroom is a perfect bubble. Here, Mr. M. indulges his dated ideas on education and from here Isabel can safely explore “The Location,” the ghetto in which Blacks are rigidly separated from whites. Thami goes along with Mr. M’s plan, studying hard with Isabel, until the winds of change infiltrate the school room’s protective walls. Soon, gales of militancy reach hurricane force. The old order of subservience is crushed and the trajectory of the characters’ lives is tragically altered.

DeJeanette Horne as Mr. M expertly tempers the older man’s pride and ferocity with his increasing vulnerability in a swiftly changing world. He has dedicated his entire life to education, living modestly in a single room, tracing a daily path from his tiny home to the classroom where, with a school bell as his scepter, he has reigned for decades. It is a singular, lonely existence, hemmed in by unyielding beliefs that ultimately place Mr. M on the wrong side of history.

Jordan Brown traces Thami’s evolution from an eager and engaging student to a brooding militant. His face, once animated with boundless possibilities, freezes into a glacial stare. His body, once charged with colt-like exuberance, becomes stonily defiant. Yet Brown also communicates the excruciating battle he is fighting within. As events transform Mr. M from a pedagogical hero into a dangerous impediment to change, Thami, too, needs to choose sides.

Libby Barnard’s Isabel is spunky and forceful, yet her interactions with both Thami and Mr. M lack the chemistry that would truly stir our empathy for this well-intentioned young woman, an eyewitness to change. She is at her best toward the end as she tries making sense of what happened and dedicates herself to racial harmony.

Fugard delicately traces the arc of change during the long first act. Isabel, enthusiastic about the upcoming contest, invites Thami and Mr. M to her parents’ home for tea. This generous gesture stops action in its tracks as Thami considers the ramifications of accepting a white family’s hospitality. All that happens thereafter shifts back toward conflict and separation. Despite this elegant dramatic device, however, the play has structural flaws. Too frequently, long monologues by each of the characters bog down the forward momentum, pushing the running time to nearly three hours.

Athol Fugard has gifted the world an extraordinary body of dramas exploring the legacy of racial injustice in South Africa. By extension, they give us insight into our struggles. As race-based intolerance resurfaces in increasingly dangerous forms, his plays are eloquent reminders that discrimination affects the oppressors and the oppressed alike.

My Children! My Africa! 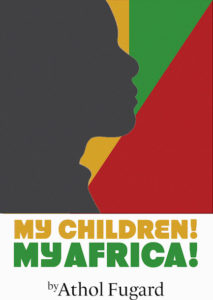 COVID Safety: The Washington Stage Guild has joined with other area theaters to require that patrons be vaccinated while attending performances at our theater. And we are committed to a rigorous set of health and safety protocols that include enhanced cleaning and social distancing in the theater. Masks will also be required for all guests, regardless of vaccination status. These policies will be in effect until the CDC and DC/federal government guidance deem them unnecessary. The Washington Stage Guild’s full health and safety policy is here.