Following the pandemic shutdown in March 2020, and a flood that forced them from their 30-year home at St. Peter’s Theater in January, the York Theatre Company has returned with their first live in-person mainstage production, Cheek to Cheek: Irving Berlin in Hollywood, playing a limited engagement in their temporary space at The Theatre at St. Jean’s. It’s a highly entertaining world-premiere tribute to the legendary composer and lyricist that dazzles with top-notch song and dance performances by a talented cast of six.

Conceived, directed, and choreographed by four-time Tony Award nominee and Great American Songbook expert Randy Skinner (42nd Street; Dames at Sea; Irving Berlin’s White Christmas; Ain’t Broadway Grand), with book by Barry Kleinbort and music direction by David Hancock Turner, the engaging musical revue features a selection of two dozen tunes that the self-taught Berlin (1888-1989) composed for the silver screen from 1927-65, during his long and prolific career. In total, he wrote an estimated 1,500 songs, including the scores for fifteen original Hollywood films, and received nine Academy Award nominations for them.

The numbers in the show are interspersed with those interesting facts and more notable biographical commentary by the company, and reenactments of personal behind-the-scenes vignettes that trace his connections with the studios and the stars, and the effects the cyclical history of the rise and fall of the movie musical had on him and his work. The song list, with a focus on Berlin’s heyday of the 1930s (a decade of economic depression and war), includes such uplifting favorites as “Blue Skies,” “Let’s Face the Music and Dance,” “Count Your Blessings,” and the eponymous “Cheek to Cheek,” along with many lesser-known pieces from Berlin’s classic films The Jazz Singer, Top Hat, Alexander’s Ragtime Band, Holiday Inn, Easter Parade, and White Christmas, and others that didn’t achieve the heights of fame as those iconic hits (though their popular title songs are conspicuously absent from the show, with its primary interest in song-and-dance routines).

Accompanied by a masterful five-piece orchestra (Turner on piano, Louis B. Crocco on drums/percussion, Noelle Rueschman and Amy Griffiths on reeds, and Joseph Wallace on bass), the terrific company of Phillip Attmore, Jeremy Benton, Victoria Byrd, Kaitlyn Davidson, Joseph Medeiros, and Melanie Moore capture the authentic vintage stylings, syncopation, and rhythms of the music and dance (with vocal arrangements and orchestrations by Fred Lassen, and dance arrangements by Rob Berman), while delivering the old-fashioned heartfelt emotions inherent in the lyrics.

From their featured solos to duets and production numbers, they never fail to impress with their outstanding vocals and harmonies, superb movements and flawless coordination. Among the highlights are the group’s amusing “Back to Back” (in which the dancers are just that, not facing each other, but still in perfect sync); high-energy tap dancing to “My Walking Stick” by Attmore and Benton; the cast’s lively performances of “The Piccolino” and “The Yam” (two dances invented by Berlin); and “The Best Things Happen While You’re Dancing,” spotlighting Benton and Moore with the entire company, and consummately delivering the overall mood and underlying message of the show, and Berlin’s love of the genre.

The performances are enhanced by period-style costumes by Nicole Wee, rich colorful lighting by Jason Kantrowitz and Ken Billington, sound by Julian Evans, and a scenic design by James Morgan, with projections by Brad Peterson that showcase images of Berlin, his movies, songs, and stars.

With the passing of Stephen Sondheim in November, it has become ever-more-timely to honor the immortal works of the great creators of unforgettable American musicals. The York has done that brilliantly with Cheek to Cheek: Irving Berlin in Hollywood. 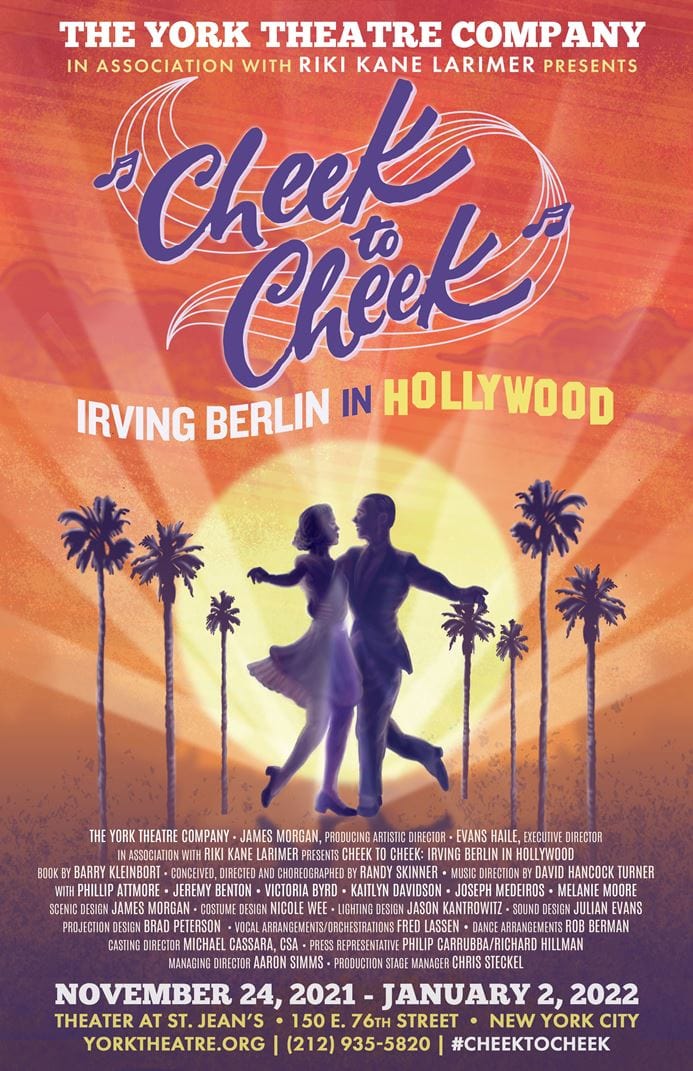 Cheek to Cheek: Irving Berlin in Hollywood plays through Sunday, January 2, 2022, at the York Theatre Company, performing at The Theatre at St. Jean’s, 150 East 76th Street, NYC. For tickets (priced at $55-75, plus a $4.00 fee), call the box office at (212) 935-5820, or go online. For the safety of all, COVID-19 policies established by the CDC and WHO will be strictly enforced. Proof of vaccination status and a valid photo ID will be required upon entry. Masks must be worn at all times.