After making its New York debut in 2019, One Christmas Carol, a one-man adaptation of Charles Dickens’ 1843 holiday favorite A Christmas Carol, is back in the City for a limited engagement at Off-Broadway’s The Chain Theater. Originally created by Douglas H. Baker to celebrate the season with his family and friends, he then performed the solo show annually for fourteen years, beginning with its Las Vegas premiere in 1995. Currently, his youngest son J. Max Baker continues the now 26-year-old family tradition – which has been seen in multiple regional productions in the US and around the globe – following in the footsteps of his father and older brother Kellan. And One Christmas Carol is one long-standing tradition that no one should miss!

The fast-paced minimalist show is a brilliantly condensed version of the 19th-century classic that focuses on the timeless moral lessons imparted in the story and the transformation of the central character of Ebenezer Scrooge from a misanthropic miser to a generous and loving benefactor. Performed in a black box theater with no set, props, or costume changes, and utilizing only three mismatched chairs that he moves around the space, Baker actively commands the stage and brings all the familiar figures to life – Scrooge, Bob Cratchit, Tiny Tim, Fezziwig, Belle, the ghosts of Marley and Christmases Past, Present, and Future, and two dozen more – in a gripping tour-de-force performance that captures the colorful personalities and delivers Dickens’ affecting message about what’s most important.

Without missing a beat, the thoroughly engaging actor shifts from character to character to narrator, interspersing witty direct-address asides to the audience and employing readily legible mime, particular facial expressions, demeanors, English accents, and vocal patterns to distinguish one from another and to define them with absolute clarity and individuality. Never is the viewer unsure of who is being portrayed at any given moment, as the masterful storyteller fluidly embodies adult and child, male and female, the living and the spirits who show Scrooge the light and the joy of love, family, and kindness.

Baker’s stellar performance is enhanced with a single Victorian-style costume (by Kay Baker) that evokes the era, dramatic lighting that captures the changing moods (light programming by Sarah Lurie), and expressive sound effects of bells, chimes, and chains, with which his movements are perfectly synchronized (with Monica Sanborn serving as board operator). One Christmas Carol is outstanding in every way, and a highly recommended way to put you in the holiday spirit by celebrating the consummately presented essence of a beloved classic. 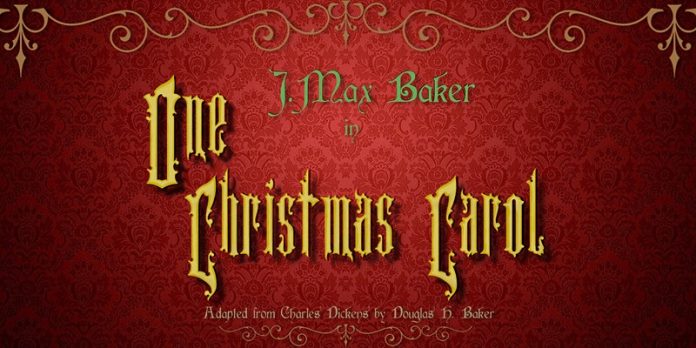 One Christmas Carol plays through Sunday, December 19, 2021, at The Chain Theatre, 312 West 36th Street, 4th floor, NYC. For tickets (priced at $25), go online. Everyone must show proof of COVID-19 vaccination to enter the building and must wear a mask at all times when inside.