Compulsion or the House Behind—the harrowing play now in its DC debut at Theater J—is loosely based on a scandal that rocked the literary and theatrical worlds in the 1950s.

The scandal was about The Diary of Anne Frank, a best-selling book followed by a smash Broadway hit. Both were purported to be based on the diary entries of an adolescent girl, hiding from the Nazi occupation in a secret annex in Amsterdam.

Word on the street was that the book had been rewritten, eliminating anything that was deemed “too Jewish” by the powers-that-be, who were, at the time, mostly Protestant and male. The young editor who salvaged the book was neither of the above, but she shared her bosses’ beliefs.

As a result, the Anne Frank whose Diary dominated Broadway—winning Tony Awards and the Pulitzer Prize in 1956—was turned into a symbol of sunshine and hope that had little to do with the Holocaust.

Put another way—stripped of her Jewish identity, the Anne Frank of the Broadway adaptation was rendered as lifeless as the puppet who plays her in Compulsion.

And that is the point. Compulsion is not about Anne Frank—who is portrayed as a marionette, the size of a six-year-old—but about those who were pulling the strings, manipulating the diary that had been left behind when its author was sent to one of the death camps.

The use of puppets was an integral part of Compulsion when it first opened at the Public Theater in New York in 2010. Joanna Gruenhut, who is now the associate artistic director of Theater J, was working at the Public at the time.

“When I found out that I would be directing Compulsion, the first thing I did was call Matt Acheson,” Gruenhut told me in a telephone interview before the show.

Acheson, a world-famous puppet-master, had created the original dolls, now on permanent display at the Anne Frank House in Amsterdam. “I asked him to do it again and he agreed.”

Marionettes, she added, are extremely difficult to make. “And pulling the strings is even harder.” Luckily, Acheson and puppeteer Eiren Stevenson were available to do the job.

Apart from the puppets, Compulsion boasts a superb cast. Paul Morella is stunning as the maddening—and ultimately repulsive—protagonist. Kimberly Gilbert does double duty as the women in his life—the editor who is in charge of the Diary and flirtatiously leads him on, and the wife, a saucy but literate sexpot, who tries to lead him away. Marcus Kyd plays so many roles so convincingly that I, like my colleague John Stoltenberg, was sometimes unaware that the characters were all inhabited by the same person. (Click here for John’s excellent review.)

I wondered what had triggered the decision to stage the revival in 2022. Why now? I asked.

Why not? Gruenhut replied, explaining that the play had originally been scheduled for the spring of 2020, but COVID and the lockdown put it on hold for nearly two years.

The delay turned out to be timely, however, since this year is the 75th anniversary of the Diary. It was first published in 1947 in Dutch, then in French. The U.S. edition appeared in 1952.

In addition, the recent spate of antisemitic attacks—ranging from the terrifying assault at a synagogue in Texas to the comments of people who ought to know better—are a reminder that the events that led to the Diary are not fictitious and that the death of Frank at the hands of the Nazis was not imagined or even exaggerated.

“So this is a perfect time for this play,” Gruenhut said. “We talk about six million Jews being murdered in the Holocaust, but six million is a statistic, and statistics don’t tell stories. Anne Frank’s story is important because she was one of the six million—a victim of antisemitism—and not a storybook version of a universal teenager.”

The protagonist of Compulsion—called Sid Silver—is a stand-in for Meyer Levin, the real-life author who wrote fictional biographies before becoming obsessed with Anne Frank. In the play, which is based on Levin’s account, he struggles to get those who control the legal rights to accept his adaptation instead of the blander one.

Paul Morella gives a remarkable performance as Silver, tracing his downfall as he spirals from funny but argumentative to annoying and ultimately too horrifying to bear.

Antisemitism is rife in this play. Even the young editor, Miss Mermin—who is modeled on the real-life Barbara Epstein—admits that she finds the Holocaust “depressing.”

Is The Diary of Anne Frank a Jewish story? Miss Mermin thinks not. And her decision is subsequently echoed by others in the publishing industry, along with all the lawyers and producers (denounced by Silver as “assimilationist communists”) as well as Otto Frank, the diarist’s father, who is the only member of the family to survive the death camps of the Nazis.

Even Silver’s French wife, who starts out as supportive, begins to lose patience. (It is she, we find out, who brings the Diary to her husband’s attention, having discovered the book at a bookstall in Paris.)

In a scene so stunning that one can almost see the lightning on stage, Kimberly Gilbert, who plays both women, slowly strips away her publisher’s power garb and morphs into the aggrieved wife who cannot bear another moment of this madness. It’s an electric moment, drawing gasps from the audience, and a fitting end to Act One.

“It’s the kind of moment that sums up the magic of theater,” Gruenhut said. Yet the scene itself is completely new. It is one of several changes in the script that she and the playwright, Rinne B. Groff, made, working together (but never in the same room) over several months.

For Johanna Gruenhut, reinterpreting the way a play should end is not unusual. She grew up in Manhattan and attended Ramaz, the prestigious Jewish day school where—along with all the usual high school subjects, such as history and math—she studied Talmud, learning to analyze Biblical texts and compare different interpretations over the centuries.

That ability—to see different meanings in chapter and verse—prepared her for directing plays that, like Compulsion, can be seen in different ways. “Talmud study is a very useful approach for a director. It’s a way of looking at a script from many different angles.”

She went on to Boston University, where she did a double major in film and comparative religion. But while she started out as an actor, she quickly did an about-face, realizing that she preferred working behind the scenes.

“To me, this play is about storytelling and the suspension of belief,” she concluded. “That’s the power of theater, and the source of its ability to provoke change.”

Now 41, Gruenhut is married and lives with her family in Baltimore. Like many other parents, she spent most of the pandemic home-schooling her children, but found time, in between lessons, to read scripts and direct an audio play for Theater J. 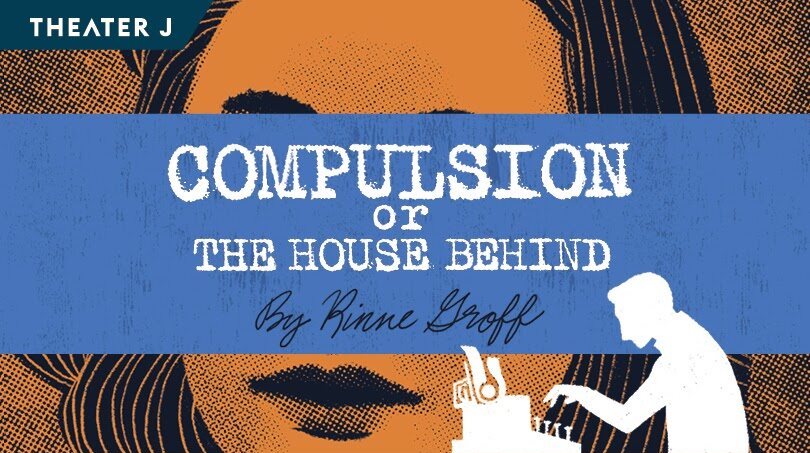 The program for Compulsion or the House Behind is online here.

COVID Safety: In accordance with the Edlavitch DCJCC policy, all individuals will be required to show proof of full vaccination each time they enter the EDCJCC by presenting either digital documentation on a smartphone or a physical copy of their vaccination card. Fully vaccinated means either that 14 days have passed since receiving the second dose of an FDA- or WHO-authorized double-dose vaccine or since receiving the sole dose of an FDA- or WHO-authorized single-dose vaccine. Individuals with medical or religious exemptions to vaccinations will be required to show proof of a negative COVID-19 PCR test taken within 72 hours of their arrival to the EDCJCC. Mask wearing will be required inside of the building by all people at all times. Only performers and guests invited on stage may be unmasked. Complete Edlavitch DCJCC Safety Guidelines are here.