The British Players’ next production is The Audience, a play about Queen Elizabeth II written by Peter Morgan for Helen Mirren. It opens on March 18 at Kensington Town Hall in Kensington, MD. Coproducer Chrish Kresge talked with Director Peter Harrold about the play’s storied past, the challenges it poses, and how it resonates today. 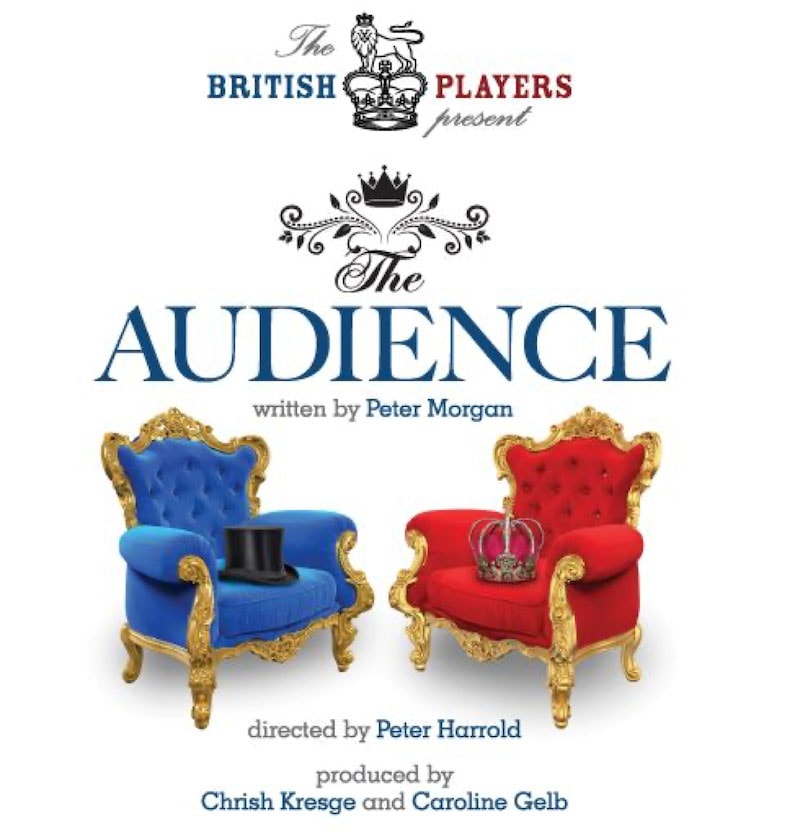 Peter, how does this play relate to other popular movies and series about Queen Elizabeth II, such as The Crown (the Netflix series) and the movie The Queen?

Well, they were all written by Peter Morgan, that’s the first and obvious connection. The Queen came first, starring, magnificently, Helen Mirren, which is the one that she won the Oscar for. And they so much enjoyed that collaboration that he decided to write a stage play featuring Helen Mirren as the Queen. Morgan wrote the play, The Audience, explicitly for her. It’s a very simple idea: the Audience is the weekly meeting that takes place between the Queen and her Prime Minister. It’s a completely private meeting. There are no assistants, no recording, no private secretaries taking notes or passing information. It’s just the Queen and a Prime Minister, and she’s had 14 Prime Ministers so far. The play is essentially the Queen with a series of Prime Ministers.

The Audience was a success and Helen Mirren won a Tony for it, and then Netflix approached Peter Morgan with the idea of doing the TV series, which became The Crown. If you look very carefully, there’s some fine print when The Crown starts. It says, The Crown by Peter Morgan, and there’s a little footnote that says, based on the play, The Audience.

The Crown follows the same time period as The Audience, starting from the beginning of the Queen’s reign. (Although actually we don’t know when The Crown is going to finish.)

Many of the individual scenes from the play were imported word for word into The Audience. I could think particularly of scenes with Winston Churchill, Mrs. Thatcher, David Cameron, and perhaps most explicitly, Anthony Eden, that are just word-for-word. And why not? He wrote them very well the first time, so why not use them a second time? So this is a package of three things: a movie at the beginning, the TV series The Crown at the end, and this play, The Audience, in the middle.

What are the main challenges that you as the director faced staging The Audience, given what’s been going on in the last couple of years?

Well, I think we could talk about the challenges from two different aspects. First of all, the British Players decided to do this play in 2019. We held the auditions in December of that year and began to rehearse in January, 2020. We were due to open in March 2020.

We were having our last rehearsal on that Thursday, March 12, and we were going to open on March 23. March 12 is the day that the pandemic really became hugely important on the East Coast of America. The first set of restrictions came out that day, and we had a big emotional meeting with the cast and the production team that night instead of a rehearsal. We reached the terribly difficult decision that we could not go ahead, and we had to cancel the show even though we were ready to go on stage.

Happily, here we are, two years later and we’ve been able to get ready to open in two weeks’ time. The more fundamental challenges of staging this play are in a sense straightforward and very clear. This is a series of conversations between the Queen and the Prime Ministers. Two people on stage, nothing actually happens, apart from the conversation. There’s no whodunnit, no love story, and no mystery to be solved. This is about the events of the day and the political context of the life of the Queen.

Therefore the first thing is to make it interesting to the audience who comes to see it. I don’t think that’s terribly difficult because the text itself is hugely interesting. The challenge is not to let it get too static with people just sitting and chatting in chairs.

Then the other big challenge is that the Queen starts the play at age 25 and finishes at age 85. If the play was written chronologically, that would be one thing, but Peter Morgan chose not to do that. He chose to start when she’s in her 50s and go backward and forward. We see her middle-aged; we see her young; we see her back to being young and then back to being old again, and then being middle-aged again. And we chose to follow Helen Mirren’s example of it being one actress who performs the Queen at all of these stages. So that challenge is a huge one for the production team. And it’s an even huger one for the actress who has to portray the same person over a period of 60 years. There isn’t time to go and change your makeup every time and draw lines on your face and take them off. It’s done with the costumes and with the hair, and with the acting skills of Elizabeth Keith, our wonderful actress who performs the role of the Queen.

Did the Queen have any favorites among the Prime Ministers? Do you?

Well, in the play they’re very explicit about the fact that they believed the Queen’s favorite was Harold Wilson, who was the Prime Minister first in the 1960s and then came back in the 1970s. And to an extent that would be the same for me because he and I went to the same university and got the same degree. His was much better than mine, but nevertheless, we identify in that sense. The first election that Wilson took part in was when I was in school and it was a fairly progressive school. We were supposed to be interested in politics and we had debates and things like that.

The Labor party was not in general terribly popular with the middle class. I had a relatively middle-class background at that time, and I was one of those who advocated for Harold Wilson. So my first political awakening was when Harold Wilson was standing to be Prime Minister for the first time. And, as if that weren’t enough, he and I share a birthday! So I suppose he’s always been a favorite of mine.

In contrast, Peter Morgan clearly doesn’t like Tony Blair very much, because Tony Blair only features in about ten lines of this entire play. He does a bit better in The Crown, and he did a lot better in the film, The Queen.

I was a big fan of Tony Blair’s when he won his first election. I thought he was a wonderful leader at that time, helping Britain recover after the years of Mrs. Thatcher. And then of course he became disastrous during the latter phases of his leadership with the difficulties that the Iraq war posed. Being a professional economist, I like Gordon Brown too, but he didn’t do terribly well.

One of the most powerful scenes in the play is when we see the Queen with Mrs. Thatcher. The scene with Anthony Eden is a favorite as well, but there are many moving moments in the play.

How relevant or topical is this play right now, and what do you think the audiences that go to The Audience might take away from it?

Obviously, it’s timely because it’s the Queen’s Platinum Jubilee, celebrating her 70 years on the throne. She is by far the longest-serving monarch in the UK, and probably almost certainly the longest-serving head of state of any country in history. But when you hear some of the words in the play, such as the interview with Eden and a snippet of an interview with Blair when he’s discussing the Suez crisis, it is oddly reminiscent of some of the debates that we are hearing now with the crisis in Ukraine.

I think you will get a feeling of history repeating itself when you see some of these scenes. Much of it remains highly relevant as we see during the scene with the Queen and Mrs. Thatcher, and the debate over whether government should be here to look after the poor and make sure everyone in the society is fine, or whether the job of government is to make a framework for the private sector to do as well as possible. These sorts of extremes about the role of government come through very sharply in that debate. These things resonate even though Peter Morgan is not a political writer in the pure sense of the word. He’s not trying to say something about politics; he’s interested in the people and the characters. But you certainly cannot help but see the way that the politics come to life.

What sort of audience reaction are you hoping for? And what would you say to entice audiences to see the play?

Well, first I would say please come, we will make you feel as safe as possible in the theater. We hope that they will be both entertained and educated because you learn a lot about the Queen and you learn a lot about Prime Ministers, albeit in quick segments. And I hope it stimulates. Many times, you go to a play and you walk out and you say, “Well, that was fun, let’s go home now.” And times when you walk out and you want to talk about particular scenes or characters, especially when actors are portraying historical characters. Here we’re not doing a series of impersonations, which would be silly, but we are trying to portray the essence of the peoples’ characters. So I hope it will stimulate audiences to have conversations and to have a good evening. It isn’t merely losing yourself in the theater, it’s also having intellectual stimulation from the theater. I really hope the play does that.

COVID Safety: all attendees aged 2+ must wear a KF-94, KN-95 or N-95 mask at all times when inside the venue unless actively eating or drinking in their assigned seat. The British Players’ complete Health and Safety and COVID-19 policy is here.

Peter Harrold is delighted to be making his debut as a director with the British Players with this wonderful play and to be working with this talented and dedicated production team and great cast. He has appeared many times in British Players productions, most recently as Reggie in Quartet in 2018.  In addition, he has performed locally with the Little Theater of Alexandria (Key for Two), Rockville Little Theater (An Inspector Calls, Go Back for Murder), and Kensington Arts Theater (Sherlock Holmes’ Final Adventure). He also has appeared on and directed for various stages around the world during his peripatetic career, notably in Seychelles, China, and Ghana. Since retiring, Peter has been teaching at George Washington University and enjoying long summers in France.