Mosaic Theater Company of DC has announced its compelling 2022/23 season, the first selected and planned by Mosaic’s new artistic director, Reginald L. Douglas. The inspiring lineup aims to spark conversation across DC with a series of productions and special events that engage artists and community members around issues of and for the moment.

“At Mosaic, we believe that theater at its best can be a catalyst for conversation and community building, and this season wonderfully carries forth that vision,” Douglas said. “It is my honor to build upon Mosaic’s foundation of producing theater that connects across cultures with this season of new work at all stages of development — from new play readings to world- and DC-premiere productions — all created by a diverse cadre of bold theater-makers. This next chapter for Mosaic Theater centers our core values of artistic excellence, empathy onstage and off, and joy, and celebrates theater’s unique ability to bring people together in conversation and collaboration. We cannot wait to welcome audiences to participate in this inspiring new journey with us.”

The season opens in the fall with The Till Trilogy​, a series of plays by noted playwright Ifa Bayeza that reflect on the life, death, and legacy of Emmett Till, whose murder in 1955 remains one of the most pivotal moments in American history. Under the direction of the acclaimed Talvin Wilks, the three plays — The Ballad of Emmett Till, Benevolence, and the world premiere of That Summer in Sumner — will star 10 actors performing in rotating repertory for the first time. Filled with music, poetry, and imagination, this rare theatrical event will honor the ongoing fight for racial justice in our country and offer audiences of all ages an opportunity for collective reckoning, reflection, and response.

“A key theme of The Till Trilogy is how the spirit and courage of this boy and his mother and family galvanized people worldwide into what would become one of the greatest human and civil rights movements in history,” Bayeza said. “Today, when our nation stands at a precipice with growing forces determined to set us back, push us down, and break our spirit, Mosaic Theater’s production is even more inspiring and important.” 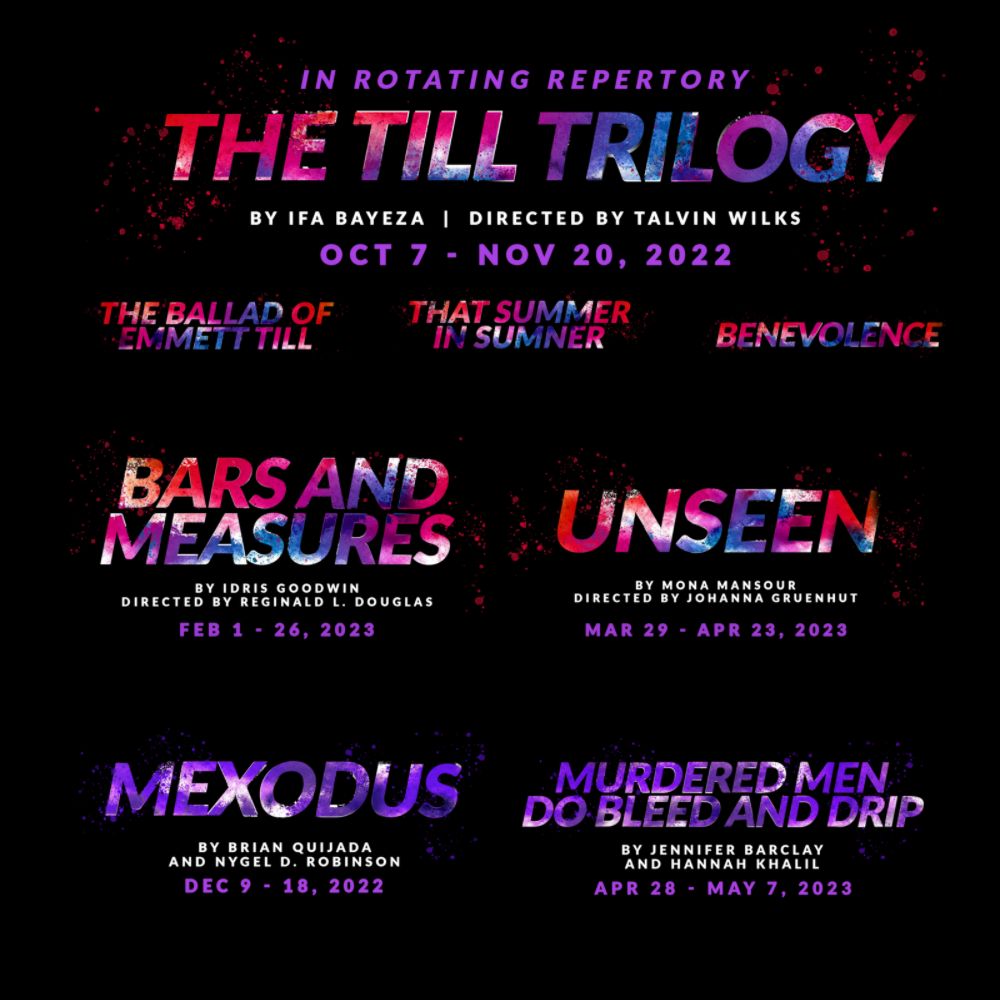 The season continues with the directorial debut of Mosaic’s new artistic director, Reginald L. Douglas: Idris Goodwin’s celebrated play with music, Bars and Measures. Eric, a classical pianist, and Bilal, a jazz musician, are brothers by blood, united through a love of music but separated by prison bars. When Bilal’s trial reveals hidden secrets and unexpected truths, the young men are forced to ask whether their love and music can withstand betrayal. Inspired by true events, Bars and Measures reflects on faith, family, and politics with equal parts imagination and intensity and will feature an original jazz score commissioned especially for the production.

Award-winning playwright Mona Mansour returns to Mosaic Theater with her heartfelt and suspenseful new work, Unseen. The play follows what happens when American conflict photographer Mia wakes up in her ex-girlfriend’s Istanbul apartment and doesn’t recall how she got there, although the contents of her camera might. A cross-cultural, time-shifting journey ensues as Mia pieces together the details of her past and wrestles with the costs of her profession. Unseen welcomes Mansour back to DC, following Mosaic’s acclaimed 2018 production of the writer’s The Vagrant Trilogy, which will premiere Off-Broadway at the Public Theater this spring.

A testament to Artistic Director Reginald L. Douglas’s long-standing commitment to new play development, the Catalyst Series will connect all of Mosaic’s new work activities, including the launch of Mosaic’s first-ever new play festival in January 2023. Throughout the year, the company will also produce two workshop productions, offer playwriting workshops for youth and seniors and a playwriting contest for high school students, curate a series of live and digital symposiums on pressing issues of today, host residencies for local and national playwrights at national new play incubators, and collaborate with the Embassy of Spain’s Cultural Office to establish an innovative cross-cultural Artist-in-Residence program.

Inspired by the thousands of enslaved people in the United States who sought freedom in Mexico rather than looking north, Mexodus uses live looping and hip-hop to explore an under-told chapter of the Underground Railroad and celebrate Black and Brown bodies standing together against oppression.

Join Mosaic for the public presentations of three works-in-progress by local and national writers intentionally performed by local talent, allowing for unique collaborations between DC and national artists and audiences. Featuring readings, playwriting workshops, and panels with award-winning artists, the inaugural Catalyst New Play Festival will take place at venues across Washington DC and ushers in a new chapter of Mosaic’s commitment to connecting DMV audiences from all neighborhoods with thought-provoking new work at all stages of development.

Murdered Men Do Bleed and Drip by Jennifer Barclay and Hannah Khalil
Workshop Production of New Play in Development
Produced in partnership with DC’s Solas Nua and Dublin-based Fishamble
April 28 – May 7, 2023

Inspired by the forced distancing of the pandemic, this imaginative new play by Irish American playwright Jennifer Barclay and Irish Palestinian playwright Hannah Khalil affirms the strength of women of all nationalities and the universal need for connection. Written by the artists while living half a world apart, Murdered Men Do Bleed and Drip spans continents and mediums, with the play’s action taking place simultaneously in two countries during a global live performance–meets–digital theater event made specifically for this moment.

A celebration of Mosaic’s H Street NE home neighborhood, the H Street Oral History Project ignites Mosaic’s mission of using theater as a tool for community building. Under the visionary leadership of Mosaic’s Andrew W. Mellon playwright-in-residence Psalmayene 24, local Black playwrights Lady Dane Figueroa Edidi, Gethsemane Herron-Coward, and J.J. Johnson will interview H Street residents past and present about living in the changing, historic neighborhood, and work with dramaturg Jordan Ealey to create original plays inspired by their conversations. These interviews will then be archived at the DC Public Library, allowing the stories of our community to be put into the canon of our city culture forever.

An additional production will round out the season in the spring of 2023 and will be announced at a later date.

ABOUT THE MOSAIC THEATER COMPANY OF DC

produces bold, culturally diverse theater that illuminates critical issues, elevates fresh voices, and sparks connection among communities throughout our region and beyond.

Under the leadership of Artistic Director Reginald L. Douglas and Managing Director Serge Seiden, Mosaic produces plays that spark conversation and connections among the DC Metro area’s diverse communities and sees itself as a neighbor and partner with those communities. By sharing stories that both entertain and enlighten, Mosaic uses art to build empathy among diverse people united by the magic of theater and hopes to build community by reflecting the people and the many cultures that call DC home.

The Till Trilogy is made possible by extraordinary support from The Roy Cockrum Foundation with additional support from the National Endowment for the Arts and the CrossCurrents Foundation, and welcomes Bryan Joseph Lee and CNTR Arts as Mosaic’s new strategic consulting and community engagement partner.

Murdered Men Do Bleed and Drip is made possible by support from Mosaic’s Trish Vradenburg New Play Commission Program.

SEE ALSO:
Reginald L. Douglas on the next chapter at Mosaic Theater (interview by Ramona Harper)
‘The Till Trilogy’ at Mosaic Theater Company (John Stoltenberg’s column on concert readings of the three plays in summer 2018)