I passed a German man dressed in an antiquated military uniform as I walked through the gates of Dachau.

I was a 21-year-old junior in college spending a semester in France visiting friends in Germany. He was paying his respects to the camp’s hallowed grounds.

The large camp was barren. Most of the barracks had been destroyed. Only two remained for people to see: one for men and one for women.

The informational center offered large panels describing what occurred there. They were written in French and German; the information was shared but not broadly with an English translation.

I recall a sign at the crematories stating that they had never been used. Something I later learned was not true.

On that bright, beautiful, sunny day all I could think of were the souls that haunted those grounds.

SHOAH introduced some of them to me. 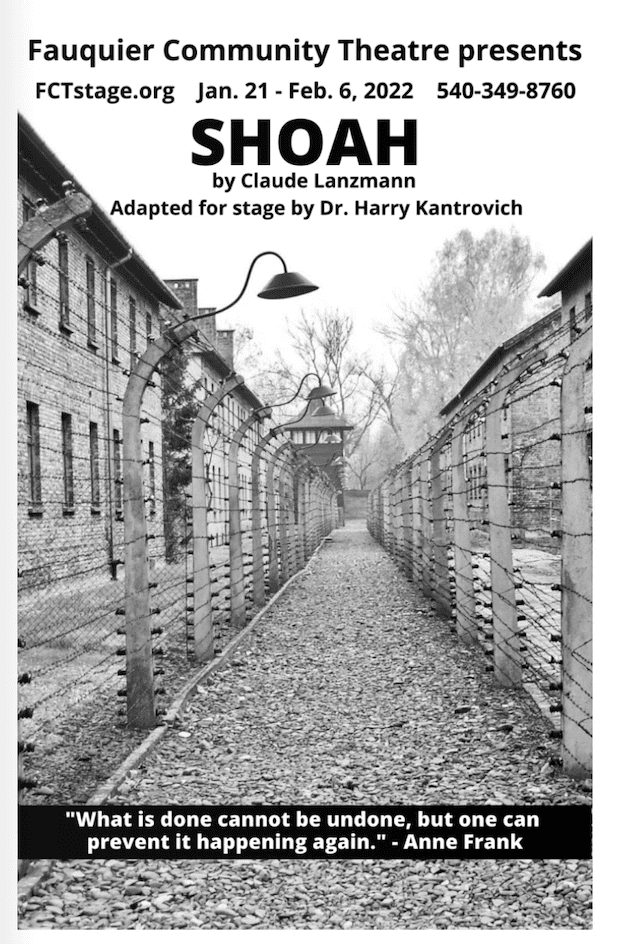 SHOAH, by Claude Lanzmann and adapted for the stage by Dr. Harry J, Kantrovich, is a Holocaust documentary 11 years in the making. Lanzmann conducted interviews dividing Holocaust witnesses into three categories: survivors, bystanders, and perpetrators.

Fauquier Community Theatre presented this world-premiere for eight performances from January 21 to February 6, 2022, at Vint Hill Farm Station, a former United States Army and National Security Agency. The World War II setting of the theater was an interesting backdrop for this play.

The plain set of SHOAH accentuated the complicated nature of the play’s subject with its understated simplicity. A projection screen and vintage work desk were the only two set pieces.

Actors filed on and off stage during six scenes that depicted scenarios from different locations during the war: Chelmo, Auschwitz/Birkenau, Sobibor/Vilna Ghetto, Treblinka, Berlin, and Warsaw.

The actors portrayed actual people who experienced the tragedies of the war. Many of them were concentration camp victims; others included the wife of a Nazi schoolteacher, Head of Reich Railway, railway workers, Nazi Commission of the Warsaw Ghetto, among others. Through research, some actors were able to find their victim’s camp entry number to write on their arm.

The 23 actors stood silently on the side of the stage until it was time to tell their experiences.

Then each actor walked into the spotlight at center stage, wearing forlorn expressions, and gazed into the distance to recall memories from the person they portrayed. The audience sat silent, captivated by every word.

Actor Peter Marsh portrayed 13-year-old Chelmo camp survivor Simon Srenik. Srenik was responsible for burying bodies retrieved from the gas chambers. While he recounted his experiences, I turned to look at my 13-year-old son, who sat beside me in the theater. I could not imagine any boy his age experiencing what Srenik had and having the courage to live and retell it.

French filmmaker Claude Lanzmann, portrayed by actor Michael Clendenin, left his desk several times for interviews, taking a gentle and careful tone with survivors and a more accusatory one with perpetrators, such as Dr. Franz Grassler, Nazi Commissioner of the Warsaw Ghetto, played by actor Richard Fiske. Lanzmann found it inconceivable that Grassler was never aware of what was happening to the residents of the Ghetto. This exchange with Grassler was the most heated of the play. All other reminiscences by victim portrayals were melancholic, somber, and filled with sorrow.

During Sobibor railway worker Jan Piwonski’s retelling, played by Terry Krebs, recordings from a railway could be discerned in the background. Throughout the play were woven musical scores composed by Holocaust ghetto and camp victims. The authors’ names, long lost to history, only built onto the magnitude of the victims lost during war, who took the last road to one of the camps.

“The music ties SHOAH scenes or vignettes together. It is like having another actor on the stage (along with the designated projections for each vignette). This music was written by the Jews who were imprisoned in the death camps and ghettos. For those that never made it out alive, the music is their gift, their legacy to the world,” said Kantrovich, SHOAH director.

Music director Matthew Scarborough arranged transcriptions of “Songs of the Ghettoes and Concentration Camps” and cellist Logan Madrid and violinist Kathy Mullen Jackson performed the moving music. During musical sets, archival footage from the camps and ghettos was projected onto the stage screen.

The theater adaptation of SHOAH brought to the stage a fact-finding mission to uncover first-hand accounts of the atrocities that took place during WWII. From train rides to resettlement camps to delousing instructions, haircuts, gas chambers, and clean-up detail, the actors delivered accounts made by the individuals they portrayed.

Associating with the survivors’ identities enabled the audience to better connect with each victim. The accents, gestures, and tears from the actors evoked strong emotions. Audience members gasped as details emerged, such as the unloading of a deep common grave of bodies, only to have the survivor come upon the remains of his family members.

Actors never broke character or abandoned their accents. Actor Michael Clendenin, portraying Claude Lanzmann, blended French words with English throughout his survivor interviews. Actors engaged with the audience and pointed when referencing how prisoners were chosen, “and you.”

I found myself during some testimonies leaning forward to ask a question of one of the victims, realizing moments later that it wasn’t a presentation open to Q&A.

At front of house, the director learned that some audience members were they because of family they had lost in the war.

Dr. Larry Finkel portrayed Richard Glazar, a Treblinka survivor. Finkel learned that Glazar was a 22-year-old Czech-Jewish inmate. In August 1943, 200 prisoners revolted, including Glazar. He was one of only 100 prisoners to survive the escape. Glazar grew to become an economics professor. He married and had a family. Overcome by survivors’ guilt, he committed suicide on December 20, 1997, jumping out of a window in Prague.

“It has been an honor and a privilege to be cast and performing in this show. Honoring the memories of those who died and theatrically relaying the words, memories, and emotions of the survivors has been a challenging, broadening, and profoundly moving experience. As a Jew with distant relatives who died in the Holocaust, it is deeply personal. As the years go by and survivors dwindle to a precious few, we must never forget the evil perpetrated and the darkest sides of humanity that can surface if allowed and tolerated and abetted. All of this happened just 80 years ago. We must learn from history and never allow this to happen again. It will if we are not both educated and vigilant.” — Larry Finkel

Overwhelmed with the countless acts of inhumanity he witnessed daily, he chose to end his life and walk with prisoners into the gas chambers. While in the chamber, a girl he knew told him that ending his life was pointless. That he must bear witness to the brutality of their last hours and become a living witness of the Holocaust.

SHOAH embodies the voices of a dwindling generation that experienced the worst that mankind has ever displayed. While SHOAH finished its eight performances last month, it is an example of the impact that community theater can have in presenting stage adaptations from documentaries and historical events, especially the tragedies of the Holocaust lest we forget.

“I was originally to direct a musical for FCT (which is not my forté). I proposed SHOAH to Sheryl Solow and the Artistic Committee and spoke with Executive Director Debra Smyers, who brought it to the board. The next thing I knew, my dream was becoming a reality after being turned down by other theaters. I did in all honesty have a couple of Equity theaters who wanted to premiere SHOAH, but having started in community theater, a community theater deserves my loyalty, and FCT is that community theater. They will also be premiering my next production sometime in 2023, which is in collaboration with Mr. Tom Brokaw, The Greatest Generation Speaks,” said Kantrovich.

SHOAH is being planned to continue at Fauquier Community Theatre, next in a streaming platform on Holocaust Remembrance Days throughout the year. Founded in 1978, Fauquier Community Theatre enriches and entertains a range of audiences through a variety of live theater productions that enhance the cultural life of the community. The theater offers a range of challenging creative opportunities that inspire people of all ages and backgrounds to participate in theater. More information can be found at FCTstage.org.

Aimée O’Grady is a freelance writer with articles in The Fauquier Times, Piedmont Lifestyle, and Brookside Neighbors to name a few. The French and Art History undergrad pursued a master’s degree with a focus on Writing. She supports the arts as a volunteer, writer, and mother of four children, each enrolled in an art. Aimée believes that storytelling weaves parallels among people and enables them to see commonalities and have a better appreciation for experiences outside of their circles.