As part of what founder/artistic director S. Robert Morgan describes as “an incubator for new plays,” The Essential Theatre is running a play-reading series intended to develop each entry through a number of readings over three years.

Two recorded workshop readings in this series are currently streaming online. In keeping with the current season of Lent, both have religious themes, and are collectively known as The Faith Play Project. These two plays, read by strong and compelling casts, explore the intersection of faith with some of humanity’s darkest and most desperate moments.

A Matter of Faith
Written by La’Chris Jordan
Directed by S. Robert Morgan 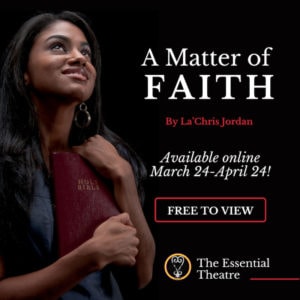 In this play, faith is a force that both binds and divides, tearing people apart at some moments and sparking the most unlikely alliances at others. Faith Morgan (Gayle Carney) is a Jehovah’s Witness, a member of a faith that, we’re frequently reminded, has several key differences from mainstream Christianity. Faith and her sister, Dinah (Kelli Sontas DeJesus), don’t celebrate Christmas, they refer to God as Jehovah, they attend Kingdom Hall instead of church, and they believe that the Bible forbids blood transfusions.

It’s on this last point that the whole story turns, as Faith discovers that her leukemia, in remission for four years, has attacked again. Her rock-solid determination to avoid a transfusion, even at the possible cost of her life, shakes the foundations of her family. Husband Sam (LaJuan Martin) and son Michael (Derrick Hardy, Jr.) fight hard to change her mind, while Dinah finds herself siding first with Faith and then against her. Dinah’s daughter, Domonique (Gifty Amponsem), has left her faith far behind her, but nevertheless argues that Faith has the right to make her own decision, while Brother Don Hayes (Matthew A. Castleman), an elder at the Kingdom Hall, keeps showing up to insist that Faith adhere to doctrine.

Nothing is ever quite as simple as it seems, and revelations throughout the course of the play bring out the complications in everyone’s belief system and behavior. Sam was disfellowshipped, or excommunicated, after the death of his best friend caused him to start questioning everything. And something is going on between Dinah and Don that calls into question their devoutness. Even Faith herself, at the beginning of the play, has given in to the temptation to throw herself a lavish birthday party, something that members of her religion are not supposed to do—and something she long ago prevented her son from doing, shoring up her own belief but getting her child’s faith off to a rough start.

At the heart of the play are two genuinely loving and sincere relationships: Faith’s marriage to Sam, and her relationship with Jehovah. It is these relationships that shape her thinking, inspire her actions, and will determine her fate. However she might test the boundaries of her faith, it means everything to her, inspiring her to both fervent obedience and loving compassion. At a life-or-death moment, she trusts that faith wholly, and Sam must decide if he in turn trusts her.

The tensions among love, faith, shame, disapproval, and misunderstanding make A Matter of Faith a riveting experience, and if the central conflict ultimately resolves itself a little too tidily, lingering questions at the end effectively remind us that, however weighty our own choices appear, they may not have the final word after all.

A Field of Thorns
Written by John Becker
Directed by S. Robert Morgan 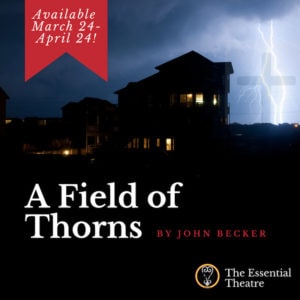 Evelin Hart (Edie Backman) wants nothing more than a pleasant, “Dr. Phil” kind of evening for her family. Instead, she, her husband, Charles (Jim Epstein), and their two children are engaged in a heated argument over dinner, when the lights flicker and suddenly a stranger calling himself Mr. Immanuel (Derrick Hardy, Jr.) is in their midst.

While A Matter of Faith was about a Black family with a white friend, Brother Hayes, John Becker’s A Field of Thorns deals with an inverse situation, a white family with a Black friend. Or maybe friend isn’t quite the right word in either case. If Brother Hayes got less than a warm welcome from Sam in the previous play, it’s nothing to the horrified reception that Mr. Immanuel receives from the Harts in this one.

There’s nothing here of the warmth of the family in A Matter of Faith, whose love for each other came through even as they were fighting. This family is brittle, abrasive, and clearly mired in grief over a third child, Matthew, who is no longer with them. Evelin tries to numb herself with nostalgia and alcohol while Charles blusters and condescends, and daughter Alicia (Mary Rodrigues), a philosophy major, doesn’t try to hide her contempt for either of them. Meanwhile, young son Aeron (Sophia Colón Roosevelt) appears lost in a world of his own, prone to bouts of singing and rocking while the others shout.

It’s no wonder that Mr. Immanuel announces that he’s been sent to save them. But why, or how, not even he seems to know for sure.

Mr. Immanuel is one of those mysterious figures, often seen in literary works, who claim divinity but whose identity we’re never quite clear about. One moment he’s quite openly calling himself the son of God; the next moment he’s describing a childhood and youth in the slums, where he was inveigled into drug dealing and worse. His intimate knowledge of the Harts’ secrets argues for the truth of his claims, but other factors undermine them.

On the whole, I feel the character could be used a little more effectively here; rather than his interactions with the family building to a climax, their conversations seem to go in circles, punctuated by moments of drama involving a gun Charles keeps in a drawer. Still, Mr. Immanuel forces them all to take the first steps toward facing their own grief and rediscovering their love for each other, leading to a resolution that, if incomplete, is still touching.

The Faith Play Project streams for free online from March 24 through April 24, 2022, Thursdays through Sundays, in rotating repertory. All viewers must RSVP at theessentialtheatre.org.

Playwright bios, cast photos, and playbills for both plays are online here.