One’s mind can easily wander wondering what the rhinos mean.

In Ionesco’s 1950 absurdist dark comedy, Rhinocéros, set in a small French town, the titular pachyderms start showing up and stampeding about, first one then another, eventually becoming a thundering herd. The townsfolk are terrified yet fascinated, and one by one they succumb to group-think and turn into rhinos themselves. When written, the play was an allegory about gullibility to Fascism and Nazism before and during World War II. Pointless Theatre has just opened an intermittently diverting production of it with a new translation and direction by Frank Labovitz, and the experience of watching it prompts a provocative question: Just who are the rhinoceroses of today?

There’s plenty of time during the play to muse on that. Ionesco’s script is structured around multiple topics in a series of less-than-scintillating scenes separated by extremely loud and arresting incidents of rhino invasion — signaled in the Pointless production by eyepopping lighting (Hailey Laroe), pounding sound (Aj Johnson), and ingenious puppets (Jess Rassp). The rhino interludes are done so fun one looks forward to them. The rhino sound design alone is so artful — earth-shaking stomps, impact crashes, trumpeting and roaring, horns and even a sax — that it almost becomes another character. And the masked rhino ensemble sequence at the top of Act Two is a reward worth returning from intermission for.

Following a lovely pre-show soundtrack of Edith Piaf, the first scene is set in a quaint French café (designed by James Raymond), peopled by patrons, passersby, and staff in colorful cartoonlike costumes (Kitt Crescenzo). Here we meet the play’s main character, a man named Berenger (Mary Myers). He’s joined by his snide friend Jean (James Raymond), who berates Beringer for being disheveled, drunk, weak-willed, and a disgrace. Berenger does not disagree, but in his own defense tells how uncomfortable he is with his brain-dulling, burdensome life.

Berenger’s character arc during the play is what holds it together — he begins as a hot mess and in the end transforms into a quasi-hero — so the choice to cross-gender-cast the crucial role does not escape attention. In fact, the character becomes increasingly interesting in Myers’s quick-witted performance, which remains appealing and sympathetic throughout.

A scene looking at the office work world that numbs Berenger comes next. It is interrupted by the offstage crash of a rhino’s demolition of the stairway, which forces the terrified coworkers to escape via the window down a fire-department ladder.

When Berenger visits Jean’s home to check in on him, he finds a troubling sight: Jean’s skin is turning green and a bump has begun on his forehead. The scene requires Jean to become a rhino before our eyes, and Stephen Murray’s virtuosic performance of the transformation — braying, charging, roaring, snorting, scaring the daylights out of Berenger — is among the show’s acting highlights. A later scene in Berenger’s home provides an opposite but equally outstanding acting performance as we see him terrified that he too is changing into a rhino and desperately trying not to.

There is a nonsensical, scattershot, alogical tenor to much of Ionesco’s script, which Labovitz’s translation preserves; it’s chock-full of intentional repetition, cliches, and a persistent inconsequentiality that contrasts sharply with the ominous chaos gathering outside. Meanwhile, Berenger, wrestling with all that’s going on, comes to confront who he is and who he should be in the test of character posed by the social breakdown. His urgent final monolog is an aria of individual moral courage. “I will not capitulate!” are his ringing last words.

So who are the rhinoceroses today? One obvious answer is all the Trumpian proponents of alt-right Q-Anon MAGA white nationalism, who evidence exactly the “collective psychosis” the script refers to. A tougher question, though, is this: Who will stand up to them? And what does the requisite moral courage look like?

There’s a lightheartedness in Ionesco’s play; despite the gravity of its allegory, the script is not at all a tract. In fact, it often winks, as when in the first scene the playwright includes a wry plug for himself. The Labovitz translation follows suit with its own clever product placement:

JEAN: Instead of spending all your available money on drink, isn’t it better to buy theater tickets and see an interesting play? Have you seen the work of Pointless Theatre Company?

BERENGER: No Alas! I’ve only heard about them….

JEAN: There’s a show going on right now. Enjoy it. 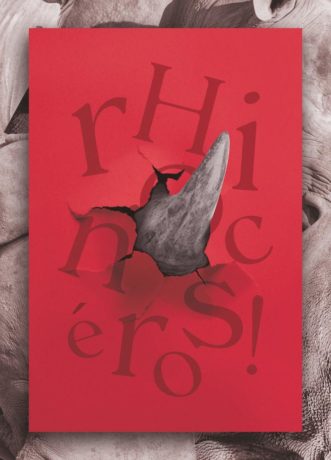 COVID Safety: Proof of full vaccination is required for entry. Masks are required when not eating or drinking. Pointless Theatre’s ticket policies and COVID protocols are here.

The Rhinocéros! program is online here.