Whether you finished high school recently or decades ago, the touring production of Mean Girls, now playing at the Kennedy Center, will beam you right back into the most angst-worthy and glorious moments of your adolescence. Get ready for a rollicking trip down memory lane!

Cady Heron arrives at Chicago’s North Shore High School straight from Kenya, where she passed an idyllic, home-schooled childhood surrounded by majestic wildlife and under starry skies. At North Shore, the naïve teen encounters a landscape filled with more danger than she ever encountered in lion country. Fellow students Janis Sarkisian, a punk artist, and the flamboyant Damian Hubbard take Cady under their wings, offering her an annotated road map through the school’s numerous cliques. None are more toxic than The Plastics, an over-the-top trio of snotty girls led by the tyrannical queen bee Regina George. Cady must maneuver treacherous terrain, tumbling into serious sinkholes of social distress before triumphing with her personhood intact. 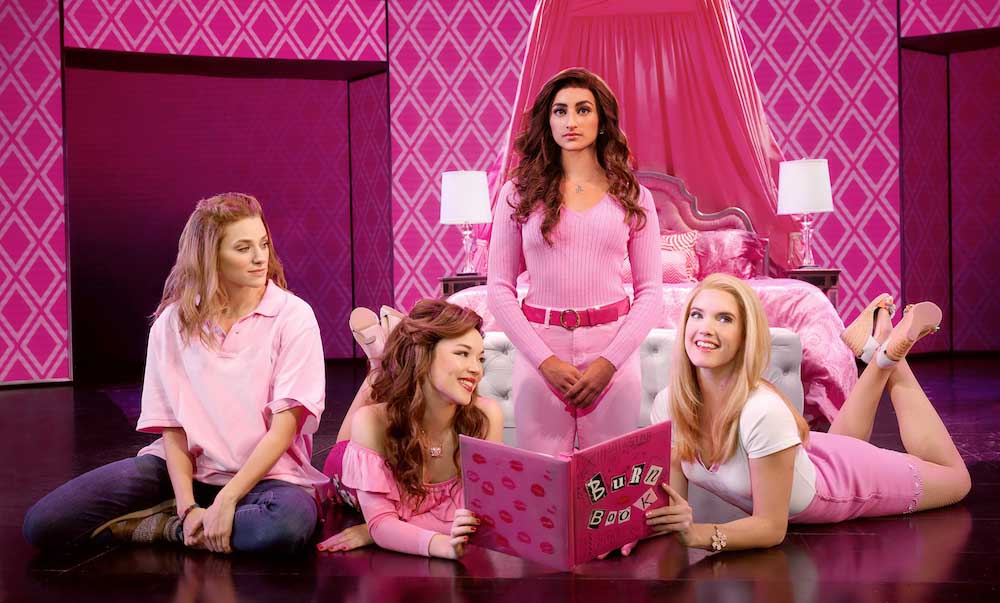 While full of predicable plot turns and familiar stereotypes — think nerds, jocks, goths, stoners, fashionistas, and garden-variety wannabes — Mean Girls nonetheless dazzles with stellar singing, great choreography, and, best of all, amazing lighting by Kenneth Posner and state-of-the-art video design by technical wizards Finn Ross and Adam Young. In the blink of an eye, their slick digital imaging transforms a series of blank backdrops from the scenic African savannah into a classroom, a slinky Halloween party, an entire shopping mall, and much more. Watch with horror and fascination as the screens blossom like lethal algae with pages from the Burn Book, a collection of bitchy stories, rumors, and gossip by and about the school’s female (and some male) students.

Bathed in candy-color light, the eye-popping stage is perfectly matched by Gregg Barnes’s hilariously over-sexed costumes, a whirl of short skirts, skin-tight pants, tiny tops, and fabulous footwear. His Halloween concoctions, especially, take Playboy bunny–like kitsch to a new level. Directed and choreographed by Casey Nicholaw, the production becomes a kaleidoscopic mash-up of bright color and sound animated by the loose-limbed athleticism of its first-rate dancers.

Composer Jeff Richmond and lyricist Nell Benjamin keep the plot moving smartly with nearly 20 catchy songs. “A Cautionary Tale,” sung by Janis and Damian, sets the stage for Cady’s journey from naivete to self-assurance. “Where do you Belong,” a terrific production number, introduces us to the school’s population with a show-stopping dance routine. In “Stop,” another very funny ensemble effort, students confess some of their worst indiscretions and urge us to keep our destructive impulses in check. In the searing “Meet the Plastics,” told from multiple points of view, Regina informs her schoolmates that she is “the prettiest poison you’ve ever seen.” The sweet “Stupid with Love,” sung by Cady and the ensemble, reminds us that playing dumb is ultimately self-defeating.

While short on self-reflective ballads, Gretchen, Regina’s second in command, poses a fundamental question that underlies all the characters’ surface brio. “What’s Wrong with Me?” talks to the social costs of wanting to fit in, and the fear of being left on the sidelines. You may not leave the theater humming an unforgettable tune, but the score provides an effective empathetic bridge between us and the hormonally-charged teens on stage.

One of the greatest strengths of this production is the uniform excellence of the cast. Every one of them pulls their weight and then some. Eric Huffman as the prancing Damian Hubbard combines wit with wisdom as the narrator whom Janis calls “almost too gay to function.” Mary Kate Morrissey expertly navigates the complicated role of Janis, whose sexual identity has caused her to be rejected by the Plastics. Nadina Hassan nails the role of the red-hot Regina George with flinty hauteur, and Megan Masako Haley as Gretchen Wieners grabs hold of us with her uber-clinginess and chasm of self-doubt. April Josephine does triple duty as the show’s only adult female characters, including the level-headed (and acerbically funny) Ms. Norbury, a long-suffering teacher. One only wishes that every word this talented cast intoned could be heard over the lively music.

Mean Girls was inspired in part by Queen Bees and Wannabes, Rosalind Wiseman’s 2002 nonfiction self-help book chronicling the damaging effects of high school cliques and bullying. The satiric genius Tina Fey mined Wiseman’s material, added her own reminiscences, and recast it as a hugely popular comedic 2004 film. The musical version, updated by Fey with the heady dose of social media ploys, premiered right here in Washington, DC, in 2017 at the National Theater before a successful run on Broadway. Now the musical itself is being remade into a film. While the technologies teens use to torture each other continue to proliferate, the underlying stories of friends and frenemies, loyalty and betrayal, hilarity and stinging sadness that animate our high school selves are seemingly evergreen.

COVID Safety: Proof of full vaccination against COVID-19 is required to attend all indoor performances and events at the Kennedy Center. All patrons over the age of 2 must wear a mask during the performance. Kennedy Center’s complete COVID Safety Plan is here.