Inspired by Thornton Wilder’s The Long Christmas Dinner of 1931 – a 35-minute one-act play tracing five generations through a fast-moving 90 years of Yuletide meals in the family dining room – playwright Noah Haidle’s Birthday Candles, making its COVID-delayed Broadway debut with Roundabout Theatre Company, offers yet another reminder of Virgil’s ancient maxim “tempus fugit” (“time flies”). But here, 90 years in the life of one Michigan woman, from her seventeenth to her 107th birthday, drag on over 90 minutes in her kitchen, while she bakes, but never completes, serves, or enjoys, the metaphorical cake across the decades (and on stage in real time), in this belabored look at transience, mortality, and cycles of existence.

The show opens with the young Ernestine Ashworth pondering the existentialist questions, “Have I wasted my life? . . . In the career of my soul, how many times have I turned from wonder? . . . 250 babies are born every second . . . In another week, two and a half million. How am I supposed to reconcile my individual existence against the weight of those numbers?” Pretty heady stuff for an ordinary seventeen-year-old in Grand Rapids.

Bogged down by such contrived writing, Haidle’s problematic script ponders philosophical issues of life, creation, and the universe that don’t fit the personalities, ages, or circumstances of his characters. Consequently, what may be intended as funny, thought-provoking, poignant, or defining instead sounds simply unbelievably uncharacteristic and results in unnatural (and frequently stumbling) deliveries by the cast, ranging from stiff to recitative, under the direction of Vivienne Benesch. And several of those improbable poetic passages are stuck in a pattern of unnecessary redundancy, repeated from generation to generation to establish the cyclical connections within a family that never truly explores their meaning, for nine irregularly paced decades, in 90 minutes that, instead of flying by, felt like an eternity to me, with scenes that never hit their intended heights of comedy or depths of profundity.

Emmy Award winner Debra Messing (Will & Grace) stars as Ernestine, who declares at the start, “I am a rebel against the universe. I will wage war with the everyday.” Spoiler alert: she doesn’t. To the contrary, we watch her take the typical old-fashioned path of dating, marrying, having two children, then grandchildren and greatgrandchildren, losing family members, divorcing her cheating husband, and, late in life, marrying the guy next door, who has loved her since childhood – and gifted her with a goldfish (subsequently replaced by another 100+) named Atman, a “Sanskrit word for self. But not a personal self, but as the divinity within yourself,” as he tells her at eighteen – all the while in her kitchen. Her aging process is portrayed without the aid of wigs or make-up, through changes in energy level, posture, movement, and speech. It’s a performance filled with sit-com-style humor and cloying sentimentality that never convinces at any of the many ages she portrays (including channeling Katherine Hepburn and, at times, oddly adopting a faux-English accent for her elderly years).

The supporting cast of five (Enrico Colantoni, John Earl Jelks, Crystal Finn, Susannah Flood, and Brandon J. Pierce, subbing for Christopher Livingston on the date I attended), four of whom play multiple roles that span the generations, also wobble between attempts at over-the-top comedy and tear-jerking profundity, and given the material, rarely succeed at either. They also have the inherent problem of not looking the range of ages they portray. The most noteworthy performances were by the excellent understudy Pierce, in commendably controlled and empathetic portrayals of her son Billy and John, the next owner of her house, who shows Ernestine understanding and concern; and Crystal Finn as Billy’s anxiety-ridden fiancée, then wife, Joan, who delivers the laughs with her high-strung outbursts and self-admonishing “Joan, Joan, Joan.”

Costumes by Toni-Leslie James, hair and wigs by Matthew B. Armentrout, and makeup Kirk Cambridge-Del Pesche give an everyday look to the mundane characters. Interstitial sound by John Gromada and original music by Kate Hopgood signal shifts in time, and the set by Christine Jones, with lighting Jen Schriever, contrasts the earthly setting of the kitchen with the cosmic themes of the show’s reiterated philosophizing.

While there are some worthwhile ideas in Birthday Candles, they suffer from a lack of subtlety and refinement. It’s a production that just didn’t work for me. 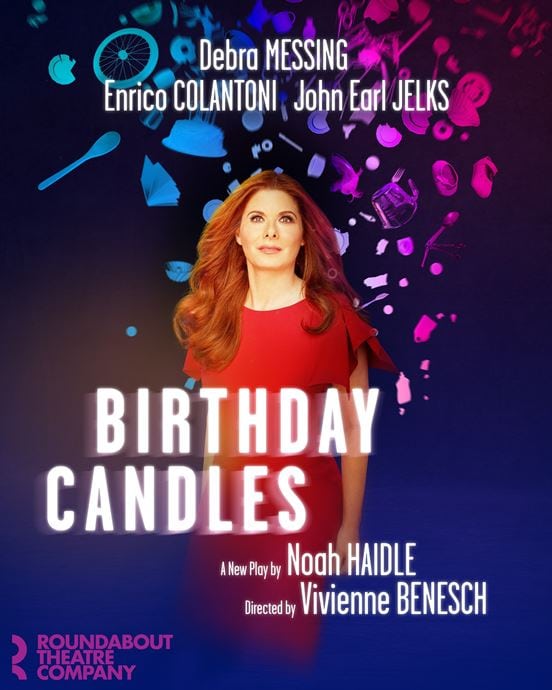 Birthday Candles plays through Sunday, May 29, 2022, at Roundabout Theatre Company, performing at American Airlines Theatre, 277 West 42nd Street, NYC. For tickets (priced at $39-250), go online. Everyone must show proof of COVID-19 vaccination to enter the building and must wear a mask at all times when inside.