American Shakespeare Center (ASC) continues its 2022 season with a summer slate of plays that explore the connections between Shakespeare classics and contemporary theater. Added to the list of previously announced titles will be Antoinette Nwandu’s groundbreaking drama Pass Over, which thrilled audiences on Broadway in the summer of 2021. The New York Times called Pass Over “blazingly theatrical and thrillingly tense,” and Variety praised the play, calling it “surreal and morbidly funny. Nwandu’s theatrical idiom — the heartsick poetry of profanity applied to the raging anger of deep existential pain — is its own kind of beautiful. This playwright’s voice can be a joy to hear, and her language is often blistering.” 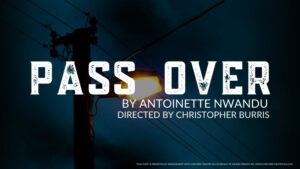 In Pass Over, Moses and Kitch hang out on the corner — talking trash, passing the time, and hoping that maybe today will be different. As they dream of their promised land, a stranger wanders into their space and derails their plans. Emotional and lyrical, Pass Over crafts everyday profanities into poetic and humorous riffs, exposing the unquestionable human spirit of young Black men looking for a way out.

“What is so beautiful about this play is how it is in conversation with ASC’s mission and our love of language,” said ASC Artistic Director Brandon Carter. “Pass Over’s relationship with Samuel Beckett’s existential drama Waiting for Godot and the Exodus story from the Bible places this contemporary masterwork among classic texts, while Nwandu’s poetry and rich characters will give us a glimpse of the social and psychological effects of being Black in America.” Carter will play the character of Kitch, returning ASC company members KP Powell will portray Moses, and James Keegan will play the parts of Mister and Ossifer. The ASC production of Pass Over will be directed by Christopher Burris.

Every Brilliant Thing, by Duncan MacMillan, with Jonny Donahoe, May 27–July 3, 2022 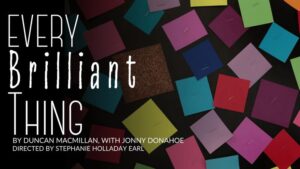 Thematically connected with ASC’s spring production of Romeo and Juliet (onstage through May 14), this “heart-wrenching, hilarious play” (The Guardian, UK) explores depression and the lengths we will go to for those we love. You’re drawn into the story as the audience is invited to contribute to the list of every brilliant thing that makes life worth living. Every Brilliant Thing marks the welcome return of ASC veteran director Stephanie Holladay Earl and longtime company member Ginna Hoben as the Storyteller. 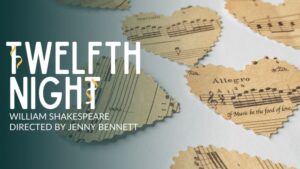 Sea-tossed siblings set out for adventure in this laugh-out-loud look at gender, love, and longing. One of Shakespeare’s most joyous rom-coms, Twelfth Night weaves a tangled web of love: Viola is in love with Orsino…who is in love with Olivia…who is in love with Cesario…who is secretly Viola disguised as a man. Jenny Bennett directs this summer frolic. 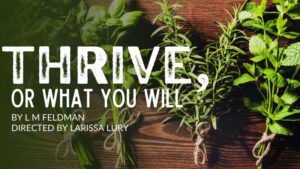 In this epic tale about the first woman to circumnavigate the globe, gender-nonconforming 18th-century herb woman Jeanne Baret sets out on an 11-year voyage across lands and seas. A funny, gripping, and inventive theatrical journey, Thrive sparks a cross-centuries conversation with Shakespeare’s Twelfth Night about exploration, love, and identity. Performed in rep by the company of Twelfth Night and directed by Larissa Lury. Thrive was recently short-listed for the Lambda Literary Prize for LGBTQ Drama. Larissa Lury will direct the ASC production.

Thrive was selected as the 2020 winner of ASC’s Shakespeare’s New Contemporaries project, which seeks to discover, develop, and produce new works that are inspired by or in conversation with each of the plays in Shakespeare’s canon.

Running in repertory, both Twelfth Night and Thrive, Or What You Will feature the same cast of six actors, each taking multiple roles, in keeping with Shakespearean staging practices: Jasmine Eileen Coles, Annie Fang, Jihan Haddad, Marcel Mascaro, Meg Rodgers, and Eli Lynn.

Tickets for Every Brilliant Thing, Twelfth Night, Thrive, Or What You Will, and Pass Over are on sale now. Tickets can be purchased online or by calling 1.877.MUCH.ADO (1.877.682.4236). All performances are at the Blackfriars Playhouse, 10 South Market Street, Staunton, VA.

About the American Shakespeare Center

The American Shakespeare Center recovers the joys and accessibility of Shakespeare’s theater, language, and humanity by exploring the English Renaissance stage and its practices through performance and education. Year-round in Staunton’s Blackfriars Playhouse — the world’s only re-creation of Shakespeare’s indoor theater — ASC’s innovative programming and “shamelessly entertaining” (The Washington Post) productions have shared the delights of Shakespeare, modern classics, and new plays with millions over the past 30 years. Beyond the Playhouse, ASC is a hub for Shakespeare education and scholarship and has a long history of touring nationally from Texas to Maine — currently on hiatus due to COVID. Founded in 1988 as Shenandoah Shakespeare Express, the organization became the American Shakespeare Center in 2005 and can be found online at americanshakespearecenter.com and on Facebook, Instagram, and Twitter. ASC programming is sponsored in part by the Community Foundation of the Central Blue Ridge, The Shubert Foundation, the Virginia Commission for the Arts, the Mary Morton Parsons Foundation, the Krongard Foundation, and the generosity of countless donors.