The mood is manic, with the White House in a state of panic, as a coterie of frantic females tries to deal with the PR nightmare that is the President, but creates an even bigger nightmare of their own, in the world-premiere production of POTUS: Or, Behind Every Great Dumbass Are Seven Women Trying To Keep Him Alive, a female-centric political farce by LA-based writer Selina Fillinger, now playing a limited engagement at Broadway’s Shubert Theatre.

Directed with non-stop frenetic energy by five-time Tony Award winner Susan Stroman, the riotous show is filled with over-the-top stereotypes, politically incorrect laughs, and hysterical physical comedy, delivered by an all-star all-women cast of favorites from the stage and screen, whose characters weave a web of spins and cover-ups that leave world peace, a feminist contingency of voters, and their own positions and sanity hanging in the balance. It’s a decidedly exaggerated yet all-too-familiar look at the entitlements and abuses of the American presidency that depicts women behaving just as badly in the service of a powerful man – until they come together, recognize the true meaning of the popular internet acronym FML, and ask each other the eternal question, “Why aren’t YOU President?”

A terrific cast lets loose with the parodic portrayals, foul-mouthed tirades, and sexual explicitness, hurling incessant insults and every misogynist epithet known to man at one another, while protecting, gratifying, and kowtowing to the (sort of unseen) commander-in-chief, or gleaning and exposing the truth about him, all for their own personal and professional gain, in characters that suggest composites of well-known public figures of our recent and current times.

Tony Award winner Julie White as Harriet, the White House Chief-of-Staff, is a whirlwind of sidesplitting rage, barking orders and shouting obscenities as she is faced with how to handle the scandal(s) and what to tell the Press Secretary Jean – played with equal concern but greater deadpan control by Suzy Nakamura in her noteworthy Broadway debut – as she’s about to face questions from a roomful of reporters. Among the most probing is Tony Award nominee Lilli Cooper as Chris, a tenacious member of the press and a nursing mother, determined to get the big story, no matter what it takes, while pumping her breast milk, getting incoming calls on her unsilenced cell phone (oops!), and causing yet another major presidential crisis with the marble bust of a revered Suffragette (a witty reference to the farcical perversion of the early feminist movement).

Add to them the smart but insecure assistant Stephanie, played to comedic perfection by SNL regular Rachel Dratch in an uproarious Broadway debut; SAG Award winner Lea DeLaria as the brash drug-dealing Bernadette, Jean’s ex and the President’s sister, released from prison and there to receive a pardon from her brother for her conviction; Grammy, Emmy, and Tony Award nominee Vanessa Williams as the strong and in-charge First Lady Margaret, willing to maintain the appearance of charm, commitment to public service, and a stable marriage to retain her popularity and to advance her own ambitions; and Emmy Award winner Julianne Hough in another stellar Broadway debut as Dusty, a pretty, young, and ever-ebullient bimbo, impregnated by the President, flown out to the White House on a private jet to see him, vomiting up blue slushies from morning sickness, and causing more stress for the staff and distress for Margaret. And though the show is not a musical, with Stroman directing and Hough (known from the TV series Dancing with the Stars) in the cast, it’s no surprise that it includes amusing segments of dance and concludes with a mini-concert of feminist anthems by the united women.

The wild action is enhanced by Sonoyo Nishikawa’s high-key lighting and a rapidly rotating set by Beowulf Boritt that shifts with the scenes from historic room to room in the tastefully furnished White House. Costumes by Linda Cho, and hair and wigs by Cookie Jordan, are suited to the women’s personalities and to the scornful (and sometime unwitting) jokes about them.

POTUS‘s adult situations, obscene language, and sexist-based humor might not be for everyone, but they effectively serve to heighten the socio-political farce and to drive home the closing feminist message, “You’re gonna hear me roar.”

Running Time: Approximately one hour and 45 minutes, including an intermission. 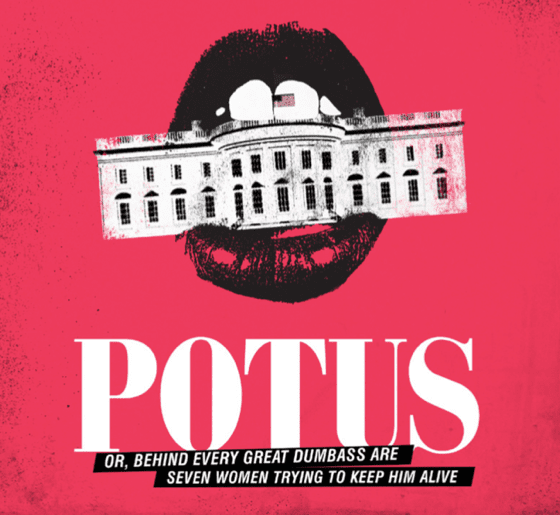 POTUS plays through Sunday, August 14, 2022, at the Shubert Theatre, 225 West 44th Street, NYC. For tickets (priced at $39-250), go online. Everyone must show proof of COVID-19 vaccination to enter the building and must wear a mask at all times when inside.