A one-man show is all about vulnerability. To touch your audience, you have to bare your inner world. You have to let audiences see crevices and corners of your personality only a priest or a psychologist normally would. JR “Nexus” Russ does this and more in his engaging one-man show, Crossroads, Detours, and Exits, which The Welders, a playwrights’ collective, world-premiered May 4, 2022, at Busboys and Poets’ 14th and V location in Washington, DC.

Intersectionality is a term that is tossed about these days. It is defined as: “The interconnected nature of social categorizations such as race, class, and gender as they apply to a given individual or group, regarded as creating overlapping and interdependent systems of discrimination or disadvantage.”

Back in the 1970s when they met cute, in a cafeteria, his father, who worked at IMF (International Monetary Fund), and his mother, who worked at the World Bank, were classified as “Oriental” and “Negro” — quite a contrast between then and now. Russ highlighted such contrasts throughout his evening of storytelling.

Russ spoke with fervor about the dichotomy of suffering Black rage because of how he was mistreated at a job and by a roommate, but then being seen as less-than-Black, by other Blacks. Russ recalled Black Washingtonians telling him: “You don’t sound like you come from here… I still don’t know what that means.” He recalled a Black Lyft driver once thought he was white, based on his voice (the driver didn’t see him enter the car).

“I have anger management issues,” Russ said. Russ told a story that highlighted the juxtaposition between white liberals’ idea of diversity and what he sees as diversity. Russ was on the Global Leadership Conference at Burning Man and noticed that some of his fellow board members felt they could make Burning Man more diverse by lowering ticket prices, while he felt that diversity could be achieved by word-of-mouth invitations.

“I don’t want to become a caricature of myself, or reinforce some stereotype of an angry Black person,” Russ wrote in his blog. “And it is this fear that has kept me from even authentically exploring, much less feeling, anger.” I could relate to him.

Russ contrasted the myth of the contented Asian with the reality that any of us — of any ethnicity — can experience suicidal or depressive thoughts. He said that some Asians have “smiling depression.” He told the story of a horrific murder that was committed within his extended family, which he thinks could have been a symptom of or possibly caused by “smiling depression.”

He shared yet another contrast: Russ was diagnosed with ADHD at the age of 20. But he is very well educated. He went to St. Albans and has a Bachelor of Arts in Dance from the University of Maryland, College Park; he earned a Master of Arts in Arts Management from American University. Currently a member of The Welders, Russ has been a Story District board member, a Synetic Theater company member, and an Adventure Theatre production manager. Russ is “about to enter a doctorate program in communications at Howard University.”

Russ contrasted between people of his ethnic background in real life and in the movies and on TV. He recounted listing, along with friends, the number of Filipino actors they could name in popular culture like Ernie Reyes Jr., from Teenage Mutant Ninja Turtles.

For a man named after J.R. Ewing from the TV soap opera Dallas, Russ with his partner has been taking in lots of TV lately. “We’ve been inhaling everything Black,” Russ said — shows like Housewives of Atlanta, Insecure, and RuPaul’s Drag Race.

“This show is both the most exciting and the most terrifying performance I will have undertaken in my life,” Russ said in an interview. This reviewer liked the show but had a sense that the narrative could have been tighter. Perhaps the show could benefit from additional workshopping. Those seeking to learn more about people who are not like themselves should see this show and let Russ be their storyteller for the night.

Running Time: Approximately one hour with no intermission. 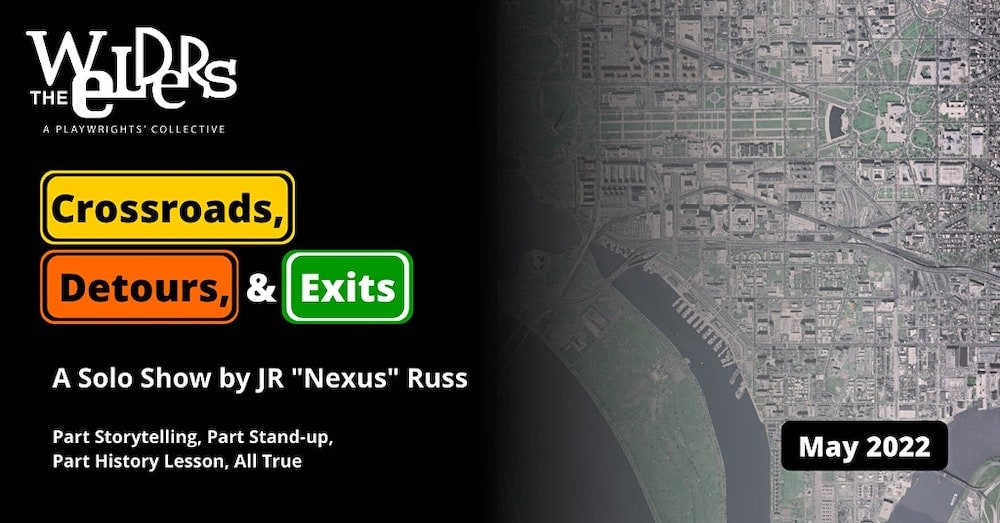 Crossroads, Detours, and Exits is being presented by the Welders performing at various DC venues on different dates (see below). Single tickets are ($20 to $40) and are available online.

COVID Safety: According to the DC Government, effective March 1, 2022, licensees [restaurants serving liquor] are no longer required to have patrons wear face masks to enter the interior of their establishment. Find complete protocols here.

Read his bio here and find his blog here.

The Welders is a DC-based playwrights’ collective that provides an evolving, alternative platform for play development and production. Through our platform, we inspire and encourage each cohort of producing playwrights to:

SEE ALSO:
Next from the Welders: A solo show of intersectionality by JR ‘Nexus’ Russ (interview feature by Gregory Ford)