The 2022/23 season lineup at Everyman Theatre has been announced by Founder and Artistic Director Vincent M. Lancisi and Managing Director Marissa LaRose. The seven-play season marks the organization’s 32nd, with a varied roster featuring stories from a wide range of playwrights and perspectives. The distinctive, LIVE theater experience for Everyman patrons offers more access through both in-person and digital opportunities.

Everyman Theatre kicks off its season on West Fayette Street this September with seven productions through July 2023. First up is the World Premiere, Dinner and Cake, by first-time, DMV-based playwright Tuyet Thi Pham, which runs from September 6 to October 2. James Goldman’s comedic in tone yet dramatic in action, The Lion In Winter runs October 18 to November 13. The holiday season brings an international fan favorite to Everyman, Ken Ludwig’s Baskerville: A Sherlock Holmes Mystery, slated for December 6 to January 1. From January 24 to February 19 is Charly Evon Simpson’s richly-layered play Jump that examines mental health and the human connection. From its run at Lincoln Center in 2020, comes Adam Rapp’s latest play The Sound Inside, running from March 7 to April 2, followed by Harvey, the Pulitzer Prize-winning comedy by Mary Chase, which runs April 25 to May 21. Everyman’s 32nd season wraps up with a newly-reimagined celebration of the music of Broadway titans, composer John Kander and lyricist Fred Ebb, with The World Goes ‘Round from June 6 to July 2 – helmed by Baltimore’s own Kevin McAllister, Artistic Director of ArtsCentric. 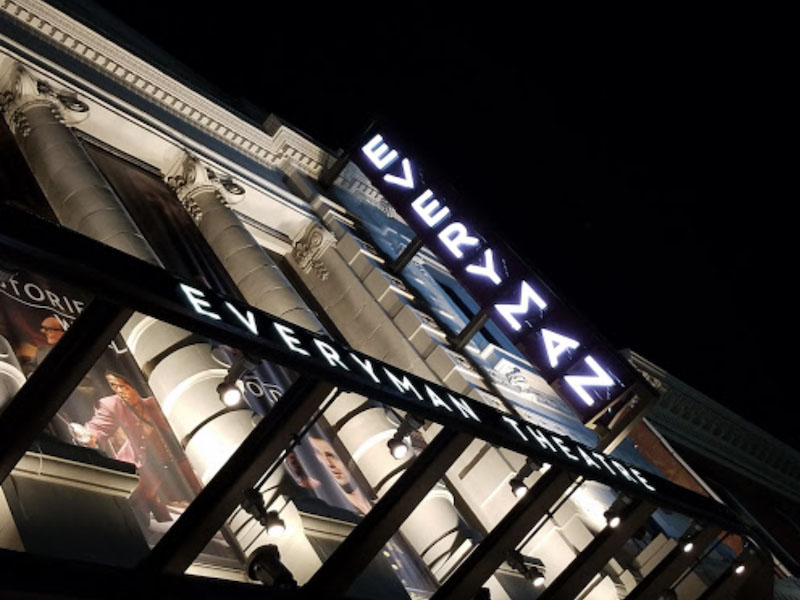 “I look forward to introducing our patrons to these seven plays that fit perfectly together and seem just right for our times,” says Lancisi. “I found myself reaching back for some of the jewels that bring audiences joy while embracing the new voices who will provide us with the classics of tomorrow. Though wildly different in style and substance, a theme emerged among these plays that really resonated for me, which is that nothing is really what it seems. Life is chock-filled with discoveries. We’re exploring all kinds of relationships too, with ‘Great Stories, Well Told’ that reflect the richness and diversity of our great city. Together, these plays make for a riveting, entertaining, and genuinely joyful season of theater.”

Mylinh has the chance to boost her career and make important connections in her new home in Washington DC – all she has to do is translate a simple dinner meeting between her friends’ parents – American and Vietnamese in-laws. When the two couples clash over the course of the evening, Mylinh must navigate and defuse the awkward and complicated cultural, national, and social politics between the two countries that make up her own unique identity.

A family feud of imperial proportions! Set during Christmas 1183, Lion tells the wickedly amusing tale of King Henry II, his imprisoned queen, Eleanor of Aquitaine, and their three entitled, double-dealing sons who vie for the throne. Best known for the film adaptation starring Peter O’Toole and Katharine Hepburn, this viciously funny drama is a high-stakes chess game where the pieces constantly change and no one is spared the sword. Betrayal, treachery, and fights to the death – just another joyous Royal Family Christmas!

From the award-winning mastermind Ken Ludwig (Agatha Christie’s Murder on the Orient Express), comes a fast-paced comedy about everyone’s favorite detective solving his most notorious case. Sherlock Holmes and Dr. Watson must crack the mystery before the family curse dooms its newest heir. Watch as our intrepid investigators try to escape a dizzying web of clues, silly accents, and deceit. Can our heroes solve the mystery in time? Join the fun and see just how elementary the truth can be!

An unexpected bond connects two strangers who meet on a bridge and have more in common than they could ever have imagined. And while this poetic play looks at grief and loss from many vantage points, Jump is also a hopeful, breathtaking, and even whimsical exploration into the buoyancy of hope and the power of human connection – sister to sister, parent to child, stranger to stranger. From an exciting new voice in American theater comes this magical story about the process of letting go.

In this suspenseful drama we meet Ivy League writing professor Bella Lee Baird and her talented yet mysterious student, Christopher Dunn. Bella helps Christopher with his novel that eerily mirrors his own life. The two form an unexpectedly intense bond and their lives and the stories they tell become intertwined in unpredictable ways. Christopher seeks a mentorship while Bella asks an unthinkable favor. Everyone has a story – the question is how it ends. Nominated for six Tony Awards, including Best Play.

It’s 1944, and Elwood P. Dowd, (Jimmy Stewart in the iconic movie), insists on including his BFF Harvey in all of his sister Veta’s social gatherings. Trouble is, Harvey is an invisible six-foot-tall rabbit! When Veta tries to have Elwood committed to a mental institution, a comedy of errors ensues. Harvey begins to have a positive influence on the hospital staff, who realize that he may not be so bad after all? This family-friendly, Pulitzer Prize-winning gem is one funny bunny of a tale (tail?)!

This newly-updated and brilliantly arranged tribute to musical theater titans, John Kander and Fred Ebb, is filled with humor, romance, drama, and timeless hits. From Cabaret to Chicago, and Kiss of the Spider Woman to The Scottsboro Boys, the 20+ songs and stories from this reimagined celebration features unforgettable gems like, “Maybe This Time,” New York, New York,” and “All That Jazz” that made household names of Chita Rivera, Liza Minnelli, and Bob Fosse!

Looking to the new season while also reflecting on the current one, LaRose says, “Vinny and I are so proud of Everyman at this moment. Along with the hardworking, dedicated staff, Resident Company, and Board, we have navigated two full seasons and a complete roster of education and community engagement programming with so much unknown and so much at stake. As we lead the way to recovery, the bold, celebratory spirit of this new 2022/2023 season, matched with our innovative and robust education and community programming, brings even more of what Baltimore audiences have come to know and love about Everyman Theatre. For 32 years and counting, Everyman has demonstrated why theater as an art form is so vital to our community, and this season amplifies it even greater.”

Everyman Theatre’s Department of Education and Community Engagement will also offer programming throughout the year, ensuring opportunities for the whole family. Programming ranges from live events, innovative in-person and digital content, classroom residencies, community partnerships, and in-person and virtual field trips. During each production, the theater offers a Childcare Matinee program with an arts class for children while parents enjoy the show; a Theatre Night for Teens (TNT) to include the performance, conversation with artists, and dinner; Cast Conversations; and, an art gallery inspired by the show featuring the work of a local artist. Classes are announced seasonally for lifelong learners of all ages to discover their inner creativity (recent students ranging from ages 3 to 93). And this summer, in-person Summer Camp is back!

New subscriptions for the 7-play season start at only $213 and are available starting Monday, June 6 by visiting everymantheatre.org or calling 410.752.2208. Box office hours (315 W. Fayette St. Baltimore, MD 21201) are Monday – Friday from 9 am until 6 pm, and Saturdays from 10 am until 5 pm. Single tickets for the seven-show season go on sale Monday, August 1. The organization also plans to make at least the first three productions available for digital access.

Everyman Theatre is supported in part by grants from The Maryland State Arts Council (msac.org), The Citizens of Baltimore County, Mayor Brandon M. Scott, and the Baltimore Office of Promotion and the Arts.

Everyman Theatre is a professional Equity theater company celebrating the actor, with a Resident Company of Artists from the Baltimore/DC area. Founded in 1990 by Vincent M. Lancisi, the theater is dedicated to engaging the audience through a shared experience between actor and audience seeking connection and emotional truth in performance. Everyman is committed to presenting high-quality plays that are affordable and accessible to everyone. The theater strives to engage, inspire and transform artists, audiences, and communities through theater of the highest artistic standards and is committed to embodying the promise of its name, Everyman Theatre. Everyman Theatre is a proud member of the Bromo Tower Arts and Entertainment District, the Market Center Merchants Association and the Greater Baltimore Cultural Alliance. Lancisi partners with Managing Director, Marissa LaRose in leading the organization.

Everyman Theatre stands in solidarity with Black, Indigenous, and People of Color, and AAPI communities and is committed to an equitable, diverse, and inclusive atmosphere at every level of our organization. To learn more, visit our website at https://everymantheatre.org/about-us/everyman-c-a-r-e-s/