Amas Musical Theatre’s hilarious musical comedy Romeo & Bernadette: A Musical Tale of Verona and Brooklyn made its critically acclaimed Off-Broadway debut at A.R.T./NY in January 2020, when I first reviewed it (and loved it) two months prior to the pandemic shutdown of theaters. It’s now back Off-Broadway for a limited engagement at Theater 555, and the witty mash-up of Shakespeare’s iconic tale of starrrrrr-crrrrrossed young loverrrrrs with 1960 pop culture is even bedduh than it was befaw. [Please note: for those of you who aren’t from Verona, the r is rolled; for those who aren’t from NYC, the r is silent – as you’ll learn in this sidesplitting show.]

When a Brooklyn Girl is left weeping at a histrionic community theater production of Romeo and Juliet, the Brooklyn Guy who brought her – and really couldn’t wait for the characters to “Die Already” but wants her to think he’s empathetic and smart so she’ll go home with him – makes up a current 1960 sequel to the story that keeps Romeo alive. Waking up 400 years later, after having taken the sleeping potion, not the poison, Romeo spots the young tourist Bernadette Penza, who looks just like his Juliet, and follows her around Verona (where she’s vacationing with her parents) to Brooklyn (where they’re from and have returned).

The problem is, her father’s a crime boss and she’s already engaged to the wannabe mobster Tito and they’re in the midst of a war with the Del Canto family that recalls the feud between the Montagues and Capulets (Brooklyn Guy WAS paying attention to the Shakespeare play) and the Del Canto son Dino has taken Romeo in after Tito attacked him on the street and “He talks funny, he’s from Europe” and “There’s More” – a lot more, and it’s all riotously clever and over-the-top funny, while managing to stay surprisingly in line with the main plot points and moral of Romeo and Juliet.

Directed and choreographed with non-stop energy and laughs by Justin Ross Cohen, the zany follow-up story, with book and lyrics by Mark Saltzman, makes farcical references to the stock characters, themes, language, and accents of such mid-century American classics as Grease, The Godfather, The Honeymooners, and Saturday Night Fever, which make it less a parody of actual Italians and Brooklynites than of how they were portrayed at the time. It also has more than 20 lively numbers set to music adapted from traditional Italian songs and tunes, with top-notch arrangements, orchestrations, and musical supervision by Steve Orich and music direction by Aaron Gandy.

The returning original cast of ten – Michael Notardonato as the Brooklyn Guy and Dino, Nikita Burshteyn as Romeo, Anna Kostakis as Bernadette, Carlos Lopez as her father Sal Penza, Judy McLane as her mother Camille, Zach Schanne as her fiancé Tito, Michael Marotta as Dino’s father Don Del Canto, Ari Raskin as the Brooklyn Girl and Bernadette’s BFF Donna, Viet Vo as the Penza bodyguard Lips, and Troy Valjean Rucker in an uproarious range of six male and female roles – masterfully deliver all the wacky comedy, character-defining speech patterns, and powerhouse vocals and dance. As outstanding as the entire company was in 2020, their across-the-board stellar portrayals of the now-familiar roles have become even more impressive and commanding with time.

Among the many notable highlights are Burshteyn’s rich tenor voice, Shakespearean diction, and refined deportment; Kostakis’s well-executed ‘60s-style high kicks and spins; Notardonato’s spot-on greaser demeanor and advice on how Romeo should dress and speak to fit in with 20th-century Brooklyn; Vo’s amusing expression of Lips’ unexpected appreciation of love; McLane’s song and dance with a garbage can lid conveying Camille’s pride in her ancestry in “Verrrona” as a descendant of “The Swan Contessa;” and the harmonious trio of Marotta, Notardonato, and Burshteyn on “A World Away,” with snippets of classic Italian songs that perfectly suit the different characters.

The highly entertaining performances are supported by Joseph Shrope’s dazzling new array of period-style costumes and hair by Daniel Lynn Evans that contrast the looks of Romeo and the later century and evince Camille and Bernadette’s passion for shopping, and Andrew Keister’s expressive sound, Ken Billington’s colorful lighting, and Walt Spangler’s clean and simple scenic design that evoke the inspiration of the Pop ‘60s.

If you’re easily offended by farcical characterizations, just fuhgeddaboudit. Romeo & Bernadette is sharp-witted and fun-loving in its parody of past stereotypes, while affirming Shakespeare’s inherent message of the importance of love and harmony to avert tragedy. 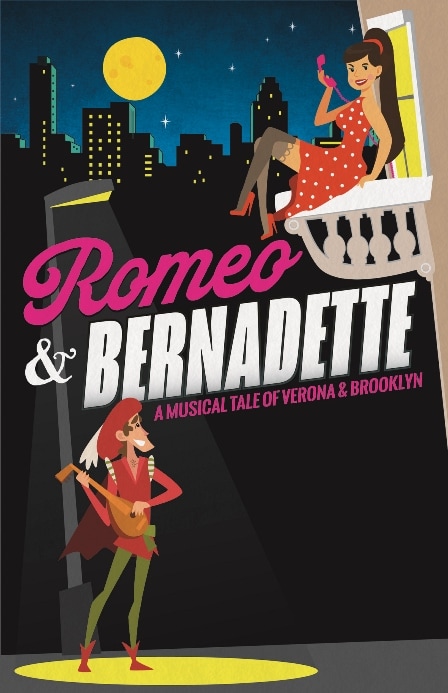