Tap dancing his way to fame since the tender age of five in his hometown of Reading, PA, actor/dancer/choreographer Danny Gardner made his Broadway debut as Lucky in Dames at Sea in 2015, after graduating from Ithaca College with a BFA in Musical Theater in 2005, then booking his first professional gig with the National Tour of 42nd Street. He has since gone on to perform as George M. Cohan in the Rockettes NY Summer Spectacular at Radio City Music Hall, Lady, Be Good! at City Center Encores, and, most recently, back on Broadway with Flying Over Sunset at Lincoln Center, in addition to his many credits in regional theater (including Crazy for You at Signature, Showboat at Goodspeed, and Bach at Leipzig at People’s Light).

For the past eight seasons, Gardner has also been the resident choreographer for the popular concert series Broadway by the Year, created, written, directed, and hosted by Scott Siegel, and presented by The Town Hall. On Monday, May 23, Gardner returns to the historic NYC venue for the latest installment of Broadway by the Year: From Ziegfeld to Moulin Rouge! – a one-night-only history of jukebox musicals and musical revues, celebrating songs from rock ’n’ roll (Jersey Boys, Beautiful, All Shook Up) to classical music (Kismet), country (Ring of Fire), and rhythm and blues (Black & Blue, After Midnight), and highlighting such legendary composers as Eubie Blake (with Eubie!) and Fats Waller (with Ain’t Misbehavin’).

Gardner is not only featured in the all-star cast, which includes four-time Golden Globe and Emmy Nominee Tony Danza (Taxi; Who’s the Boss?), Tom Wopat (Annie Get Your Gun; Chicago), and Douglas Ladnier (Jekyll & Hyde; Sweeney Todd), but also created the high-energy choreography for the song-and-dance numbers with the Broadway by the Year Dance Troupe.

Danny spoke with me in advance of Monday night’s show to answer some quick questions about himself, the upcoming performance, and his love of dance.

Danny: Crazy for You. I don’t know if that’s actually considered a jukebox musical, but it’s based on the Gershwins’ 1930 musical Girl Crazy, it’s all Gershwin music, and it was created after they passed away, so I think it counts.

Tap. And I specifically love the single wing with the double toe.

Lucky. He’s so positive and always ready to help his friends out. Plus, he gets married at the end – and I’m getting married in June!

I would love to do George in Sunday in the Park with George.

My brother was a freshman in high school doing Mame. He was playing the part of Patrick and they needed his son Peter, who has five lines, to come out wearing a turban – and I got the part. When Auntie Mame delivered her famous line, “Life’s a banquet, and most poor bastards are starving to death,” I remember thinking, “Wow, you could swear,” and I remember it getting such a big laugh, and I thought, “This is fun!” I was about twelve.

I recently became vegan, so a Britta with water, tomatoes, and spinach.

I love the creative license that Scott allows me. I can explore my performance and my choreography in so many different styles that it’s become such a rich creative outlet for me.

Choreography. Especially because of the time we have to put it up, with so many dancers involved, along with all the other acts.

I’m excited about “Diamonds Are a Girl’s Best Friend.” I’m choreographing it but not performing in it. Haley Swindal is singing and eight women are dancing with long rhinestone necklaces that Scott let me buy for the number, so it will really be fun.

In one of my first Broadway by the Year shows, I did “Touched in the Head” from the little-known 1930s musical comedy Sea Legs, about a guy who’s crazy in love. I come out in a big black coat, then take it off, and underneath I’m in a straightjacket, tap dancing! Because most people aren’t familiar with the show, it took the audience a while. At first they were wondering, “What is happening?” But then came the rolling laughter as they were getting the joke; it was exciting to hear the growing reaction.

I’ve recently gotten into gardening and I love it. I was doing a show in Michigan this spring, and on Easter I went out and bought some plants and planted them in front of the cast housing.

Oh, this sounds so cheesy – seeing my fiancée!

The history is so unique. So many artists have performed there in so many different genres, utilizing it in a community-based way. It’s such an honor for me to be a part of that.

Thanks, Danny, for a fabulous fifteen minutes plus! Looking forward to seeing you at The Town Hall on Monday. 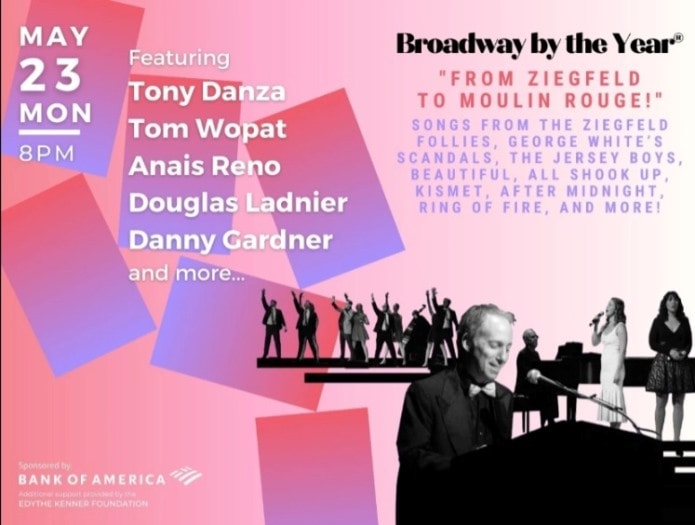