Tia Shearer Bassett’s one-person performance of Kenneth Koch’s “poem-play” Edward and Christine is a fun example of the creativity and intimacy of live theater. Performing on Zoom from “a corner of my living room,” Bassett plays over 100 characters in more than 50 locations in under an hour and a half. As she explains before beginning, the scenes are not in chronological order, so that the two title characters meet, fall in love, marry, and have a child all “out of sequence.” The hope, Bassett says, is “letting the words and images wash over you” without worrying too much about what they all “mean.” In collaboration with Deb Sivigny and Anna Lathrop, Bassett translates this feeling onscreen.

Bassett uses her hands to represent the two main characters, one marked “E” for Edward, the other “C” for Christine. Other characters are briefly her hands as well, with simple props to distinguish them, such as a shawl for a composer’s mop of hair, or an eyepatch draped around a thumb for a working-class man. Other characters, like Egyptian gods, appear as stick figures, or paintings, like icons for Edward’s parents. Bassett herself becomes characters, donning a mustache, a shawl, or a necktie around her forehead.

Bassett switches between the characters quickly and effortlessly. Many of them are French or Italian, and all the different accents give many laughs. Some scenes are heartfelt, though, such as when Christine, after a terrible medical emergency, wonders if she will be able to love her baby.

Bassett uses simple props to set the scene. A pizza cutter rolling on her arm, for instance, becomes a bicyclist in Holland. Toy soldiers in front of the “stage” are part of Edward’s squad. Cards on a clothesline behind her indicate where each scene takes place.

This performance is unusual, to say the least. There are times when it is difficult to know exactly what is going on. But Bassett’s energy and humor keep the audience interested. One scene, for example, set in Medieval England, features St. Ursula trying to find 11,000 virgins to go on a crusade. Done in more modern language, it is hilarious, even if its connection to the rest of the play is unclear.

And Bassett is an inviting host. In emails before the performances, she asks audiences to bring a stuffed animal, “your favorite drink,” and Q-tips, all of which are used in the play. Just before the beginning, she sings and plays on the ukulele. Edward and Christine is a showcase of versatile acting, showing what live theater is capable of even over the internet. Don’t miss it.

Edward and Christine plays on Zoom on select dates through June 17, 2022. For more information and to purchase tickets (pay-what-you-wish), visit Eventbrite. The show is recommended for adults aged 18 and up.

SEE ALSO:
In Their Own Words: the creators of ‘Edward and Christine’ share their unconventional take on the show (feature by co-creators Tia Shearer, Deb Sivigny, and Anna Lathrop) 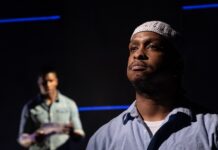 A brothers’ bond heart-breaks in ‘Bars and Measures’ at Mosaic 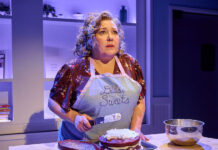 ‘The Cake’ at Prologue Theatre comes with baked-in clichés 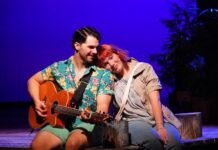 ‘Escape to Margaritaville’ charms at Riverside Center for the Performing Arts