The theatrical conceit of Kimberly Belflower’s John Proctor Is the Villain, now playing in a thrilling production at Studio, is so damn dazzling I hardly know where to begin. A class of eleventh-graders in a tiny town in Georgia has been assigned to read Arthur Miller’s famous play The Crucible, the backstory of which turns on the married farmer John Proctor’s adulterous intercourse with a teenage orphan, Abigail. Because this sin of the flesh happens in pious Salem, Massachusetts, in 1692, there’s the devil to pay. According to SparkNotes (which gets amusingly quoted in Belflower’s play), Abigail “is clearly the villain,” a seductress and liar and deranged avenger. Not so fast, foreshadows Belflower’s post-#MeToo title: John Proctor is the villain.

As it happens in Belflower’s brilliant devising, the high schoolers’ study of The Crucible coincides with some scandalously analogous goings-on in their own 2018 world: namely,  grown-man age-inappropriate sexual behavior, which the play dramatically divulges. (To say more would be a spoiler. When you see the play, you’ll know why.) Just as these teens (two boys, five girls) are navigating their budding sexual desires, including with one another, they have to reckon with the reality that fine and upstanding adult men they know and trust can be capable of Proctor-like predation. So they look at the sexual politics in The Crucible through the lens of their own lives and they look at the sexual politics of grownups they know through the lens of The Crucible. And they do so in teen-speak with reference to pop idols Lorde, Taylor Swift, Beyoncé.

Has lit crit ever been more lit?

I saw Belflower’s play more than two weeks ago, and it has stayed with me, not least because Belflower’s characters and dialog are so endearingly generation specific. (The students speak in tentativeness; they are constantly saying “yeah no” or “no yeah” — with, like, you know, questioning?) And Director Marti Lyons demonstrates again (as she did in The Wolves) that she gets deeply what’s going on within and among teen girls today, so much so that she may know better than anyone how to keep real all their feels.

The quality of the writing and the caliber of the performances are enthralling, but it is Belflower’s theme that most impressed me — for she has brought to light the emotional and cultural turmoil that is now finding expression in Gen Z feminism.

Gen Z is a generation for whom music is girls’ gateway to self-understanding, and that’s represented vividly throughout John Proctor Is the Villain, culminating in an indescribably beautiful and exultant ending set to “Green Light” by Lorde. (See below for a Spotify playlist Studio Theatre compiled to promote the production.) Early in the play the girls start an extracurricular feminism club, and at one point Nell (Deidre Staples) quotes Beyoncé’s song “Flawless,” which samples a TED Talk by the Nigerian feminist writer Chimamanda Ngozi Adichie. Her words hit a nerve. It is as though she speaks directly to these teens’ experience of having to “make themselves smaller” and not be “too successful” so as to protect the egos of men.

In an exchange in John Proctor Is the Villain, for instance, Raelynn (Jordan Slattery) reflects on the relationship she’s been in with her boyfriend Lee (Zachary Keller). She tells him her identity has been subsumed by being his girlfriend and she’s realized that’s not what she really wants. Whereupon Lee erupts. In an abrupt act of violence, he casually picks up and tosses a chair. Raelynn recoils — and we might well infer that his outbursts have happened before.

This is a generation whose vocabulary can name such behavior — what Beth (Miranda Rizzolo) calls “textbook toxic masculinity.” She says this with reference to the character of John Proctor in The Crucible, but it is clear in performance that all the girls know from life what it means.

Even as this generation is keenly aware of sexism, they can imagine and recognize interpersonal relating liberated from it. For instance, in the sweetest scene in the play, Mason (Ignacio Diaz-Silverio), an adorable underachiever, and brainy Nell, new to the school, are studying together in preparation for their joint class project. At a point in their easygoing collaboration, Mason surprises Nell and us.

MASON
…do you wanna like
hang out?
like
outside of class and feminist club?
I just
I’m really into how smart you are?
which is like a new thing for me and it really
I don’t know if that sounds like a line?
but it’s not?
I mean
I can’t make you believe me that it’s not
but my lines are not usually about brains…

Nell says yes, he beams, she gently reminds him to get back to work, and he does so, still beaming.

Such telling teen moments would seem to be peripheral to the events that drive the play’s plot — the Crucible-adjacent offstage scandals whose shocking revelations rock the students’ world. But as I’ve thought back on what Belflower is up to, I’ve come to wonder if the subtext of these young people’s awkward yet urgent emergence into Gen Z feminism might really be the play’s central storyline. Certainly, that would explain Raelynn’s astounding and apocalyptic monologue near the end, in which she begins by envisioning: 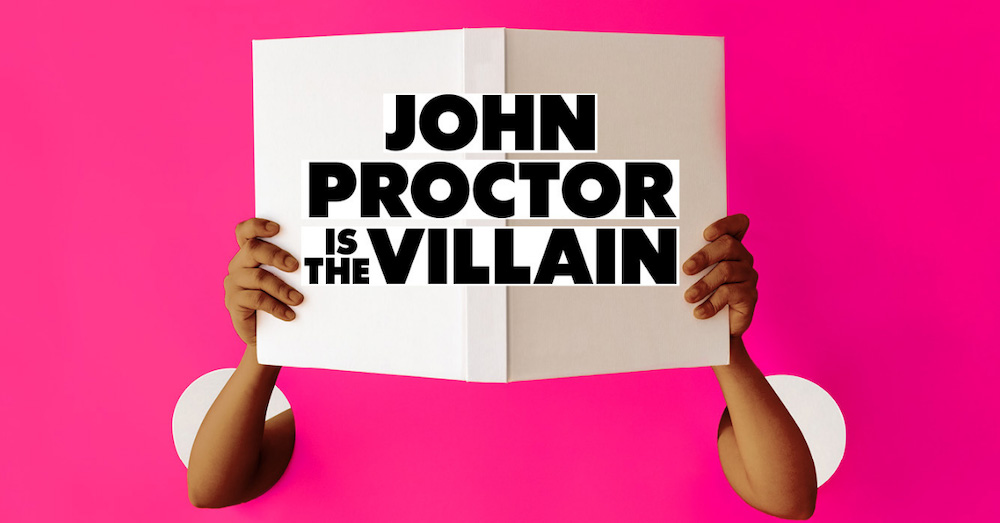 The program for John Proctor Is the Villain is online here.

COVID Safety: Proof of vaccination (or a negative COVID test) and facemask are required. Studio Theatre’s complete Health and Safety protocols are here.

SEE ALSO:
‘John Proctor Is the Villain’ at Studio is provocative and gripping (review by Bob Ashby)