Just when abortion rights in the United States are more in peril than at any time in the last 50 years, Solas Nua is offering a play, Maz and Bricks, that deals with the struggle for abortion rights in Ireland. Underscoring the power of art to address controversy and national crisis, this production warrants serious and major attention. 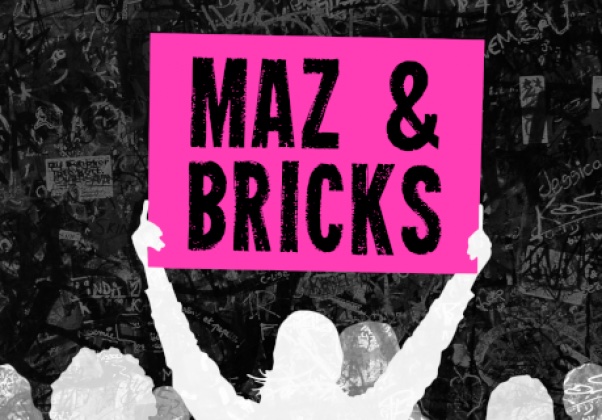 In May, an initial draft majority decision written by Samuel Alito in Dobbs v. Jackson Women’s Health Organization was leaked to Politico. This signaled the Supreme Court’s readiness to overrule longstanding precedents of Roe v. Wade (1973) and Planned Parenthood v. Casey (1992). Roe established that women have a constitutional right to terminate a pregnancy. In Casey, the Court refused to overrule Roe and reaffirmed that the State cannot prohibit a woman from making the decision to terminate a pregnancy before viability.

Roe and Casey established that states can only ban abortion (except when the mother’s health or life is threatened) after the point of viability, which according to Casey is 23 to 24 weeks. Before then, states can impose limited restrictions on abortion, but only if the limitations don’t place an “undue burden” on the woman’s right. The late Justice Ruth Bader Ginsburg believed that the abortion right was essential to women’s equal citizenship.

In Dobbs, at issue is a Mississippi law banning almost all abortions at 15 weeks, with no exception for rape or incest. In Ms. Magazine, University of California law professor Michele Goodwin stated:

[I]t will bring significant harm to all women and all people capable of pregnancy in anti-abortion states, while imposing a death sentence for Black and Brown women.

If this ban is upheld, Roe’s recognition of the right to an abortion before viability would essentially be over. The final decision is expected in late June.

At this critical time, Solas Nua offers an Irish play, Maz and Bricks, by playwright Eva O’Connor, dealing with abortion in the context of the Repeal of the 8th Amendment in Ireland.

The story of Maz and Bricks

In Maz and Bricks, which takes place in 2017, two young people, Maz, an abortion activist from the country, and Bricks, a Dubliner and local charmer, share secrets and experience an intense connection that changes them both. They meet on the Luas, the city’s light rail. Maz is busy making a Repeal-the-Eighth placard and is on the way to a demonstration. Bricks, who immediately assumes she is drawing him, is on the way to see his estranged ex and his adored 4-year-old daughter.

The Eighth Amendment of Ireland’s Constitution (1983) recognized the equal right to life of the pregnant woman and the unborn. It ensured that abortion would only be allowed where the life of the pregnant woman was at risk. It was approved by referendum on September 7, 1983, and signed into law on October 7, 1983. In 2018, it was repealed by referendum.

In the play, a young woman, Eimear Colgan, has died because she was not well enough or financially able to afford an abortion. Maz is there to protest this death and stand up for the right of women to have control over their own bodies. Bricks, who knows little about the subject, doesn’t agree, at least in the beginning.

Artistic Director Rex Daugherty sees Maz and Bricks as a poetic and witty love story, between two traumatized people who help each other to face the future:

The play is really about the two of them facing their traumas. Maz’s trauma is directly related to her abortion, but Bricks’s is about the suicide of his brother. There’s so much vulnerability that they are hiding from each other throughout. It’s the story of these two strangers in Dublin who meet and help each other in surprising ways. Who knows if they ever see each other again? It’s not quite a romance, it’s a little darker than that, a little messier than that, but it’s more true. They’ve both been stuck, and they help each other to get unstuck. The chemistry between the two actors, Emily Kester (Maz) and Jonathan Feuer (Bricks), when they are on stage is amazing too. They make you fall for them both.

Emily Kester, who plays Maz, reflects on the meaning of the play at this moment:

I didn’t anticipate how timely it would be, with reproductive rights at risk across the world. It feels very urgent and alive. I’m very thankful to play a wonderfully written woman character who is without irony, full of rage, but never shrill. A very earnest person.

Abortion in the U.S. today

The production is taking place at a time when nearly 90 percent of U.S. counties lack clinics that provide abortions. To obtain an abortion, women may have to travel long distances, and the cost can range from $500 to $1,000. This expense is not federally funded. Across the U.S., 24 states severely restrict access to reproductive health care. In 2021, state legislatures enacted even more extreme abortion bans and restrictions.

If the Court overturns Roe, 25 states are likely to take action to prohibit abortion. Thirteen states have “trigger bans” that are intended to outlaw abortion immediately if Roe is overturned. Eight states have pre-Roe laws criminalizing abortion that have not been enforceable under Roe; it is possible those states will criminalize abortion as well.

The majority of the American public, however, identifies as “pro-choice.”

A Gallup poll conducted mostly after the draft of a Supreme Court decision addressing abortion rights was leaked finds a marked shift in public attitudes over the past year. After a decade in which Americans’ identification as “pro-choice” varied narrowly between 45% and 50%, the percentage has jumped six points to 55% in the latest poll, compared with the prior measure a year ago.

Pro-choice sentiment is now the highest Gallup has measured since 1995 when it was 56% — the only other time it has been at the current level or higher — while the 39% identifying as “pro-life” is the lowest since 1996.

Things have changed drastically in the 40 years since Roe v. Wade was decided. And they are about to change much, much more.

In her landmark article in The Atlantic, The Future of Abortion in a Post-Roe America (April 4, 2022), Jessica Bruder discusses abortion pills. More than half of abortions in America are done in this way; they are called “medication abortions.”

Ninety percent of abortions in the U.S. are in the first trimester, which is when these pills are used. They allow people to have an abortion in the privacy of their own home. There are also more than 90 abortion funds in the U.S. that help people who cannot afford procedures. There are also extra-legal solutions.

In partnership with the Crosscut Festival, the May 5 Amicus podcast with Dahlia Lithwick featured an expert panel discussion of the Alito leaked opinion. NYU law professor Melissa Murray, noting the caustic and aggressive tone of the writing, added that “not only does it eviscerate Roe and the abortion right; it also makes clear that the problems that the majority identifies with Roe — that it is unmoored from Constitutional text, that it is unrooted from historical traditions in the United States, that it is a constitutional apostasy — the same kinds of arguments might be made for other rights like same-sex marriage or interracial marriage or contraception.”

And what about Ireland? Even before 1983, Irish women utilized the “abortion trail” to obtain abortions in England. As a result of the repeal of the Eighth Amendment, abortions are now allowed during the first trimester, with costs covered by the public health service.

It’s hard to believe that America is really set to move backward. Still, Solas Nua is showing us a way forward, not only by producing Maz and Bricks but with special events associated with the production.

In a post-show discussion on June 10, Karen Mulhauser, the president of Mulhauser and Associates and former director of NARAL, the National Abortion Rights Action League, will discuss the organization and mobilization of activists and the fight for reproductive freedom for all

On June 17, Heather Booth, a progressive political strategist, will share her experiences as a founder of the Jane Collective, an underground service providing abortion care before Roe. Her post-show discussion will also focus on what our world will be like after Roe and what we can do about it. (For other post-show discussions, check the Solas Nua website.)

There is no doubt that the word abortion can provoke a nervous reaction. Emily Kester (Maz) said, “When I tell people we’re doing a contemporary Irish play, and I say it’s about abortion, there is a certain flinch that happens. But I think it’s a difficult personal decision that needs to be viewed as medical. It’s health care.” It is also crucial to women’s rights in our democracy.

Solas Nua has courageously taken on this controversial subject when it is at the forefront of our national conversation. They are highlighting the role of the theater as a public forum and the arts as an environment where human rights are respected and even celebrated. They deserve our gratitude at this dangerous time.

The Maz and Bricks playbill is online here.

COVID Safety: All patrons must be fully vaccinated by the date of their visit. Face masks are required at all times regardless of vaccination status. See the Atlas Performing Arts Center’s complete Health and Safety policy here.

Maz and Bricks
By Eva O’Connor
Directed by Rex Daugherty

Solas Nua, “new light” in Irish, is the only organization in the United States dedicated exclusively to contemporary Irish arts. From their base in Washington, DC, their mission is to bring the best new Irish artistic talent to American audiences. They are celebrated in Ireland for award-winning work that nurtures emerging talent and provides Irish artists with a supportive, warm, and compelling forum in the United States. They are recognized in Washington, DC, and beyond for being dynamic and innovative, and for making a substantial and unique contribution to the artistic and cultural richness of each city, within and outside the Irish-American communities.