Directed by Cathy McCoskey, A Night Out on Times Square features songs from shows such as Birdland, Chicago, Six, Tina: The Tina Turner Musical, Dear Evan Hansen, Waitress, Come From Away, and Company. Jeff Hayes’s on-point piano playing and music direction, along with a cast of superb singers/actors, make A Night Out on Times Square a musical smorgasbord for the ears.

“Keep ’em off balance and they won’t realize you don’t have talent” was a humorous suggestion by Martin Bestimt as he sang “Razzle Dazzle” from Chicago (music: John Kander, lyrics: Fred Ebb, book: Ebb and Bob Fosse). The lovely Alicia Braxton and Lauren Emanuel backed up the magnificent Bestimt.

“Kiss an Angel Good Morning” by the late country singer Charlie Pride was staged as if Darren Midkiff was singing to women at New York City’s Don’t Tell Mama piano bar. Midkiff brought a soulful country-music flavor to his rendition.

I liked what Marissa Papatola did with the lyrics of “Burn” from Hamilton an American Musical (music, lyrics, book: Lin-Manuel Miranda). The song was about the written correspondence between Eliza Hamilton and her famous husband.

The performance of “Birdland” (music: Josef Reich Zawinul, lyrics: Jon Hendricks) was worth more than the admission price. I felt as if I was at Birdland Jazz Club. Braxton, Papatola, Aref Dajani, Arthur Glover, Eric Yeh, Justin Cunningham, Kelly Dobkins, Laura Holmes, and Melanie Mack Williams made this song a high point in the show.

Papatola put me in a film noir detective mood with “Harlem Nocturne (Nocturne for the Blues)” (music: Earle Hagen, lyrics: Dick Rogers). Kathleen Dacruz put her own sultry sauce onto “What’s Love Got to Do with It” from Tina Turner: The Musical (book: Katori Hall).

Glover brought soul and fervor to “What Becomes of the Brokenhearted” (music and lyrics: The Temptations) from Ain’t Too Proud: The Life and Times of the Temptations. Aside from singing, Emanuel also served up great choreography in numbers like “You Learn” (music: Alanis Morissette, Glen Ballard, lyrics: Morissette) from the show Jagged Little Pill and “Six” (lyrics, music, book: Toby Marlow, Lucy Moss) from SIX, which is about King Henry VIII’s six wives. Braxton, McCoskey, Jessica Cooperstock, Dobkins, Holmes, and Papatola played the king’s wives admirably.

I liked the duet “You and Me (But Mostly Me)” from The Book of Mormon (music, lyrics, book: Trey Parker, Robert Lopez, and Matt Stone) by Leslie Blaha and Cunningham. Thanks to their performance, it felt more like a scene than a song to me.

Minimalist but colorful, the scenic design consisted of an upstage painting of Times Square while stage right Hayes was at the piano. There was a shelf of theater mementos downstage left. Set Constructors Grant and Lynne Wagner did a good job here.

Costume Coordinator Alice Page Smyth put the cast mostly in street clothes, except for those performing solos, who were dressier; Bestimt’s bowler hat as he sang “Razzle Dazzle” comes to mind.

The title of A Night Out on Times Square explains exactly what it is and does for its audience. After you see it you’ll definitely be humming the tunes in the evening air. 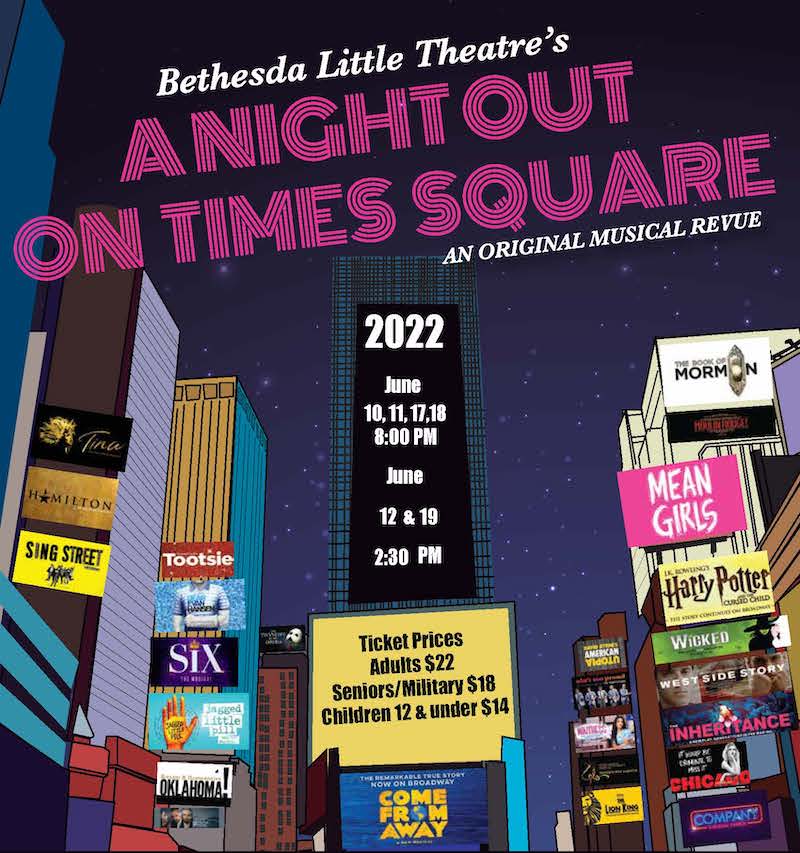 A Night Out on Times Square: An Original Musical Review plays through June 19, 2022, presented by Bethesda Little Theatre performing at Cultural Arts Center, Montgomery College, 7995 Georgia Avenue, Silver Spring, MD. Tickets ($14–$22) can be purchased by calling 202-796-3431, at the door, or online.

COVID Safety: A photo ID and proof (physical or digital) of full vaccination, or a negative PCR test within the past 72 hours, is required for entry. Rapid antigen tests will not be accepted. For more information, please review the Cultural Arts Center’s COVID-19 policy and FAQs prior to arriving.

For the safety of the cast and your fellow patrons, please wear a mask and remain masked for the duration of the show.

A Night Out on Times Square