Dedicated to producing forgotten plays from the past, Mint Theater Company began its “Meet Miss Baker” series in 2019, to give new life to the neglected work of the English woman playwright Elizabeth Baker (1876-1962). The second offering in that initiative is Chains, which was first presented in a single performance at London’s Court Theatre in August 1909. Directed by Jenn Thompson with a perfect combination of humor and pathos, Mint’s current production features a first-rate cast and design, in a resonant period piece that raises significant issues about the drudgery of daily life and work, and the desire for adventure and escape from the chains that bind.

Set in the suburban Hammersmith and Chiswick districts of London, the play revolves around Charley Wilson, his wife Lily, and their border Fred Tennant, who has tired of his monotonous office job and is leaving for the Australian colony in two days to begin a new life there (Baker, it should be noted, had also left London for the South Seas and Australia in the 1920s). His announcement triggers profound reactions and a divide among the Wilsons and their circle of family and friends, as Charley, who longs for a garden larger than the small vegetable patch he tends outside their cramped home, contemplates going with him, Lily is fearful that he will abandon her and their marriage, and they all re-examine their ordinary quotidian existences and the traditional roles they’re supposed to play.

Adding to the dilemma is Charley’s sister-in-law Maggie, who encourages him to get away, largely because of her own dissatisfaction with the stifling shop work she does and her expected wedding to a man she doesn’t love, which, though providing the independence she craves from the daily grind of her employment, would only tie the woman to another unsatisfying situation. Charley’s decision is further exacerbated by concerning information he receives from an office co-worker who stops by the house, and some unforeseen news he gets from Lily. Will he stay or will he go?

A top-notch empathetic cast flawlessly embodies the characters and their attitudes, with Jeremy Beck starring as the disheartened Charley, who agonizes over his options, is subjected to the divergent opinions of his circle, reassures Lily of his love and commitment to her, but advises his younger brother-in-law not to marry too young, before he has time to experience the world. As Lily, Laakan McHardy skillfully provides the counterpoint of a conventional devoted housewife, content with preparing meals, entertaining family and friends, and managing the budget, then suffering the pain and anxiety caused by Charley’s desire to break free from his unfulfilling circumstances.

Peterson Townsend’s Fred Tennant, the lodger, emanates subtle optimism and confidence in his determination to leave the past behind for the promise of a more rewarding future in Australia, despite being called “a fool” by the Wilsons’ opinionated neighbor Morton Leslie, boisterously played by Brian Owen, for giving up his position in London, with no sure prospects of securing a livelihood in a foreign land. But Lily’s sister Maggie, characterized with apropos feminist verve by Olivia Gilliatt, admires Tennant and coaxes Charley to make the change, just as she resists being trapped in wedlock, even with as kind, loving, and supportive a man as Walter Foster – a likeable but obvious mismatch, well played by Ned Noyes.

Rounding out the fine supporting cast are Anthony Cochrane and Amelia White as Lily’s parents the Masseys, who remain laughably steadfast in the their adherence to the established customs of the older generation and discourage both Charley and Maggie from wanting to change the status quo, while reprimanding him for upsetting his wife during an uncomfortable family gathering at their home in Chiswick; Avery Whitted as Lily’s naïve younger brother Percy, who is looking forward to marrying at the age of 22, contrary to the advice of Charley (who exchanged wedding vows with Lily at that same tender age); Claire Saunders as the giggly young Sybil Frost, with whom Percy’s sister Lily, unbeknownst to him, set him up; and Christopher Gerson as Charley’s distressed older colleague Thomas Fenwick, who sees no other choice but to stay with his job. Each and every one of the excellent performances provides insight into the characters, their beliefs, motivations, and psychology, with spot-on English accents and speech patterns (dialect coaching by Amy Stoller) that further define them.

The entertaining and compelling actors, direction, and story, which is as timely today as it was in 1909, are enhanced by a transporting design, with evocative sound by M. Florian Staab, lighting by Paul Miller, period-style costumes by David Toser, and props by Chris Fields. Also of special note are set designer John McDermott’s authentic Victorian interiors, which are brilliantly transformed before our eyes from Charley and Lily’s Hammersmith home to her parents’ place in Chiswick.

Mint Theater has put together a first-class production on every level (there are even antiqued production photos by Thompson in vintage black and white to recall the era, as seen above). If you’re a lover of the classics and want to see a work that has been undeservedly under-represented on the stage, by a perceptive woman playwright who has been largely overlooked, I recommend Chains most highly and without reservation. If you’re not yet, this superb show will make you one. Thanks to the company, cast, and team for bringing it to NYC audiences. 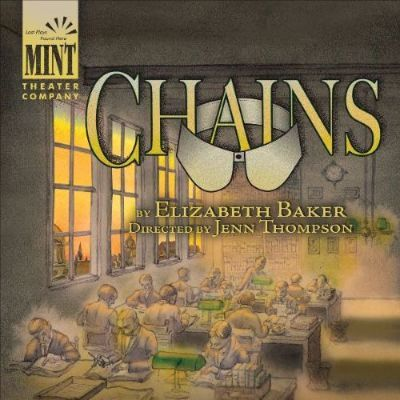 Chains plays through Saturday, July 23, 2022, at Mint Theater Company, performing at Theatre Row, 410 West 42nd Street, NYC. For tickets (priced at $35-80, plus fees), go online. Everyone must show proof of COVID-19 vaccination and a photo ID to enter the building and must wear a mask at all times when inside.

You can get a preview of the show by watching the trailer below: