Caridad Svich’s Ushuaia Blue, now playing as part of the Contemporary American Theater Festival (CATF) in Shepherdstown, West Virginia, creates a vision of Antarctica in crisis. Pieces of glaciers in Jesse Dreikosen’s set glow blue from inside. Ice floes visible on the stage floor in Tennessee Dixon’s striking projection design gradually shrink, as open water increasingly dominates, traversed at times what seem to be the shapes of sea creatures. The sounds of a distressed continent resonate in David Remedios’ complex and innovative sound design: water, wind, the ice itself, sometimes quiet in the background, other times insistent, as when the ice loudly cracks.

Ushuaia, a substantial town in Argentina’s Tierra del Fuego, is a frequent stop on tourist itineraries and a jumping-off place for researchers heading to Antarctica. It is known — not just for purposes of the play — as “the end of the world,” which carries some metaphorical weight in a play about the consequences of climate change.

The play’s leads, Jordan (John Keabler) and Sara (Kelly Rae O’Donnell), are among the researchers who use Ushuaia as a base for their Antarctic studies. A long-time married couple, they are not on the same page emotionally. Their characters are distanced from each other. Each chronically misunderstands what the other is saying. John would like to have a child. Sara demurs. As Pepa (Amelia Rico), a local resident of indigenous Yaghan background, points out, they do not use the term “beloved” for each other.

Svich commented in an interview published in the CATF program that the fragility of the relationship between Jordan and Sara is intended as a metaphor for the fragility of the climate. “The characters and their relationship,” she said, are “a vehicle to explore a larger idea about coexistence with the universe. The planet has been sturdy, but it’s become less and less sturdy because of the damage that humans have been doing to it.”

Sara seems more spiritually attuned to the ice fields of the Antarctic than to Ushuaia or the couple’s home in the southern U.S. She listens to the ice and the water, and she is painfully aware of losses resulting from human-induced climate change, for example noting a field of stones and feathers that was once a penguin rookery. With her strong love of place for the Antarctic, she often spends hours on solo walks on the glacier, annoying Jordan, who is left waiting at the research station

On the last day of a stint at the research station, Sara falls and hits her head during one of these walks, resulting in a months-long coma. The accident is the first thing the audience sees. Much of the rest of the play alternates in time between her lying, unconscious, in a hospital bed in Alabama, with Jordan faithfully at her side, and flashbacks to the couple’s work in Antarctica.

In the hospital scenes, a trio of local women (Tina Stafford, Lori Vega, and Alexandra Palting) circle around the couple, sometimes interacting with Jordan, other times discussing the situation among themselves. Representing the larger community, they frequently sit on stairways to seating areas, silently observing the action.

In Ushuaia, Sara videos her conversations with Pepa, for what she denies is a documentary. In these scenes, Pepa seems a vehicle for Svich’s thinking about the climate and about humans’ relationship to the planet. Her monologues are lyrically written, as are Sara’s, but Rico’s delivery at times verges on the declamatory.

The tone of the play is melancholy, as the characters observe the seemingly intractable effects of climate change. The dramaturgical materials use the fitting term “climate grief” to describe their feelings. Perhaps, as Pepa muses, we are just reaching the end of one cycle — the human cycle — in the long history of nature. Nature will survive and grow, whether or not humans remain a part of it.

Climate change is, of course, a dramatic phenomenon in its own right, but leaving aside the question of whether Sara will recover from her coma, the play offers little in the way of dramatic tension. The playwright and director Jessi D. Hill doubtless want the audience to listen to “the spaces between the words,” as the “Deep Dive Into the Scene” page on the CATF website says. Particularly when those spaces are not underscored by the sound design’s amalgam of nature-based sounds, however, the production’s pacing feels unnecessarily glacial.

Sara’s coma is not only a central element of the play’s plot but a key part of the play’s metaphor. People are often unconscious of their effect on the climate and on one another, Svich might well say, and awakening from this unawareness is a key to reconciliation on a personal and planetary level. What’s needed is for people to truly listen.  There’s a lot worth watching and listening to attentively to in Ushuaia Blue, not least the compelling “end of the world” setting created by the production’s strong technical elements. 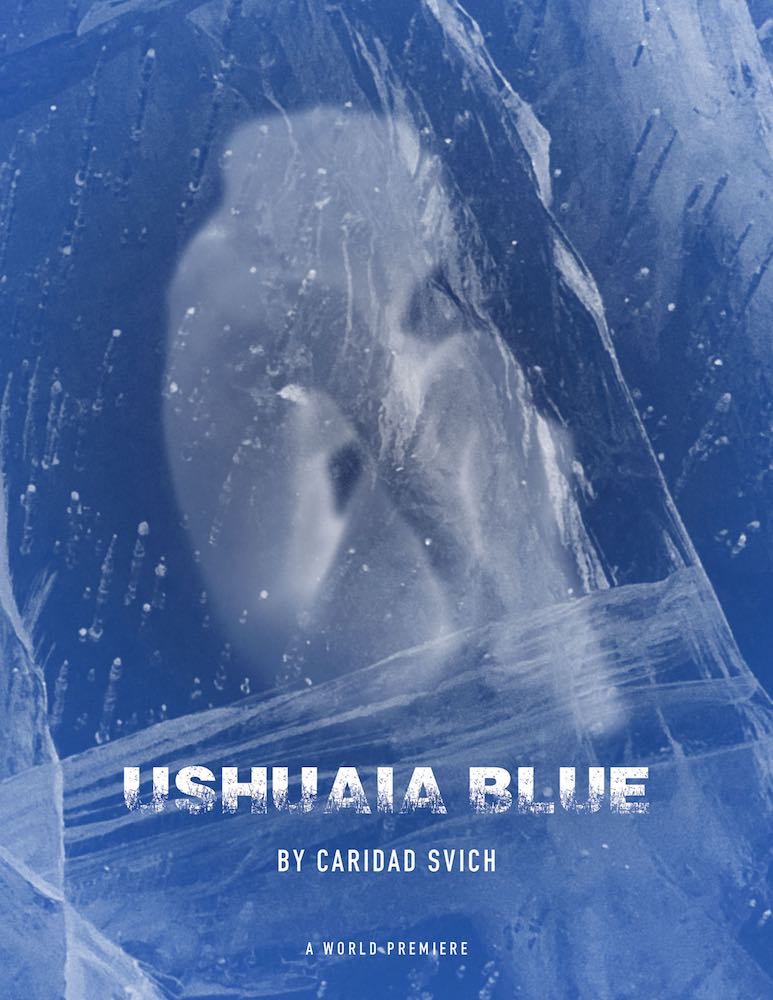 Ushuaia Blue is playing in repertory at the Contemporary American Theater Festival through July 31, 2022, at the Marinoff Theater, 62 West Campus Drive, at Shepherd University, Shepherdstown, WV. The performance schedule is online here. Tickets ($68 regular, $58 senior, or $38 for Sunday evening performances) are available online.

‘Heroes of the Fourth Turning’ at Studio shocks the system