Synetic Theater, the acclaimed center for American Physical Theater, today announced its 2022–2023 season, titled Stranger in a Strange Land. The season features four mainstage productions, including the world premiere of H.G. Wells’ War of the Worlds, and the return of the Synetic classic Host and Guest. Tickets for all mainstage productions are on sale now at synetictheater.org.

“Synetic is thrilled to share the 2022–2023 season, which explores ‘otherness’ and our relationships to those who are different,” remarked Synetic’s co-founder and Artistic Director Paata Tsikurishvili. “When I first came to this country as a refugee, I did not speak the language; it was disorienting but also magical. No matter where you come from, we all know what it’s like to feel different or to fear that which we do not understand. But we also know that feeling of awe and wonder that comes from discovering something new and different. This season captures the incredible breadth and complexity of those feelings in a way that is both timeless and timely.”

The ultimate story of otherness, War of the Worlds will enter the Synetic canon in 2023 with a world-premiere production helmed by Paata Tsikurishvili. H.G. Wells’ science fiction story shocked late-19th century readers with its otherworldly depiction of extraterrestrials invading Earth, and has since inspired countless re-envisionings, including Orson Welles’ sensational radio broadcast in 1938 and Steven Spielberg’s film of the same name. In this latest iteration, War of the Worlds leaps of the page and onto the stage through wordless Physical Theater style and its signature immersive, multimedia production design.

The 2022–2023 season also features the 20th anniversary of Host and Guest, in the only North American production of this iconic Georgian folk poem. Originally staged in the immediate aftermath of September 11, Host and Guest tells a tale of a family that takes in a stranger, only to find he is a member of an enemy clan. The ensuing drama encapsulates the conflict and strife that so often define cultural clashes in a production that the New York Times has called “beautifully choreographed…gory and breathtakingly sad,” and the Washington Post hailed as “spellbinding.”

Other works on the 2022–2023 season include a completely redesigned Dracula — still gothic and darkly wrought, with all-new costumes and lighting design. Synetic’s spooky gala, Vampire Ball, returns in conjunction with Dracula in a one-night-only event just in time for Halloween. Snow Maiden, the charming story of a woman made of snow who comes to life and befriends a lonely man, is an enchanting holiday event for theater lovers of all ages.

In addition to its mainstage professional productions, Synetic Theater will continue to offer its award-winning outreach and engagement programs for young people, including the school-year-long Teen Company program, in-school performances, and winter break and summer break camps. For more information, visit synetictheater.org/education. 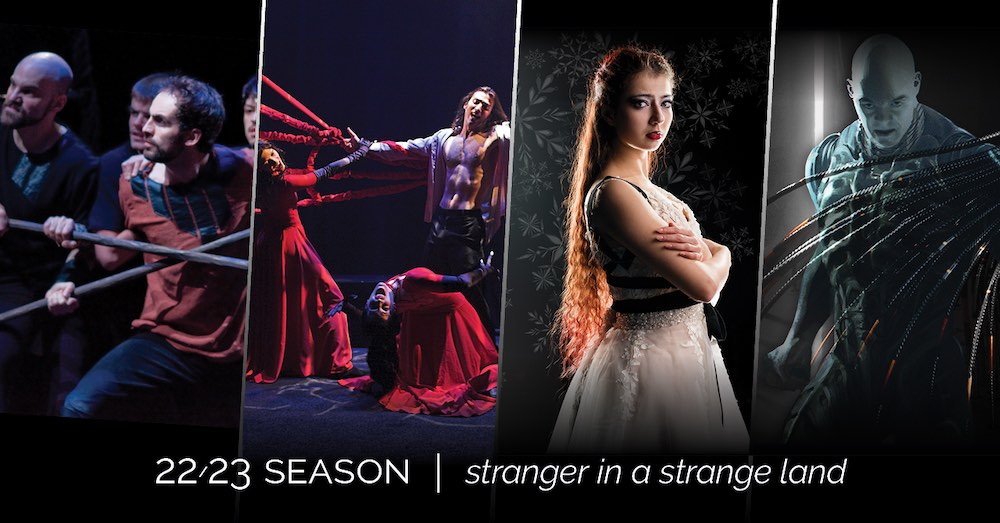 This Synetic classic, based on a Georgian epic poem, tells the ancient story of a family who takes in a lost stranger to discover he is from an enemy clan, and their valiant attempt to save him when their village wreaks vengeance. Performed around the world, Host and Guest is a timely and relevant tale of war, strife, the beliefs that tear us apart, and the humanity that brings us together.

Blood-sucking temptresses, creeping mists, and a chill up your spine . . . Bram Stoker’s classic tale rises again in Synetic’s bold and bloody adaptation of the world’s most iconic horror story. This sensuous and terrifying thriller arrives just in time for Halloween.

Party like a vampire at D.C.’s favorite Halloween-themed dance party. Admission includes a ticket to Synetic’s production of Dracula, followed by a spooky indoor-outdoor dance party with everything you need for a spook-tacular night. We’re talking Dracula-themed cocktails, dancing, physical theater, spooky remixes, fun-sized candy bars, and more. Tickets go on sale at a later date.

In a frozen silver world, a lonely man builds a woman from snow. Based on a 19th-century folk tale and created by Helen Hayes Award-winning choreographer and Synetic Co-Founder Irina Tsikurishvili, Snow Maiden is a story of love, hope, and the transformative power of dreams. This enchanting holiday show for all audiences is performed by Vato Tsikurishvili and Maryam Najafzada, stars of Cyrano de Bergerac and The Servant of Two Masters.

In an epic world premiere, Synetic Theater brings its stunning and immersive style to H.G. Wells’ renowned novel of devastation and faith in the midst of catastrophe. This multimedia fusion of acrobatics, music, and movement makes us question who we are and what is truly worth fighting for.

Memberships are available now and start at $100. Members receive early access to tickets, discounted tickets, and many more benefits.

Visit synetictheater.org for more information, to become a member, and to purchase tickets.

Founded in 2001 by the husband and wife team of Paata and Irina Tsikurishvili, Synetic Theater is a center for American Physical Theater, fusing dynamic art forms-such as text, drama, movement, acrobatics, dance, and original music. Synetic has received a total of 143 Helen Hayes Award nominations and 34 awards, including for directing, choreography, acting, costume design, and best production.