The Washington Stage Guild, having successfully and safely returned to in-person performances in the 2021–2022 season, proudly announces its upcoming year’s repertory, a season of plays that look, fittingly, at the challenges of transition. Whether from childhood to adulthood or faith to doubt, acceptance of the inevitable or a need to find a path to social change, the need to adapt is an important part of life, as the changes of the past two years have shown us all. These four plays, ranging from a witty adaptation of great short stories to one of the greatest plays of the early modern theater, and from an enigmatic dark comedy to a humorous recounting of a true story from the Civil War, explore in many ways the journeys we all must go on as we navigate the world. 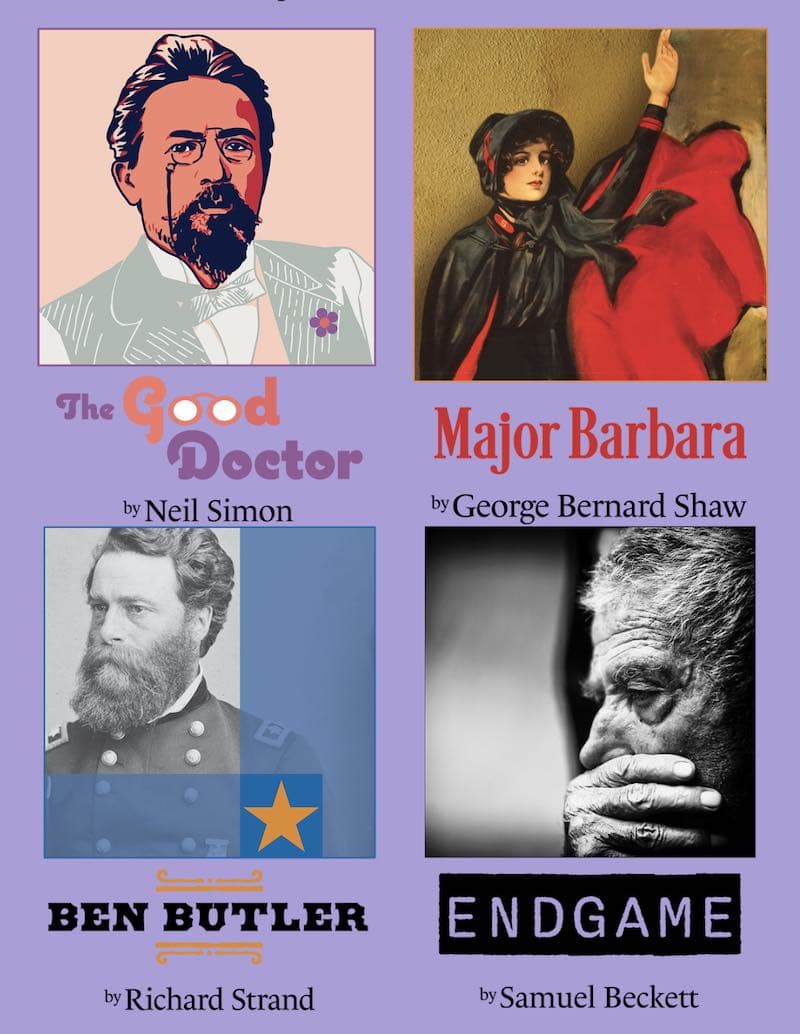 “This is one of the most exciting seasons in our history,” says Artistic Director Bill Largess. “Our very first production in 1986 was Chekhov’s UNCLE VANYA, and we will open with Neil Simon’s wry adaptation of some of the Russian writer’s best short stories, THE GOOD DOCTOR. Next at the Undercroft will be one of George Bernard Shaw’s masterpieces, MAJOR BARBARA, not seen in the DC area in many years. Shaw will be followed by another Nobel Prize-winning playwright as we present Samuel Beckett’s thorny and fascinating ENDGAME.

“And we will finish the season with the area premiere of American playwright Richard Strand’s BEN BUTLER, in which a Union general at the start of the Civil War struggles over how much one can bend the law in a state that is seceding.

“An array of Stage Guild favorites will direct and perform, and of course, a Season Pass—four admissions that can be used in any combination—is the best deal in town!”

Before he turned to the stage, Chekhov wrote some of the world’s greatest short stories. By turns touching and hilarious, they’ve been adapted for the theater by the master of comic dialogue Neil Simon. A Broadway hit in 1973.

The arms trade and The Salvation Army collide in Shaw’s great play about faith, morality, and family battles. Last seen at WSG in our 2001 Helen Hayes-nominated production, our 2022 production will take a fresh look at this always-timely dissection of power and compassion.

A quartet of characters inhabit a nearly empty room, surrounded by nothing, it seems. Do they want it to end, or can they go on with their limited lives? A profound and eerie masterpiece from Beckett, the author of WAITING FOR GODOT and HAPPY DAYS, the latter seen at WSG in 1990.

A Union general, a lawyer before the Civil War, commands a fort in not-yet-seceded Virginia. When a runaway slave arrives making an eloquent plea for sanctuary, whose laws must the general follow? When secession happens, he looks for every loophole he can to avoid returning the young man to the Confederacy. Based on a true story, this is an area premiere.

All Washington Stage Guild performances will be at the Undercroft Theatre of Mount Vernon Place United Methodist Church, 900 Massachusetts Avenue NW, Washington, DC 20001. 2022-2023 Season Passes are available now. Each Pass gives the recipient four admissions that can be used any way: all four at once; two for one show, two for another; or one for each production. To purchase single tickets or Season Passes, go online.