Never shy about “making trouble,” GALA Hispanic Theatre has gone the extra mile to shake up DC’s cultural scene by opening its 47th season with a daring update of what is Spain’s most well-known work of the classic genre zarzuela.

Something akin to the tradition of our own operetta in form (stories delivered by spoken text interspliced with musical numbers and sometimes dance), zarzuela were considered popular entertainment and indelibly stamped Spain with its popularity from the early Baroque era.

Contemporary Spanish playwright Paco Gámez tackled the original text of Revoltosa, penned in 1897 by J. López Silva and C. Fernández Shaw, and updated both its farcical elements and the somewhat more unsavory and misogynistic elements of the original — not only to make connections with the Spanish cultural landscape but specifically to align with today’s cultural norms.

Director José Luis Arellano, who won a Helen Hayes Award in 2016 for his outstanding direction of García Lorca’s Yerma and also directed a delicious Doña Rosita la soltera for the company, has returned for his tenth GALA collaboration. He and Music Director David Peralto have approached this classic, stretching and laying it out for in-depth critical examination. The “stretching” takes the original género chico, one-act form, and makes a two-hour production — género grande indeed!

Imagine a cross between an experimental musical workshop and a performance art deconstruction, such as were particularly popular in the ’80s by companies like the Wooster Group on New York’s Lower East Side. The performers almost never leave the stage but sit around bearing serious expressions to witness the unfolding events and relationships. The set by Clifton Chadick has one long table filling the width of the stage, and it functions at times more like a chamber for debate and commentary than as a community celebration (verbena) in a courtyard. The lines seem intentionally blurred whether it’s the actors or characters who step in to comment. At one point they announce they will present a scene as originally written and immediately expose an almost abusive barrage against women.

The cast of characters is made up mostly of heterosexual couples at different stages of their relationship. We see the span from a young unmarried couple’s high-libido antics to a long-married couple’s bickering by two old souls all too knowledgeable about each other’s shortcomings. Luis Armando Benitez plays Cándido, a man chafing at being so long tied to his wife Gorgonia (Luz Nicolás), whose forceful personality keeps the whole tenement community on notice, meddling in everyone’s business. Tiberio (Christian Laguna) is well matched by wife Encarna (Camila Taleisnik), and the young lovebirds are portrayed by Santiago Alfonso Meza (Atenedoro) and Fran Tapia (Soledad).

At the center of the story is a fiercely independent neighbor (therefore an “outsider”), Mari Pepa (Laura Virella,) determined to live life on her own terms. Her confidence in her own body as well as her physical charms make her the object of desire by all the men but (of course) draws jealousy and ire from the women.

I believe Director Arellano wants us to question, as the actors do, whether a woman today truly live an independent life and whether women should be allowed to express their own sexuality to the degree that men have traditionally done. 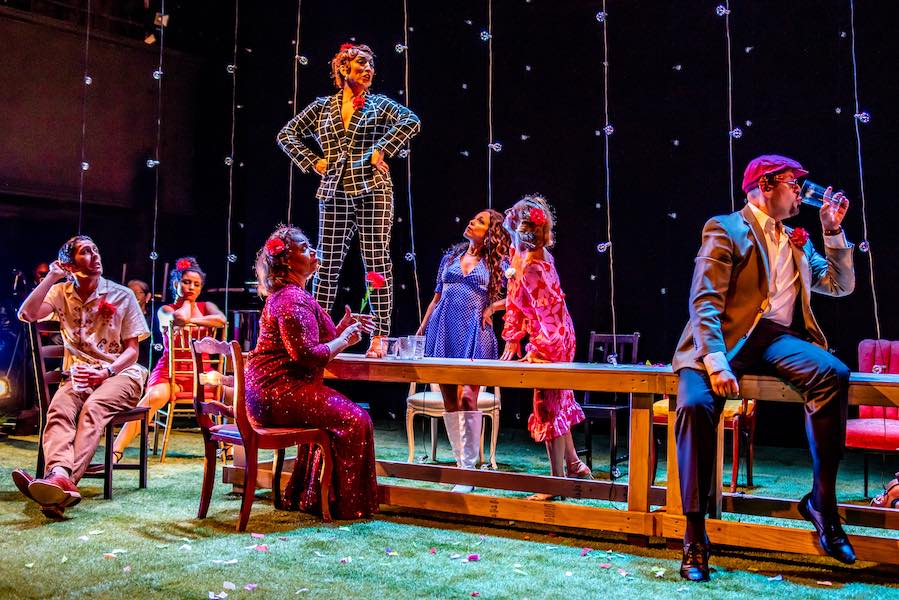 Laguna, Benitez, and Meza perform in one of the best scenes of the evening as a drooling trio who are then joined by Alburqueque when they all think each is off to a hot date with their object of desire. And let’s get real, Miss Red Hot Mari Pepa takes real delight in being as provocative a tease to these men as possible.

The female ensemble goes in and out of focus, and the women often come across as the party spoilers, sitting around as dour as Yoko Ono at a Beatles rehearsal. Of the ensemble, Fran Tapia, who won hearts and minds in GALA’s production of On Your Feet last season, and veteran company member Luz Nicolás rise closest to the challenge of this production’s artful broad physical comedy mixed with sociopolitical commentary, and both ladies etched distinct characters.

Nonetheless, we are all grateful when we can get back to the music and the lovely tunes of the work’s original composer, Ruperto Chapí. Not a note has been excised; that’s how well the music stacks up. Peralto and orchestrator Alberto Granados Reguilón use melodic material to underscore certain scenes, which helps the work breathe and unites dramatic scenes with the music. Form follows content, coming together to demonstrate the lasting value of the work.

The central love story wins our hearts in the music, thanks in great part to the beautiful voices of the two leads Joselu López as Felipe and Laura Virella as Mari Pepa, who excel in both singing and acting chops, and we genuinely care for them in their scenes such as the duet “Por qué de mis ojos.”

As befits the genre, the whole show was un-miked. What a pleasure to experience the human voice unamplified!  While the singer-actors’ training showed distinct differences, from Virella’s and Anamer Castrello’s distinctive classically supported mezzo-soprano vowels to such voices as belonging to Laguna and López, which seem destined for Broadway, the music was a pleasure.  Kudos to Peralto and the condensed orchestral ensemble of eight. This orchestration incorporates a classical guitar; not I assume in the original makeup, it adds informal color and context to the ambiance of the neighborhood.

I only wish Chapí had provided more music to the balance of the evening.

As always GALA Theatre graciously provides surtitles in English for audience members unequipped to follow the Spanish. For any serious theater lover, experiencing the worldwide zarzuela tradition is a must. Arellano and cast have served up what they are calling “variations for today.”

Running Time: One hour 45 minutes with a 15-minute intermission.

Performed in Spanish with English surtitles. 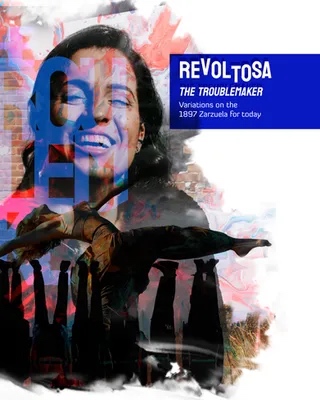 COVID Safety: Masks are mandatory. Proof of vaccination or recent negative COVID-19 test (taken within 72 hours prior to show time) is required for all patrons ages 5+. GALA’s complete COVID-19 Safety Policy is here.

The Revoltosa playbill can be downloaded here.

Revoltosa (The Troublemaker)
By Paco Gámez
Based on the text by J. López Silva & C. Fernández Shaw, with music by Ruperto Chapí
Directed by José Luis Arellano
Music Direction by David Peralto